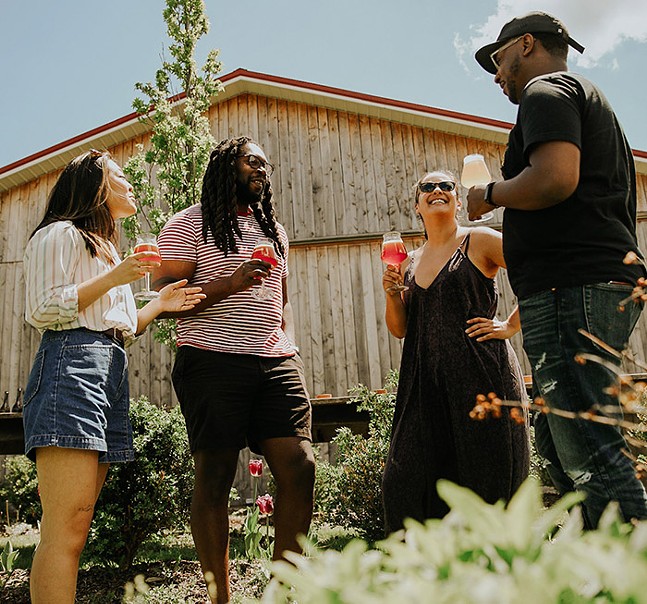 Craft beer festivals are a blast, but there are certain stereotypes that can follow them. Folks often associate fests with lots of incredibly heavy and high ABV beers served in cramped parking lots or taprooms. So how about a festival of wild ales and traditionally made beer, all hosted on a working farm that celebrates the nature of those beverages?

Welcome to PGH Mixed Culture, a new beer festival venture from Cinderlands Brewing and Trace Brewing. Taking place this Sat., July 30 at Freedom Farms in Valencia, the fest aims to bring appreciation and understanding of harder-to-grasp beer styles to a Pittsburgh audience, and it’s doing it by putting together one of the more impressive list of breweries that you’ll see at any beer fest.

For Trace’s Aadam Soorma, the turnout and the festival represents a slowly evolving change towards appreciating these styles of beer, both locally and on a national scale.

“There’s a lot of out-of-market interest in this beer, but there’s also a lot of really good local breweries that are committed to doing saison and wild ale,” Soorma says.

The fest started as an idea from Paul Schneider, the head brewer at Cinderlands and one of the Pittsburgh brewers long committed to these styles. From there, he brought the idea to Trace and their head brewer Zach Colton, whose experience in this realm is as good as anyone's, having done apprenticeship programs at Cantillon Brewery and Mikkeler Brewing, two of the premier breweries in the world for these kinds of beers. From there, the connections came filtering in.

“The other brewery we reached out to before anyone was Allagash,” says Soorma. “They’ve pioneered a lot of how this kind of beer has gained prominence in the United States, so we just reached out to them for some best practices and relationship building, and they threw some skin in the game. So they invited some of their friends who are heavy hitters in the saison realm: Paul has a ton of relationships with brewers, Zach reached out to some of his homies from Belgium, and, as more and more signed on, it looked better, like, we had more and more firepower.”

This kind of festival will be heaven for craft beer nerds, who will be eager to try a lot of beer that they otherwise wouldn’t, but it’s also a chance to expand the palette of people who may not know much about these styles. The VIP session of the festival, kicking off at 1 p.m., will include a live taping of the popular Drinking Partners Podcast, hosted by Barrel and Flow founder Day Bracey and comedian Ed Bailey, and will provide entertainment while teaching about some of the festival's beers.

During the general admission session, there will also be chances to learn about the beers pouring at the fest.

“For PGH Mixed Culture, the showcase is really on this wild, saison, farmhouse, ‘brewer vs. nature’ combo, and that’s what we’re trying to highlight,” says Soorma.

The quality of beer that will be poured at Pittsburgh's first Mixed Culture shows how much promise a festival like this has in Pittsburgh. It’s unique beer, pouring in a unique place.