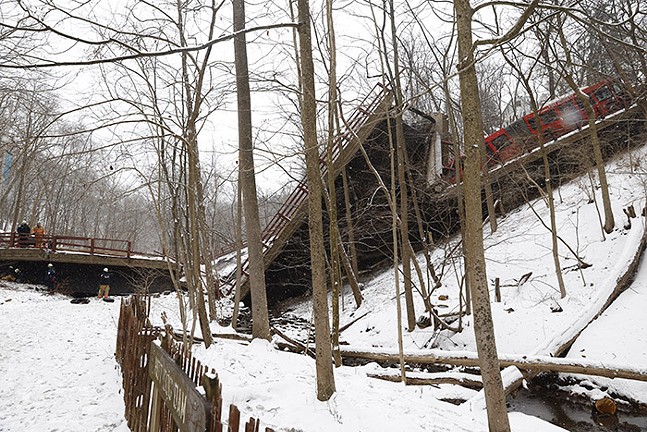 CP Photo: Jared Wickerham
A Port Authority bus involved in the collapse
The disaster declaration that Gov. Tom Wolf proclaimed in response to the Fern Hollow Bridge collapse in Pittsburgh was renewed for six months on March 30 by the Republican-controlled Legislature.

The Pennsylvania Senate voted 48-0 to approve the extension, which authorizes state agencies to use available resources to manage the emergency and waives bidding and contract procedures, until Sept. 30, 2022. The House also approved the measure in a 174-24 vote on March 30.

The 50-year-old bridge in Allegheny County collapsed on an early morning in late January, hours before a scheduled visit from President Joe Biden to promote a $1 trillion infrastructure spending plan. At the time, four cars and a bus were on the bridge. No fatalities resulted from the collapse, but it further fueled calls to fix deteriorating infrastructure in Pennsylvania and nationwide.

CP Photo: Jared Wickerham
Scene of the Fern Hollow Bridge collapse in Pittsburgh, Fri., Jan 28
“With the Fern Hollow Bridge seeing more than 14,000 cars daily, it’s critical that we act quickly to reconstruct it so that commerce can continue, and life is not interrupted,” Wolf said in a statement initially proclaiming the emergency. “This declaration allows us to support the county in getting to work quickly, making funding available, and reducing red tape or other barriers to completion.”

A disaster declaration from the governor lasts 21 days unless the Legislature grants an extension. The process comes after voters approved a GOP-backed constitutional amendment in the May 2021 primary election to curtail the governor’s emergency powers.
Marley Parish is a reporter with the Pennsylvania Capital-Star, where this story first appeared.