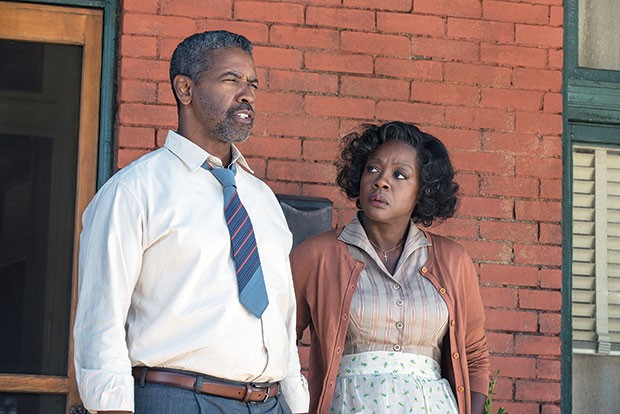 Life on the hill: Denzel Washington and Viola Davis

August Wilson is America’s most-produced playwright this year, but his audience remains largely limited to theater-goers. Meanwhile, popular culture is short on fully realized accounts of African-American life (not to mention great roles for African-American actors). An elegant answer to both problems is Fences, director and star Denzel Washington’s new film adaptation of Wilson’s 1983 Pulitzer-winner.

Like most of Wilson’s plays, Fences is set in the Hill District, and its strengths begin with Wilson’s own adapted screenplay (completed before his death, in 2005): From the start, the film rings with the Pittsburgh-born playwright’s earthy dialogue, alternately hilarious and gut-wrenching. In Wilson’s world, to hear characters sling lines like, “I’ll die and go to hell and play blackjack with the devil before I give you 10 dollars” is nearly half the reward.

Troy’s life was constricted from the start by poverty and racism. He’s proud of providing for his family, but he sees existence as restriction and obligation. There are many reasons that he doesn’t want Cory, a promising athlete, to play football, but he sums them up with “The white man ain’t gonna let you get nowhere.”

Still, Troy’s struggle against his own fatalism and limits (he’s also illiterate), and his quest for dignity, makes him an heroic everyman, too; that fence he’s building in his yard is a multivalent metaphor. The great Washington, unsurprisingly, captures Troy in all his rage, joy and self-pity. Viola Davis matches him as the loving but long-suffering Rose, who quietly but forcefully exhibits her own strength. (Washington, Davis and actors including Stephen Henderson, Russell Hornsby and Mykelti Williamson all reprise their roles from the play’s acclaimed 2010 Broadway revival.)

Fences the play is set entirely in Troy’s backyard; Washington expands the action to include scenes both inside the house and abroad in a lovingly recreated 1950s Pittsburgh. And while his direction is straightforward, just often enough, Washington brings his camera in so we can watch him and his other fine actors at work up close. Wilson’s powerful story, which encompasses not just love, sex, race, oedipal clashes, betrayal and death, but even music and sport, has the scope of a Great American Novel. Washington and company do it justice.