Feeding the Dragon at City Theatre 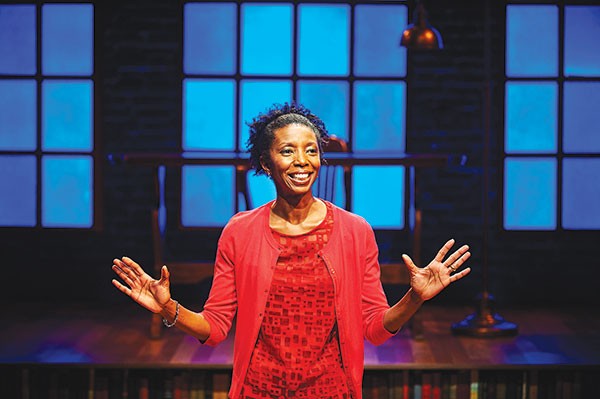 continues through Nov. 20. City Theatre, 1300 Bingham St., South Side. $15-37.50. 412-431-2489 or citytheatrecompany.org
There’s something about Sharon Washington that’s so warm and gracious you’d happily, blissfully spend hours wrapped up in her gorgeous presence. Washington’s in town to premiere Feeding the Dragon, an autobiographical one-woman show she wrote and is starring in, and it’s just about the loveliest 90 minutes currently available on local stages.

The play chronicles her life growing up in a library … yes, “in.” Washington’s childhood was spent in the caretaker’s apartment attached to the St. Agnes branch of the New York Public Library on Manhattan’s Upper West Side. She lived there with her father — the custodian whose duties included, every day, stoking the coal furnace (a.k.a. “feeding the dragon”) — her loving if somewhat astringent mother and her doting grandma.

Washington is an actress of extensive and impressive stage and screen credits, and her performance in Feeding the Dragon is a mesmerizing example of how immediately a superb actor can form a riveting bond with an audience. Director Maria Mileaf molds and shapes that performance forcefully but imperceptibly; the best direction is the kind the audience never sees.

Tony Ferrieri’s set, all polished wood and well-worn books, is as sumptuous as Washington’s performance and I want to make an especial mention of Ann G. Wrightson’s lighting design; she, along with Ferrieri, have created five upstage light panels which both subtlety and brilliantly reinforce the play’s emotional beats.

Feeding the Dragon is Washington’s debut as a playwright and she does a great job conjuring well-defined characters in elegantly simple language; coupled with her spot-on portrayal of them, this work is a gallery exhibition of some of the fascinating people she’s met in her life.

But just so you know: Nothing really happens in Feeding the Dragon. This isn’t a show about plot or incident, and if you don’t realize that, you can waste a lot of time waiting for the play to “begin.” It never does, nor do I think that was Washington’s aim. It’s more a meditation on a particular time in her life and some of the people involved … and you really don’t want to be anywhere else.