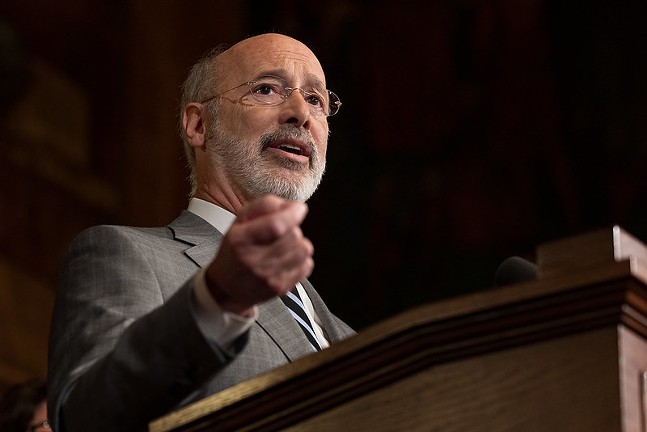 Photo: The Office of Governor Tom Wolf
Gov. Wolf at a press conference in January
A U.S. District court judge in Pittsburgh has struck down the most significant portions of the Wolf administration’s efforts to contain the COVID-19 pandemic, finding that state-imposed limits on outdoor gatherings, its stay at home order, and its business shutdown orders were unconstitutional.

Officials in four southwestern Pennsylvania counties: Butler, Fayette, Greene and Washington counties, brought the action. They were joined by businesses and Republican office-seekers. Gov. Tom Wolf (D-York) has announced plans that his administration will appeal the decision.

“The Constitution cannot accept the concept of a ‘new normal,’ where the basic liberties of the people can be subordinated to open-ended emergency mitigation measures,” U.S. District Judge William S. Stickman IV wrote in a 66-page opinion. “Rather, the Constitution sets certain lines that may not be crossed even in an emergency.”

In his ruling, Stickman, who was nominated to the bench by President Donald Trump in 2019, recognized that “defendants undertook their actions in a well-intentioned effort to protect Pennsylvanians from the virus.”

But “good intentions toward a laudable end are not enough to uphold governmental action against a constitutional challenge,” Stickman wrote.


Judge notes balancing act: "In an emergency, even a vigilant public may let down its guard over its constitutional liberties only to find that liberties, once relinquished, are hard to recoup and that restrictions...may persist long after immediate danger has passed." 5/?

“In an emergency, even a vigilant public many let down its guard over its constitutional liberties only to find that liberties, once relinquished, are hard to recoup and that restrictions – while expedient in the face of an emergency situation – may persist long after immediate danger has passed,” Stickman added.

In a statement, Wolf’s spokeswoman, Lyndsay Kensinger, said the administration plans to seek a stay of the decision, and plans to appeal.

“The actions taken by the administration were mirrored by governors across the country and saved, and continue to save lives in the absence of federal action,” she said. “This decision is especially worrying as Pennsylvania and the rest of the country are likely to face a challenging time with the possible resurgence of COVID-19 and the flu in the fall and winter.”

Monday’s “court ruling is limited to the business closure order and the stay-at-home orders issued in March and were later suspended, as well as the indoor and outdoor gathering limitations,” Kensinger continued.

Public gathering limits in the state, imposed in July, are 25 for indoor events and 250 for outdoor events. Stickman noted in his opinion that he was not asked to address capacity limits at restaurants, and did not do so, the Herald-Standard of Uniontown reported.

While ruling in favor of businesses and Republican office-seekers, Stickman dismissed the plaintiffs Washington, Greene, Fayette and Butler counties that spearheaded the legal action, the Herald-Standard further reported.

Local businesses and residents remain plaintiffs in the suit, the newspaper reported.

Legislative Republicans have complained for months that Wolf, who recently renewed his COVID-19 emergency declaration, had exerted over-broad executive authority to try to contain the pandemic. In July, the Pennsylvania Supreme Court sided with the Democratic administration, tossing a challenge to its emergency authority.

Kevin M. Levy, attorney for the statewide mega-firm of Saul, Ewing, Arnstein & Lehr, who has tracked the administration’s pandemic policies, noted on Twitter that “the longer these restrictions last, the less deference courts will give to the governor. The judge here seems to be skeptical to Governor Wolf’s claims for extraordinary powers since these orders are part of a new normal.'”

In a joint statement, state House Speaker Bryan Cutler (R-Lancaster) and Majority Leader Kerry Benninghoff (R-Centre) praised the ruling, calling it confirmation of their position that “the Wolf administration’s use of emergency authority is unconstitutionally over-broad.

“Given the nature of this opinion, we hope that Gov. Wolf will finally work with the General Assembly to develop a plan that keeps people safe, does not unconstitutionally penalize Pennsylvanians, and takes into account our geographical differences,” the two GOP lawmakers said.
John Micek is the editor of the Pennsylvania Capital-Star, where this story first appeared.

As I predicted over the last few months, the longer these restrictions last, the less deference courts will give to the governor. The Judge here seems to be skeptical to Governor Wolf's claims for extraordinary powers since these orders are part of a "new normal." 9/?