Fearing for your life

The shame is born of hope, I guess. I had hoped that the jury would see that shooting a boy in the back is antithetical to the idea of self-defense. Shooting a running boy in the back is murder and I thought that it was so obvious that even a child could see it. So, I had hoped for justice for Antwon’s mother, this woman who will never see her son in this life again. In some small way, I had hoped that maybe I personally would feel a bit safer in the knowledge that a white man couldn’t just murder me and then go home to a hot meal every night thereafter. But white America needs to prove to us over and over again that our bodies are to be controlled and dealt with and that all they have to do is say that they “feared for their life” to seal the deal. They feared for their white life which is always the first consideration in America. White life. Antwon Rose feared for his life too. He was a child.

White people get angry when the suggestion is made that America is anything other than a meritocracy. They take it personally. They plug their ears to the suggestion that perhaps their “whiteness” has something to do with the fact that they do not, as Black Americans so often have to do, shoulder so much tragedy and then find the strength to pick up and carry on. They make excuses for police, for neighborhood vigilantes, for anyone who kills an unarmed Black person and dismiss the dead always as “thugs” who deserved to die. They would rather be “white” than human. They take it upon themselves to tell Black people all that we shouldn’t have done in order to not get murdered, where we shouldn’t have been, how we shouldn’t have moved, breathed, walked, ran, spoken, or left the house. All in an effort to explain away what they know in their hearts to be true. That being white affords a level of protection in this country that Black Americans will never enjoy.

Then they take to social media to leave the cruelest most inhumane comments imaginable. To spit bile and to dismiss the entire life of a child in order to preserve their belief that everything they may have accomplished in life, they accomplished all on their own. That they are “deserving.” But Black Americans know different. We know that we need to work twice as hard to receive half as much and these are just the facts. 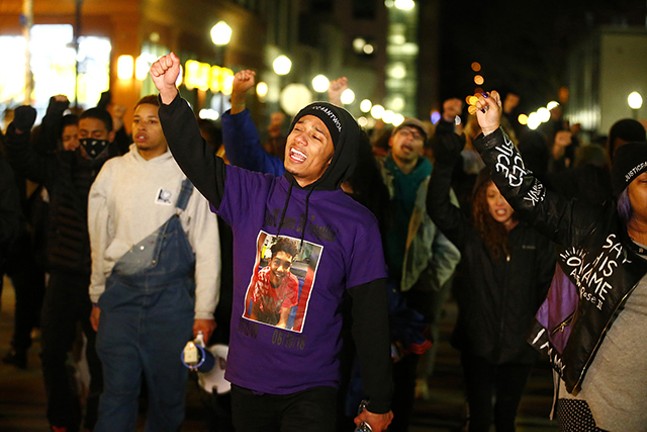 Black Americans always know what white people will say even before they say it. It becomes tiresome. They will tell me that it’s “not all white people.” I know that, but it’s enough of them so that this keeps happening. They will call me hateful and “racist” against white people. I know in my heart that I hate no human being because of something so invented as “race.” They will tell me to “go back to Africa” as if Africa was no bigger than Allegheny County. I should not have to leave my home. I am an American. They make every effort to make you feel like an interloper, a burden in your own country. A country that defines its citizens by hard work, dedication, and the ability to overcome adversity. And if that’s the case, Black Americans are more American than any of them. We are the greatest example of survival, resilience, and triumph in the whole world.

But I am ashamed of what I was looking for as I sat on the edge of my bed watching a live stream of the Antwon Rose verdict. My heart goes out to his family and friends for their unimaginable grief. Before the verdict was announced, my emotions vacillated from hope to despair and back and forth again until a system designed to protect the status quo dashed all hope against the rocks. I’m ashamed because I don’t seem to have learned by now in a city that remains redlined both physically and psychologically. In a country that is home to so many people who are dim, primitive, and desperate enough to believe that the color of skin is a measure of the worthiness of a person. They need to believe it so badly that the need reveals itself pathetic. They can only be tall when someone else is on their knees.

Robert Gregory Bowers is alive. But, Antwon Rose is dead.

I want to say that I won’t have this hope next time. I want to be one of those people who, immediately after these verdicts are announced, can honestly say “I’m not the least bit surprised.” But I am not one of those people. Against my better judgment, I seem to always find myself hoping. And I will have hope again for the next time. And, the saddest thing about that is that I already know that there will be a next time.