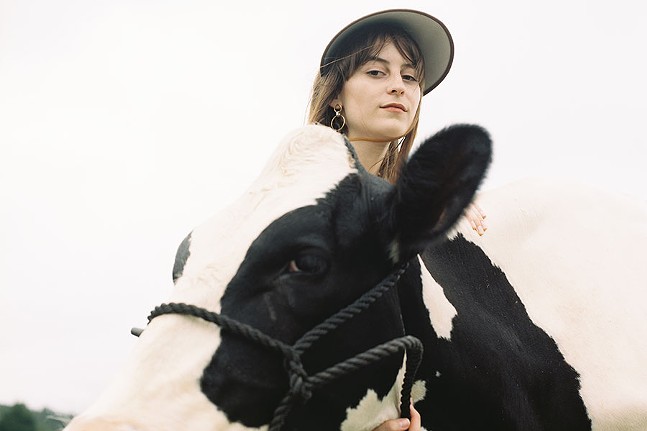 So much of the greater pop zeitgeist is immersed in such an anonymous blend of genres, that its biggest rising stars can be both everything and nothing at once. But Faye Webster takes a more laser-focused approach, zeroing in on warm folk-pop, R&B, and slight textures of the Atlanta hip-hop community that’s embraced her. Her third album, Atlanta Millionaires Club, is essential Sunday porch listening, but brimming with enough personality and lovelorn ruminations to stop you mid-sip. There are enough playful, familiar elements here to make these songs feel lived-in from first listen.


She’s young enough for this to be kind of intimidating. The 21-year-old Atlanta-based artist got off to a quick start, releasing her debut album, Run & Tell, six years ago. That album stayed in a more traditional Americana lane, before getting closer to her more singular space on the self-titled 2017 follow-up. Webster signed to the oddball hip-hop label Awful Records for the sophomore release, which would come to help inspire some of her slightly more amorphous tendencies — Awful label head, Father, features on an Atlanta Millionaires Club side B highlight “Flowers.”


Webster’s sort of a creative polymath, self-directing her own music videos and establishing herself as a go-to photographer for many of Atlanta’s most famous rappers, including Offset, Lil Yachty, Killer Mike, and others. Central to the Faye Webster brand is also her hometown Braves, a very good, exciting baseball team that’s been beating up on everyone this month. She met one of their stars, Ronald Acuña Jr., before a recent home game in which she also sang “Take Me Out to the Ballgame” — already a high-water mark of her fandom and year. Ahead of her Saturday show at Club Cafe, City Paper talked with Webster about her passion for yo-yos, an interesting photo subject, and more.


You’re selling a custom yo-yo on tour, and it seems like a central hobby for you. When did you start collecting and really getting into yo-yos?


FW: I think earlier this year. I just got a yo-yo in my stocking and I started playing with it. My favorite Nintendo character from Earthbound, Ness, he slays with the yo-yo. I was just like, I’m trying to fight people with my yo-yo, and I just started yo-yoing and found this whole yo-yo culture that I didn’t even know existed.


Is it mostly on the internet?


FW: It’s a lot of internet. It’s so small that I think the internet is their main way of making it a community. But there’s like six giant tournaments a year. My friends compete in them. I’m trying to go to one in August.


People seem to usually take interest in the famous rappers you’ve photographed in the past, but I’m wondering about someone else: Backpack Kid, who you shot last year. What was he like as a subject?


FW: Yeah! He is such a weird kid. He is just what you’d think that kid is just by watching his videos. [Atlanta production group] Motion Family are some good friends of mine and he was doing a video with them. They were like, “do you wanna pull up real quick and take Backpack Kid’s picture?” I took this kid’s picture — he barely talked to me, he was so awkward. Then like a month later, he wanted me to star as his lover in a music video. I was like, what no! This dude barely talked to me. I also don’t want to be in a backpack kid video for the rest of my life. But it was insane. I think those are my favorite kind of subjects, where it’s just like “what?”


Do you know how to floss?


I don’t really, I’m trying right now. I’ve never flossed, but I see every frickin' little kid at the Braves jumbotron just flosses their heart out.


This album seems to span across genres and eras in a way unlike many other records in this space. What time period in music history is the most interesting to you?


I think before I was born — music that you’re not involuntarily made to listen to. You can’t go anywhere without hearing “Old Town Road” on any radio or restaurant. I think the music that you have to find and really look for is the best kind of music. When you’re young enough and don’t really know anything about music or how to make a music judgement, that’s when my parents stepped in and were like “listen to what was going on during our time.” I’ve really loved Glen Campbell, I really love Asleep at the Wheel, really timeless stuff that you’re not forced to listen to.


On “Jonny,” you kind of get at the underlying goal of a lot of great breakup-inspired art — that the person will hear it and feel something similar to what you felt. Has any of your music led to meaningful reconnections with old partners or friends?


I think those kind of songs are just a really good form of closure, or something along those lines. I don’t know, it never like solves anything. I definitely share those songs at some point with those people, so maybe it does and I don’t even know it.