Father and son ask Pennsylvanians to "be a friend" and wear a mask, taking inspiration from popular state ad campaign 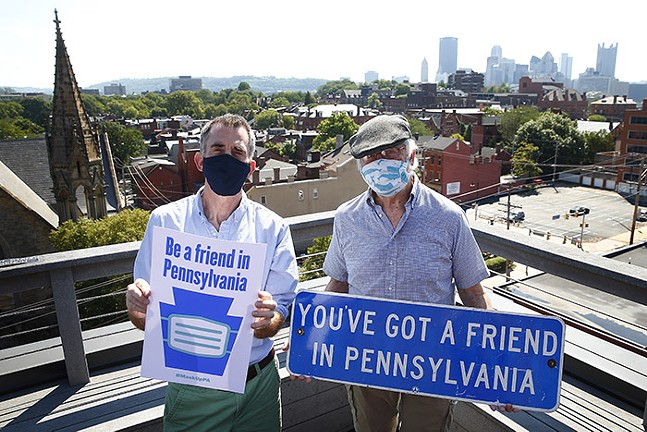 CP Photo: Jared Wickerham
Larkin and Ray Werner pose with the #MaskUpPA poster — and its inspiration, on the North Side.
A well-written ad slogan can make consumers empty their pockets. It can make patrons rush to be the first to see the latest exhibit before even knowing what’s on display. And, if a writer is talented enough — like in the case of Pittsburgh ad men Ray and Larkin Werner — an advertising campaign can pull on heartstrings, creating a sense of familiarity lasting for decades.

It was in the ’80s when Ray Werner came up with one of Pennsylvania’s most well-loved campaign slogans, one that still resonates with people today.

“I remember reading about 20 years ago, they did some research on campaigns for state tourism campaigns,” says Ray, “and the No. 1 most memorable campaign, at that time, anyhow, was, ‘I love New York.’ After that, ‘Virginia is for lovers.’ And the third was, ‘You've got a friend in Pennsylvania.’”

Now, Ray’s own son, Larkin, has given his original slogan a twist into a new heartfelt campaign for public health during the coronavirus pandemic. With his permission, of course.

The ad business runs in the Werner family. Ray, now retired, is reminiscing while sitting in Larkin’s office, where he’s partner and executive creative director of the brand design agency Wall-to-Wall Studios on the North Side. The office, filled with an assortment of quirky signs, awards, and advertising relics, has been mostly untouched since the start of the pandemic, when staff began working from home, making the agency look more like a museum than an office space.

When Ray came up with “You’ve got a friend in Pennsylvania,” he was the creative director at Ketchum Advertising, one of three agencies asked to present a campaign to then Gov. Richard Thornburgh. “Good fellow,” Ray says. (“A Republican!” Larkin smirks.) He says it came to him after leaving the office and stopping for a beer at 11 p.m.

And now, Larkin has launched a self-funded poster campaign using a twist on his pop’s original slogan, hoping to, once again, pull at heartstrings and get Pennsylvanians to stay safe and “be a friend” by wearing a mask during the pandemic.

This summer, Larkin has been posting a series of anti-Trump designs to his social media pages, including ones focused on masks, like silhouettes of President Donald Trump with a mask covering his eyes instead of his mouth. His friend, photographer Larry Rippel, who was aware of Larkin's dad’s original slogan, saw them and reached out, suggesting Larkin turn the slogan into a poster.

“I was dismayed by seeing everyone walking around without masks and thought it would be great to have a poster that would encourage people across PA to wear them,” Larry says.

But Larkin says the original slogan wasn’t quite right for this campaign. “The idea of wearing a mask is really to be a friend,” says Larkin.

“The best design is always when there’s a message behind it,” says Larkin, “and you use design as a force to connect with people and to make that emotional connection.”

Ray and Larry have been photographing folks all over town holding up the posters, including shop owners and Pennsylvania’s second lady, Gisele Fetterman. The 11x17 posters, a mix of light and bright blues on white, are also available as free downloads on hiyinz.com. 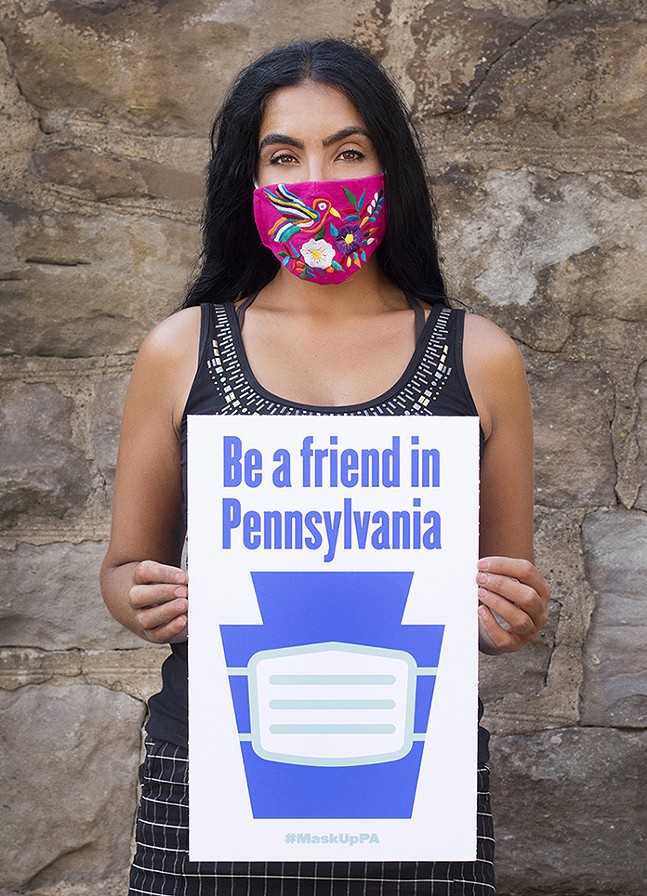 Photo: Larry Rippel
Gisele Fetterman holding a #MaskUpPA poster
It wasn’t hard for Ray to grant permission to his son to use his original slogan because he says something has been missing from other campaigns telling folks to put on masks.

“And what's missing right now in this world is compassion,” Ray says. “So this is a compassionate way, I saw that right away, of saying, ‘Hey how about it? Just wear a mask for a while.’”

In Wall-to-Wall’s studio, even though both men are wearing masks as they speak, it’s not difficult to see this campaign is more than a catchy slogan to them. Compassion is a word they both repeat throughout the conversation, both stressing how much they really do want people to stay safe.

The heartstrings they’re pulling at for this campaign, it turns out, are also their own.

These Allegheny County departments are requiring workers get COVID vaccines