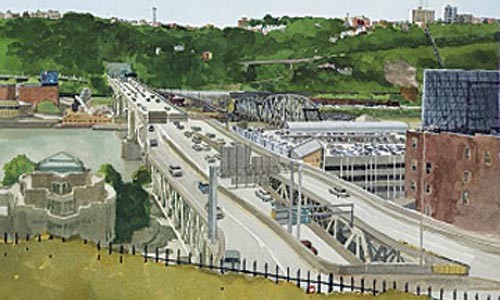 In an era when studio spaces and photographed subject-studies seem to define artistic productivity, it is a rare treat -- particularly in America -- to see the work of someone who paints in the impressionist tradition: en plein air.

The Mendelson Gallery brings together 18 recent works (and seven older favorites) by renowned Pittsburgh watercolorist Robert Bowden, who paints outdoors, from life. Meanwhile, mingling with Robert's meditative cityscapes is a selection of amusing figural sculptures by his son Paul Bowden, who studied classical techniques in Rome for nine years. And despite differences in media and overriding spirit, the works of the artistically traditional father and creatively roguish son have an unexpected harmony.

Robert has published several watercolor collections, including a 2008 compendium of New York cityscapes released by Rizzoli. While the four books deal with well-populated areas -- Manhattan, Martha's Vineyard, Pittsburgh -- it is not so much the inhabitants that interest him. Instead, each area's buildings, bridges and ports take center stage, as in this show's 2009 watercolors "Liberty Bridge from Duquesne University," "Abandoned Farm Building, Falls Village, Connecticut," and "Gehry Apartment Building, Seen from the HiLine, West Side, Manhattan."

As to human subjects, Bowden often merely suggests their existence, leaving them largely featureless if he includes them at all. It is Paul Bowden who delights in the specifics of humanity.

Unlike his father's more serious, contemplative studies, Paul infuses his sculptures with deadpan wit. Paul, whose giant disembodied bronze lion's paws flank the staircase at Penn State's Palmer Museum, seems to find the human body inherently humorous. There is something Beckett-like in each of his pint-sized nudes, which seem more wearily exposed than narcissistically awaiting notice. With these figures, a more philosophical interpretation emerges beside the smile-eliciting anatomical accuracy.

This is especially evident in the gypsum plaster "11-inch Figure," depicting a man standing alone in space, again without a stitch on. Seeing him bare, standing still and looking upward, somewhat vacantly in an otherwise unpopulated and open space, recalls Beckett's observation that, "We are all adrift."

With "Crouching Figure," positioned on a table populated by naked men of various sizes and poses, another striking depiction of the human condition appears: A nude male remains uncomfortably on his haunches while the right side of his face touches the floor. The figure continues to look upward. The pose, simultaneously downtrodden and hopeful, captures the unwittingly comical nature of the human experience.

Often, despite their contrasting spirits, there is a strong dialogue between Paul's works and his father's. This becomes almost literal when seeing Robert's 2009 watercolor "Facing the Carnegie" and Paul's "17-inch Bronze Figure," a male nude that sparkles under the gallery lights. With its face upturned, the figure seems to contemplate the architectural and sculptural wonder of Carnegie Music Hall, its straight lines and beaux-arts design rendered so perfectly in a tricky medium.

Still, there are moments of pleasant dissonance too. Take Paul's gypsum sculpture "Dog" and Robert's 2002 Venetian watercolor, "Church of Santa Maria della Salute." The gypsum work, based on Paul's own pet, features a figure whose canine body sits with its weight on one flank but supported by balled-up human hands. Meanwhile, the head bears a strong resemblance to Charles Baudelaire, and the somewhat startling combination smacks of Sarah Jessica Parker's head-to-Chihuahua graft in Tim Burton's film Mars Attacks!. Visible within the sightlines of Robert's lovely, jewel-toned depiction of a devotional structure, "Dog" becomes an even livelier joke.

And here we see, most clearly, an affable intergenerational tug-of-war. On one side is an elder artist's desire for sublimity and a time-honored representational approach; on the other is his son's affinity for hilarity and progressive concept. Along with the virtuosity of each artist's work, this good-natured artistic tussle is part of what makes the show so delightful.