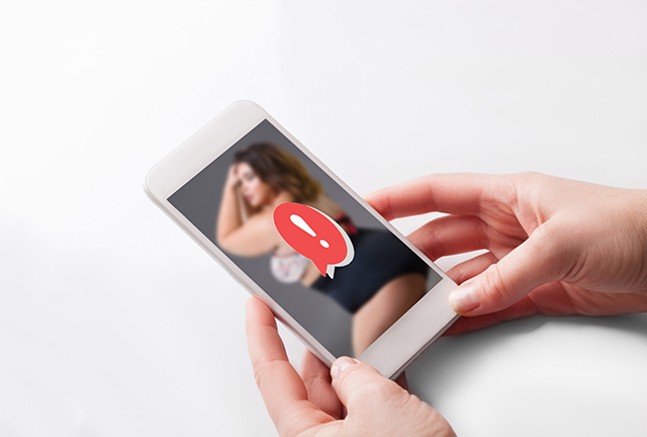 For a time, social media promised to be an open space that would allow for diverse representations of both bodies and ideas — a digital arena where marginalized folks could build platforms, audiences, and communities. Today, however, regulations are tightening across social media platforms, narrowing these possibilities and pushing content creators who do not fall into very specific norms further to the margins. One group being affected is fat people. This week, I asked fat models, activists, and bloggers to share their stories about how increasing regulation on social media — Instagram, in particular — is impacting their lives.

A common problem fat people face on the platform is aggressive over-policing and deletion of their posts. Model Lyla Layne says that she has had several of her pictures deleted from Instagram despite the fact that they didn’t violate any Terms of Service. “No nudity, nothing advertising illegal sex work, just some pretty modest lingerie and some booty,” she says. This is not unique to her.

Fat activist and plus-size fashion model who is going by MLM says, “Myself and so many of my plus size blogger friends have experienced censorship and image deletion while we are following all the terms of service.”

It is not just individual pictures that are being taken down. Plus size model and photographer Carina Shero has had her Instagram account completely deleted seven times and deactivated twice. She says, “On Instagram I would get to 60k and 110k and then they would delete me.”

Even when fat models’ accounts or content are not deleted, they still have concerns that it is being made invisible to other people — a phenomenon sometimes referred to as a “shadowban.” Roxi Adore explains, “My Instagram used to grow at a large rate, usually several thousand new followers a week, but now it’s stagnant.”

It’s not entirely clear what mechanisms are responsible for the increased policing of fat bodies, whether it’s algorithms, real people reviewing posts for the company, or other users reporting posts. Sex worker, model, and artist Ramona Flour points out that the method by which this censorship happens is opaque.

“We can only speculate as to whether it is Instagram itself or user submission because if users see something they don’t like they can report it,” says Flour.

Adore sees these things as connected. “Unfortunately, most of our society doesn't want to see fat people in a positive light," says Adore. "Thus, companies like Facebook/Instagram want to feed their mainstream crowd.”

While the models and influencers are being harmed in very direct ways by having their platforms shut down or pushed to the margins, this has broader implications. When fat bodies are shown in a sensual light, when they are normalized, fat people can more easily accept and love their own bodies. Flour comments, “When I was camming I got so many love letters from couples [who told me] that it is really hard seeing these tiny bodies everywhere.”

“Everything I do is a mission to transform representations of fat bodies,” says Shero.

The internet has created a space where a lot of people have managed to be successful influencers. But as platforms have gotten into the business of increasingly regulating content, one of the consequences is that fat bodies are being overly policed. If Instagram is doing this with the belief that this is what users want, they are mistaken. As Pittsburgh-based plus-size figurative artist Ashley Ramos points out, “Marginalized bodies cannot and will not be erased no matter how hard these platforms try. The demand for representations is greater than any algorithm [that erases them].”

Let's just hope she is right and that we are able to work around these systems before we lose the progress that we have made in terms of positive representations of fat bodies.