Fashion Forward: Stew Frick is NOT UR QUEER 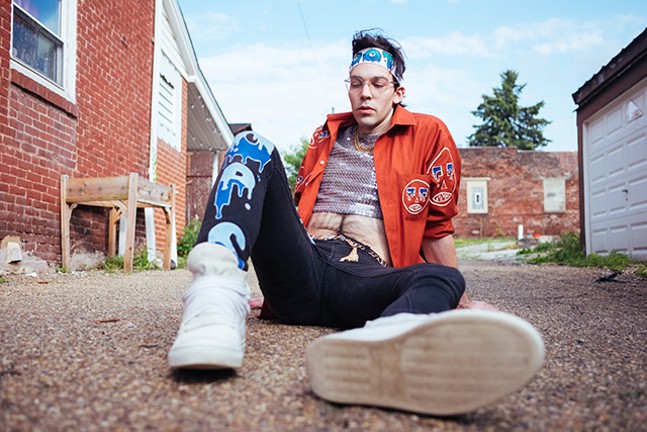 Patched across a brown baseball hat reads the words “NOT UR QUEER” in scratchy font. The item comes from Sweet Tooth Customization, a project by Pittsburgh artist Stew Frick, who specializes in fashion design and clothing.

Frick, who identifies as nonbinary, sees the declaration as a “nice quick, simple expression” of their frustration and anger.

“[NOT UR QUEER] is a really good multi-applicational, general expression of self-power and self-control,” says Frick. “The beauty of it is that you can put it on any other kind of identity you want, just saying that you are not other people’s has its own power in its own way.”

A Pittsburgh native born and raised in Coraopolis and now residing near Wilkinsburg, Frick has been creating art through clothing since 2016 and started their business Sweet Tooth in early 2017. Their customizations range from jackets to button-up shirts to hats. Some works feature floral patterns, prints of the Pittsburgh skyline, or detailed, colorful shapes painted onto the fabric of the clothing.

For Frick, honing their queer identity and introducing it into their artwork was empowering.

“I’m not like a gay cultural icon or anything like that, I don’t know who the contestants are on Ru Paul’s Drag Race, but I definitely enjoy displaying queer words so they can feel like our own,” they said.

Aside from hats, Frick also works with many local musicians to produce merchandise and clothing. Some of their collaborators include Distant Futures, Benji., and Brittney Chantele (Frick designed the jacket worn by Chantele in her recent shoot with Pittsburgh City Paper). They’ve also had their art featured in events at Three Pigs Collective, The Mr. Roboto Project, and The Bushnell.

Frick will also present a solo show in September at BOOM Concepts Gallery for the Unblurred gallery crawl.

For Frick, creating wearable art is not just a business, but a way to fulfill creative intentions aside from their 9-to-5 job at a road and infrastructure company. After spending some time at Indiana University of Pennsylvania, Frick dropped out to pursue artistic endeavors and has found peace, fulfillment, and happiness with their recent accomplishments.

“My favorite thing about making the clothes is the solitude that it brings,” they said. “There’s a lot going on, and in a lot of ways, I’m very happy that painting and designing are not very social activities. I don’t have to hang out with other people to make the things I love. It's something that I will always have and don’t have to depend on anyone else for.”

It hasn’t been an easy road for Frick, between leaving school and trying to make it in the art industry. But with or without sales, making art is still worth it. 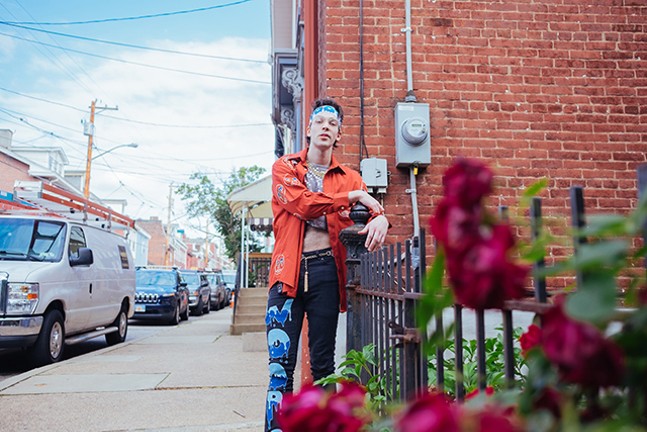 “Even if nobody buys my stuff, and sometimes they don’t, sometimes business isn’t good — when that happens, you can still keep making clothes and wearing them yourself, hanging them up in your room, and it's something that no one can take away from you,” says Frick.

Frick believes that the fashion scene in Pittsburgh is currently lacking, saying that, while are there are plenty of “incredibly creative and talented” local people making and selling clothes, they often get overshadowed by the city’s screen-printing t-shirt businesses. They add that many beautiful alcoves of the Pittsburgh fashion scene also tend to “hide away from the mainstream money and attention.”

Ultimately, Frick says their priority is to amplify and build up the Pittsburgh fashion scene.

“I want to do shows in other cities, I want to collaborate with other artists in Pittsburgh, I definitely want to solidify my name in the fashion world here,” they said. “Really, my large, timeless goal would be to try and organize the fashion scene here and build a market and viewer base so that all of the amazing clothing creators here get the shine that we deserve.”