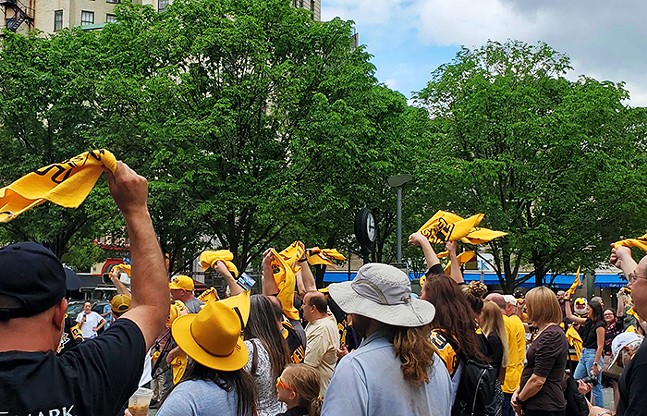 The energy among the small crowd of fans in Downtown Pittsburgh was energetic, with the mayor and county executive leading with the Penguins signature chant, “Let’s go Pens!”

Tonight, the Penguins return to the Stanley Cup Championships for the 2021-22 season, facing the Rangers for game six of the Eastern First Round. This series marks the first time the Pittsburgh Penguins have played the Rangers in the playoffs in six years, so the excitement for fans is high, as the rivalry between the two teams has only grown. The Pens are currently are up 3-2 in the series, and a win would move them to the next round.

Penguins star player Sidney Crosby was ruled out to play for the game against tonight's game with the Rangers, which concerns some fans, but Gainey expressed confidence that the team would still persevere.

CP Photo: Lucy Chen
Pittsburgh Mayor Ed Gainey
“You don’t take our star player and don’t expect us to be pumped,” says Gainey. “We take adversity to our advantage!”

Some fans shared the same positivity for the hockey team and were still excited for tonight's game.

“I think Sid getting knocked out last game, I think they’re gonna want to show everyone they could still win,” says Ken Opipery, a fan at the rally.

F.N.B. Corporation will once again be placing their big screen on the corner of Centre Avenue and Logan Street across from the PPG Arena, where fans who didn’t get tickets for the 7 p.m. game can still cheer on the Penguins outside the arena.