Famed drummer Ginger Baker talks about playing alongside legends, getting older, and his cantankerous reputation

Maybe it's a good day for him, or maybe he's just glad that the questions cover topics other than "Sunshine of Your Love" or "Toad" 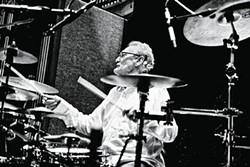 A moment comes near the middle of Beware of Mr. Baker, the sobering 2012 documentary about Ginger Baker, in which the cantankerous drummer lets down his guard. The days of sharing the stage with Eric Clapton, ushering in the term "supergroup" through his time with Cream and Blind Faith, might have raised his profile. But playing side by side with legendary jazz drummers Art Blakey, Max Roach and Elvin Jones, essentially the architects of post-war jazz drumming, "Those are the things that are worth more than all the money in the world," he explains. Then Baker gets teary-eyed.

It's quite a contrast with the film's opening scene, and the one which has contributed to his current reputation. Here, filmmaker Jay Bulger is leaving Baker's South African home, wrapping up several weeks of interviews. He confesses that he's off to interview people from the drummer's past, many of whom aren't on the best terms with Baker. Incensed at the idea, Baker promptly thrashes Bulger on the nose with his walking stick, essentially confirming the description offered by a peer in the movie: Baker is a madman.

In a post-reality-show world, we love to reduce people to basic character traits, with the unsavory ones getting the most attention. No one will ever mistake Baker, who comes to town for this week's Pittsburgh International JazzLive Festival, for a saint. Nor is this an excuse for the attack on Bulger's proboscis. But there's also more to him than a violent outburst and a few years of Cream.

On the phone from England, Baker speaks slowly, but frequently punctuates his thoughts with a gravelly chuckle. Maybe it's a good day for him, or maybe he's just glad that the questions cover topics other than "Sunshine of Your Love" or "Toad."

He groans when the documentary is brought up in a conversation. "I've got mixed feelings about it," he says. "Some of it, like the violent bit in it, was the culmination of putting up with a month of a bloody idiot asking me question after question, deciding to do things that I totally disagreed with. You know, some of it is good, but some of it is not good."

While the film has raised his profile in some ways, he turns self-deprecating when asked if it's helped him secure more gigs. "I think it's probably had the ... opposite effect," he says. "[Promoters are] scared I'm going to beat 'em up."

What has helped him in a positive sense is Why?, his 2014 album with his jazz quartet, now known as Jazz Confusion. The man once known for 16-minute drum solos leaves the bombast behind, preferring to incorporate the influence of African music that he soaked up while hanging out with Fela Kuti. As he locks into a groove with percussionist Abass Dodoo on "Ginger Spice," or lays down different rhythms in a reading of the Miles Davis/Wayne Shorter classic "Footprints," there is a temptation to think that Baker has gotten into something new.

But Baker started with jazz music. Mentored by English drummer Phil Seaman, Baker eventually joined the Graham Bond Organization, which included bassist Jack Bruce, a man with whom he would have a contentious and artistically productive relationship, when they played together in Cream.

The brief lifespan of that trio put him on the musical map, but Baker refuses to break his career down into his rock years, blues years or jazz years. Regardless of the setting, "I don't consciously play different," he says. "I just play to what I hear. I listen. That's what it's about."

When talking about his encounters with American jazz drummers Blakey and Jones, Baker emphatically calls the performances drum duets, rather than showboating examples of drum battles. "That's a load of crap — drum battles. It's nonsense. ‘I can play faster than you. I can do it.' What's that got to do with playing the drums?"

He and Blakey were the first to meet, at a festival in the early '70s. "Both our kits were there. And some bright spark came up with the idea that we [play together]. No rehearsal, nothing. It ended up as the most fantastic duet. We both hit the same pattern at the same time and from that point on, it just went crazy," he says with a hearty laugh.

Elvin Jones, who had played with John Coltrane, initially made disparaging remarks in an interview about Baker's style. After playing with him, he changed his mind. "Elvin was a really good friend of mine from that time on," he says. "And Max too, you know. I really got on with them all. They accepted me on the same plane."

At 75, Baker's years of hard living have started to catch up with him, but the music overrides his limitations. "I don't think about it when I'm playing. Afterwards ...," he trails off before laughing, casually. "I'm pretty old now. And I've got lots of physical ... ah, problems. But when I'm playing, I enjoy it. I get pretty exhausted at the end of a gig, you know."

He confesses as the interview concludes that he's not a very talkative person. But his mind is still sharp, and when asked for a final thought for Pittsburgh, he quips, "Tell people, I promise not to hit them, all right?"