It's fun to perch on things 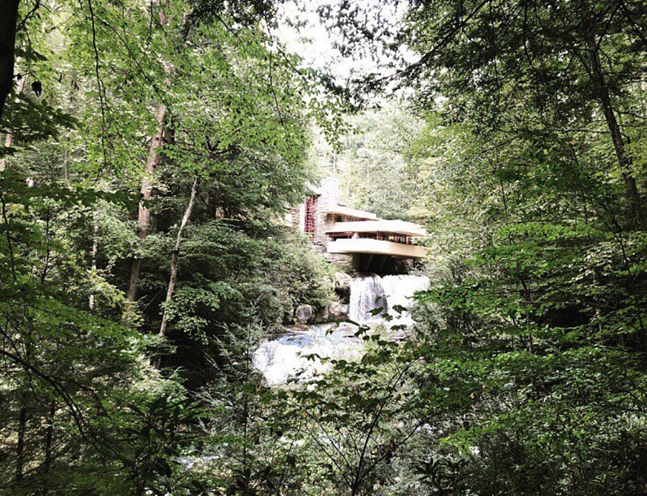 There are many good reasons to visit Fallingwater, but the only one that matters is that it makes you feel like a kid.

Built by Frank Lloyd Wright for department store mogul Edgar J. Kaufmann in the 1930s, the house has a surreal vibe that invites academic explanations, but really, it just looks like an elaborate treehouse built by a very intelligent, well-funded child.

Beyond the ingenuity required to design a house around/in/on flowing water, the building is carved with an abundance of odd corners and nooks that make you want to play hide-and-seek. Walking the perimeter opens up angles and details that somehow refute what you saw from the other side. Every aspect of the house feels like an argument for the benefits of perching. The first time I saw it, I sputtered to my dad, "It's fun to perch on shit, huh?" It really is.

It took less than five years to build Fallingwater (if you check in with the "history" page on the website, they credit the landscape with the collision of tectonic plates 300 million years ago, but no one has time for that). The Kaufmanns commissioned Wright to build the house with the intention of being able to see the falls, but the architect went all in and put the house right on top of them. It's easy to get used to that fact, but visiting Fallingwater really drives the point home. It's an insane idea.

If you take the tour, you'll learn about how Wright worked to integrate the design with its environment by relying on materials and colors that half complemented/half clashed with its natural surroundings. There are a lot of earth tones and the building looks like it's trying not to bother the neighboring trees, but there's also something futuristic and indulgent in all the showiness and harsh right angles. The shelves of the balconies look like they could fold into the building and go incognito in the presence of an unwelcome visitor. Once again, it feels like a kid built it.

Whether you're a lifelong Pittsburgher, a transplant, or a tourist, it is worth the 70 minute-drive to visit Fallingwater. I lived here for 13 years before my first visit and have been kicking myself retroactively ever since. Don't be like me. Take the tour, eat at the cafe (they have a pretty killer lunch menu and a Fallingwater chocolate bar), explore the trails, ask questions, marvel at the weirdness of the whole thing. Make a day of it.