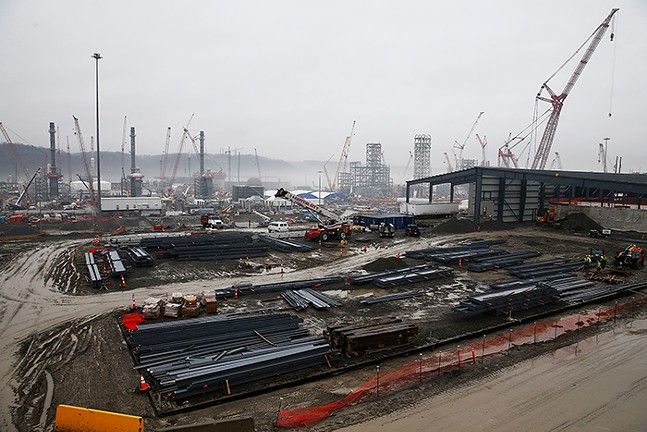 CP photo: Jared Wickerham
The Falcon Pipeline will provide ethane to Shell's cracker in Beaver County, seen here
Last year, a natural gas pipeline being constructed through Southwestern Pennsylvania garnered the attention of Pennsylvania’s Department of Environmental Protection, who then notified federal agencies in charge of regulating pipelines and other environmental concerns.

In a February 2020 letter to the federal Pipeline and Hazardous Materials Safety Administration, Pa. Department of Environmental Protection Secretary Patrick McDonnell wrote that issues “pose a possible threat of product release, landslide, or even explosion.” According to the Pittsburgh Post-Gazette, McDonnell mentioned witnesses with “first-hand knowledge of bad corrosion coatings, falsification of records and reports, retaliatory firings and other actions by Shell,” who owns the Falcon Pipeline.

This led PHMSA to conduct an investigation into the pipeline, which is currently ongoing.

The investigation is focused on possible noncompliance of public safety requirements during construction of the pipeline and an alleged cover up of incidents that could put the public at risk, according to the FracTracker Alliance, an advocacy organization that obtained documents in connection to the investigation. FracTracker Alliance is particularly concerned with allegations of corrosion of the Falcon Pipelines, as corrosion failure is the second leading cause of incidents occurring on pipelines.

“Residents of the Ohio River Valley know too well the serious and life-threatening impacts that have come from rushed pipeline construction in the wake of the fracking buildout,” says Erica Jackson of FracTracker Alliance in a press release. “We hope that regulators will take all necessary action to protect public welfare and bring justice for workers who may have been unfairly terminated.”

A spokesperson for Shell confirmed to the Post-Gazette that federal officials conducted audits of the Falcon Pipeline and said PHMSA officials “found no issues with installed coatings.” Shell said it also completed inspection of all the welds as an effort to prevent corrosion, and installed more emergency shutoff valves than necessary and buried the pipeline deeper than and used a thicker pipe than federally mandated.

“We believe we have demonstrated an unwavering commitment to safe construction and operations through the robust design and installation of the Falcon Pipeline,” Shell told the Post-Gazette.

Natural gas pipelines and other fracking-related infrastructure have come under intense scrutiny from health advocates, environmental groups, and progressive lawmakers. Environmentalists are concerned pipelines and fracking wells are leaking copious amounts of methane, a powerful greenhouse gas. Health advocates cite studies and investigations that living near natural gas infrastructure is leading to toxins and emissions levels well above national averages inside residents’ bodies. In 2018, the Revolution Pipeline — a separate pipeline in Beaver County — exploded. The incident was likely caused by a landslide and resulted in a fire that destroyed a home, a barn, and several cars, and prompted an evacuation.

FracTracker Alliance says that 29 groups are calling on Pennsylvania and federal agencies to increase investigative efforts into Shell and the Falcon Pipeline, and is asking for work on the pipeline to be halted until it can be proven that this pipeline will not threaten public safety.

One of those groups is Beaver County Marcellus Awareness Community, a grassroots advocacy group focused on informing Beaver County residents about natural gas development. A statement from BCMAC reads: “These documented problems with construction of the Falcon Pipeline pose serious threats to public safety, workers, and critical natural resources. Given the fragile geological bedrock in our area and the fact that the Falcon will transport hazardous liquids, defective pipeline corrosion coating could lead to disastrous outcomes. A thorough investigation should take place.“