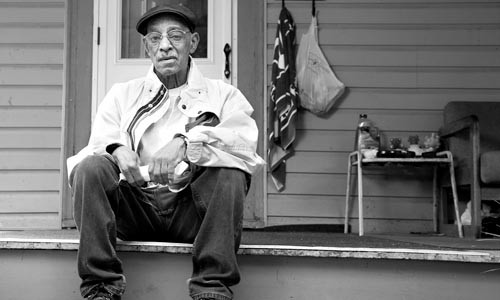 Brian Kaldorf
Fairywood's John Wilson blames the state of his neighborhood on politicians.

On a Sunday afternoon in the west Pittsburgh community of Fairywood, an ice-cream truck takes a slow right onto Fairywood Street, trawling for customers in a neighborhood dotted with empty houses. An electric-piano remix of Beethoven's "Für Elise" blares from the truck's megaphone, interrupted periodically by what sounds like the theme from Fresh Prince of Bel-Air.

But Billy's Ice Cream seems like the only enterprise making an investment in Fairywood lately. And residents -- many of whom sit on their porches, barbecuing and talking -- resent it.

If it weren't for bad news, residents lament, their neighborhood would get no media attention at all. As a result, many outsiders either think Fairywood is dangerous, or never give it a thought.

Fairywood has made local headlines twice in recent months: on April 6, when Luis Morales, injured and bleeding, opened fire on two Pittsburgh police officers; and on May 18, when three robbers invaded the home of resident Glidie Cobbs and shot him to death.

"All you hear [in the media] are 'shots, shots, shots, kill, kill,'" says 62-year-old Jean Lee, who has lived in the neighborhood for 36 years. But even most of the criminals have left. "Now it's people coming from other areas doing their dirt here and then going back to where they live. And we get the bad rap."

Kevin Stevwing, the crime-prevention officer for the Police Bureau's Zone 6, agrees that Fairywood has been unfairly pigeonholed. It's one of those neighborhoods where the mere mention of its name makes "people automatically think of violence or shootings," he says.

Only 10 of the city's 90 neighborhoods had fewer violent crimes in 2007, according to a city-wide Annual Crime Report released by Pittsburgh police. Partly, that's because Fairywood has so few people to begin with -- just 1,100 residents. But Stevwing also credits the community for its efforts to curb violence in recent years.

Yet Fairywood's bad reputation lingers, Stevwing says, partly because of "past actions" associated with two public-housing developments: Broadhead Manor and Westgate Village. Both facilities are now defunct -- but so far, that's just meant there are even fewer people around.

Fairywood's population today is just one-quarter of the 4,491 people counted by the U.S. Census in 1950. According to the most recent Census, its current population is 90 percent black, and the poverty rate is 55 percent.

And those residents live in geographic isolation. Strung between Crafton and Ingram, and situated farther west than any other point in Pittsburgh, Fairywood boasts few reasons for people to see it firsthand unless they live there. Despite having more acreage than the South Side Flats, it consists of only nine streets, and there are no signs welcoming visitors or distinguishing it from surrounding communities.

The dwindling population, coupled with rising crime, accelerated Fairywood's painfully slow devolution into a ghost town. The landscape there today reflects the exodus of people and business that has characterized Fairywood's recent history.

Even for residents, the neighborhood offers little except the remnants of its past: an abandoned market and Laundromat; a dilapidated shopping center; a defunct school; an empty swimming pool; and plenty of vacant buildings and overgrown lots. Census figures show that 40 percent of its housing stock is unoccupied.

Fairywood does have some business activity. UPS has a shipping facility in the area, and the OK Grocery chain has a warehouse. But as far as neighborhood services go, about all residents have is the Westside Salvation Army building.

It has become the community's town center, a place to pick up free food and find help with paying bills and mortgages. Residents also bring their children for after-school activities and can even attend weekly church services.

"The Salvation Army is sort of like the lifeline within this community. This is about the brightest thing they have going down [here]," says Capt. Earnest Fullwood, who runs the Salvo. "Otherwise, a lot of people would go hungry, and a lot of the grandkids they're raising would go hungry."

But even as it is, the community "is going down to nothing," says resident Jean Lee. "There's seven houses in one little plot that was across the street. They're gone, the houses boarded up." And for neighborhood kids, "There's nothing out here."

"It's a shame, because they are good, hard-working people and families that grew up down there," says Dawn Dugger, head of the Fairywood Citizens Council. "And we never [get] things just as the rest of the city does, or any other community."

Dugger was a lifelong resident but had to move in 2004, when storms from Hurricane Ivan flooded her apartment in Broadhead Manor. Dugger says she got no response from the Housing Authority or the police -- a claim backed up by residents who watched the complex get flooded. Dugger says she decided to abandon her home when water began pouring into her refrigerator. She currently lives in neighboring Crafton.

"It just seems like [Fairywood] has always had the reputation of being neglected, that nobody cares about that small corner of the city," Dugger says.

"I blame everything on the politicians," says John Wilson, 78, while spending his Sunday afternoon grilling ribs and hot sausage. "Councilperson, mayor -- these things go through them. They just don't care."

In 2007, Fairywood and other West End neighborhoods secured federal "Weed and Seed" money to combat crime and drug activities. But that same year, the city excluded Fairywood from a tax-break program designed to attract home-builders to struggling neighborhoods.

The mayor's office did not return repeated phone calls and e-mails about that decision: At the time, its City Planning department explained that neighborhoods were deemed eligible for the program based on high housing vacancy, population decreases and low income levels. Those are about the only things Fairywood does have, and the program has benefited other distressed areas like Homewood, Uptown and the West End, one of Fairywood's neighbors.

"Fairywood is definitely on my radar, and they definitely need my help," says Pittsburgh City Councilor Theresa Smith. "I know the people, and I don't want to let them down."

Smith acknowledges that city officials have not dedicated enough time or resources to the community.

Since taking office this year, Smith has made a few trips to Fairywood. She helped organize a May 11 meeting in which residents met with representatives from the Urban Redevelopment Authority (URA), the city's Housing Authority, police and parks officials. The crowd of 20 or so residents pressed officials on the prospect of obtaining new recreational amenities -- including a community center, as well as water for the empty swimming pool off Broadhead Fording Road -- and the city's role in maintaining vacant land that is slowly returning to wilderness. One resident described the neighborhood as a "city with a lot of country in it," referring to its population of snakes, raccoons, wild turkeys and even deer.

When development does come, residents are often wary of it. At the May 11 meeting, residents expressed concerns that more industries like OK Grocery and UPS might be lured in by the neighborhood's proximity to major trucking routes PA-60 and I-279. And because the city still owns the mammoth parcel where Broadhead Manor used to be, some residents fear it will slowly buy other vacant lots in the neighborhood, sell all of it and turn Fairywood into nothing more than an industrial hub.

"I think they're waiting for these houses to burn down, fall down or whatever, or someone to get so disgusted they get up and leave their house," says Lee, while smoking a cigarette. "Slowly but surely move everybody out and make money off of this."

Many residents hail the development as a sign that someone, at least, acknowledges the community's existence. But others see the symbolic gate -- guarded by a "courtesy security patrol" -- as yet more evidence that Fairywood's longtime residents have been written off.

Smith says she has tried to secure funding for a community recreation center. As of now, there are no official plans for any city-backed development in the community. Neither Pittsburgh Partnership for Neighborhood Development -- which assists community-development corporations in East Liberty, the Hill District and Bloomfield/Garfield -- nor the URA have any projects currently operating in Fairywood.

"I want to give Theresa a little time to get her feet wet," says John Wilson, who has lived in Fairywood since the 1950s. He lauds her for having "been in our community several times, and she knows what the problem is down here. [But] we don't have the numbers. When [elected officials] see you don't have the votes, they turn their back on you."

"It's a very small community, and it's like each piece that you lose, you're just a step closer to losing almost all of it," Dugger agrees. "It feels like you're hitting your head against the wall."