Plamegate is now an entertaining movie

Doug Liman's Fair Game revisits the real-life Beltway spy thriller-cum-soap opera known as "Plamegate," in which the identity of CIA agent Valerie Plame was leaked by the Bush administration, reputedly in retaliation for a critical op-ed piece written by her husband, Joe Wilson.

To recap: Plame (Naomi Watts) is a longtime CIA agent, working undercover in various countries in counter-proliferation. In 2002, Wilson (Sean Penn), a former diplomat, visits Niger to investigate reports that the African nation is selling huge amounts of yellowcake uranium to Iraq. No way, says Wilson. But the Bush administration, looking to justify invading Iraq, says yes, even citing the sale in the 2003 State of the Union speech. Wilson takes the administration to task in the New York Times. Plame is outed, precipitating a tornado of ill will, counter-charges and wrecked careers among various government agencies and news organizations.

Fair Game is adapted from memoirs written by Plame and Wilson, so understandably the film is sympathetic to the couple. Nonetheless, compressed into 108 minutes and cogently laid out by handsome stars, this is a pretty gripping tale: You have to keep reminding yourself it's real (or, at least, mostly real), even if it plays out like a petty sandbox fight between extremely powerful people.

I enjoy a well-paced geo-political thriller, so I was mostly content, even though I already knew the whole story. I even excused the clumsy scenes that smacked of only-in-a-movie. I marveled at how well Watts resembled Plame, and how the whippet-like Penn worked overtime to assume Wilson's shlubby physique.

Slightly harder to shake was the sheen of sanctimony that overlay everything. This is undoubtedly the byproduct of the film's sources: While we see only the briefest scenes from the other side's perspective (mostly in the form of the ferrety Scooter Libby), there are plenty of dutiful-parents moments chez Plame-Wilson. Also, due to the clandestine nature of Plame's job, one wonders what's not being told, or has been re-scripted. Since Plamegate was riven  with partisan politics, self-interested players and individuals schooled in the Dark Arts, exacting the full-bodied truth may never be possible.

Suffice to say, Plame and Wilson get the last word, as well as attractive A-list avatars to portray them as true-blue, if stressed, exotic bureaucrats. Viewers -- or at least those willing to wade back into the Iraq-o-mess -- get a pretty good slice of genre spydom, where, of course, the hero is vindicated. In English, and some Arabic, with subtitles. Starts Fri., Nov. 19. 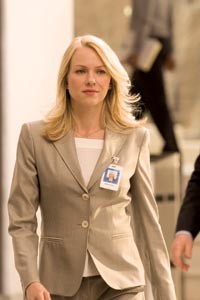 Taking on the system: Naomi Watts, in Fair Game