The haunting emblematic music of Portugal – fado – is explored and celebrated 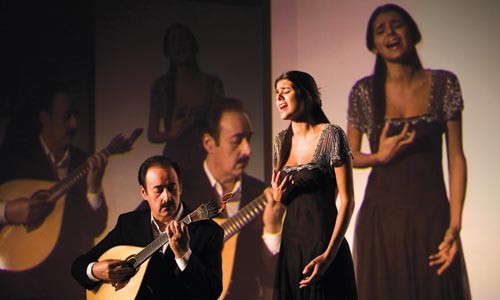 Carlos Saura's colorful, stylized film completes the Spanish filmmaker's trilogy highlighting the dance and music of Iberia. Fado has its roots in the folk music of the early 19th century; its songs are laments, heavy with longing, nostalgia and reflective sadness. As depicted in the film, the songs are often accompanied with spare instrumentation, such as guitars (specifically the slightly bulbous Portuguese guitar). Yet, the genre lends itself to a variety of interpretations, influences and instruments, as well as hybrid forms that incorporate hip hop or the percussive rhythms of Africa and Brazil (where Portugal had colonies). Most of the fados in the film are paired with dance interpretations. Saura shoots the performances on studio sets, and employs several recurring techniques and motifs to create mood or mini-narratives. Video (including archival footage of famed faudistos) is projected behind performers, and many sets feature reflective surfaces, silhouettes, lush colors and artificial light that recalls the golden tones of the late-day sun. It's a beautiful, vibrant film, but it is, in essence, a collection of high-caliber music videos, and not a documentary. Thus, while I appreciated the performances, I found the film somewhat frustrating. If you're already a fan of the music -- or open to discovering new genres of "world music" -- you'll likely be thrilled by this film's variety of fados and Saura's gorgeous visual interpretations. In Portuguese, with subtitles. Starts Fri., April 10. Harris