Photo by Renee Rosensteel
In this cutthroat political season, it's important to make sure that our candidates are giving us the straight story. So City Paper is working on fact-checking Donald Trump's  Wednesday night speech. In this first installment we take a look at Trump's claims about former Penn State Coach Joe Paterno.

Trump's Statement: "How's Joe Paterno? Are we going to bring that back?" said Trump. "How about that whole deal." This obviously a huge concern for Trump who is a big fan of the coach and did at least know when Paterno was fired and was very upset.


Joe Paterno's family should sue the idiots @PennState that made that ridiculous deal--and commissioned the one sided report.

Investigation: The rule of any seasoned fact checker is to go to the best sources. So, according to Wikipedia, Paterno, "sometimes referred to as 'JoePa' ... died of complications from lung cancer on January 22, 2012, only two months after his firing."

A quick search on "The Google" turned up this:

Also, the New York Times reported in 2012 that Paterno had died. And this search also debunked any rumors that Lynn Swann was still a Steelers wide receiver (upper left): 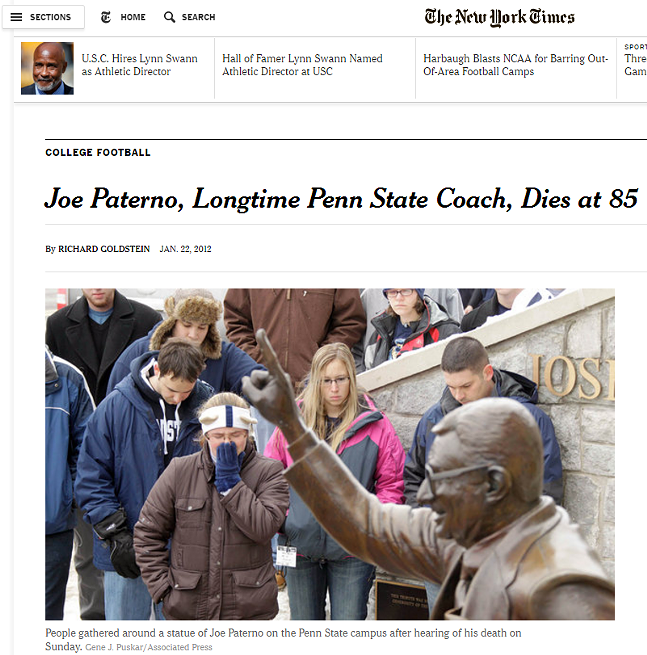 And finally, we uncovered this photographic evidence of Paterno wearing a halo. As we all know, Jesus doesn't hand these out to the living.

Conclusion: After our extensive investigation, City Paper can only come to two conclusions:

2. Donald Trump is probably an idiot

Editor's Note: Trump's campaign says he was talking about the Paterno statue removal from school property. Check out Ashley Murray's video and decide for yourself.