The knowledge that neoliberalism makes economic insecurity indivisible from motherhood today is central to Mothering Through Precarity. 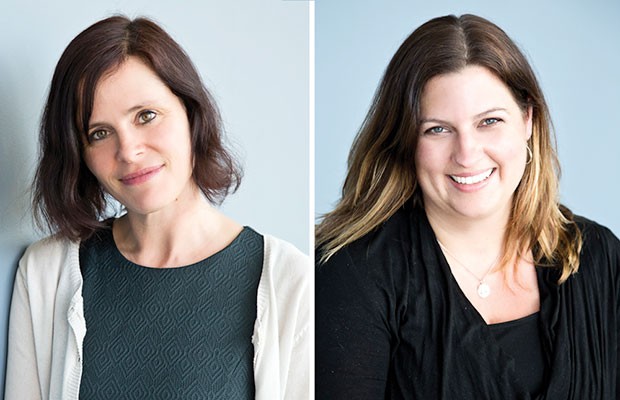 Julie A. Wilson (left) and Emily Chivers Yochim, authors of Mothering Through Precarity
Nancy always wanted a baby. And it was important for her to do things the “right way.” So, Nancy went to school, and got a job. Then she met a man, they got married, and Nancy had a baby boy.

At first, Nancy envisioned doing what her own mother did, staying home while her kids were young. Nancy hated the idea of day care, but quitting work wasn’t an option financially. So, Nancy changed her mind about day care. Now she appreciates visiting her son during her lunch breaks. The thing is, Nancy had ideas about what kind of mother she would be, centered on her confidence that she would be home. She knew all about sleep training, and planned on being strict. Now she feels guilty. “If I was home during the day it wouldn’t bother me,” she says. “But I’m gone all day, and he’s with someone else ... this is our only time.”

But Nancy knows she’s lucky, so she doesn’t dwell on how her life differs from the life she wanted and expected. “Some days I’m like, ‘Oh, this isn’t so bad. We’ve got it.’ ... [T]hen other days I’m like, ‘I cannot do this ... We’re falling apart ... We don’t have clean clothes.’ So it’s kind of a day-to-day up-and-down kind of thing. But it’s overall working pretty well.” Nancy says this last part through tears. Her husband, Jeff, is expecting a layoff.

Nancy is one of many Christian, working-class, Rust Belt mothers interviewed by Allegheny College professors Julie A. Wilson and Emily Chivers Yochim in their new book, Mothering Through Precarity: Women’s Work and Digital Media (Duke University Press). Despite its leaden title, women, with children or without, have a lot to gain from this smart, insightful work. It outlines a nagging problem so specific I lacked a clear definition of it before I started reading.

Nancy, and many American women, including myself, simultaneously harbor a conscious desire for a family, and a somewhat unconscious, all-American desire for an autonomous family. Bob Dole once famously said that it doesn’t take a village to raise a child, it takes a family to raise a child. It’s an idea rooted directly in our dominant political ideology, one that many cannot name: neoliberalism.

“[Neoliberalism] says the private market can do everything better than any state or public infrastructure can,” Wilson says, on a recent video call with Yochim. (Both are professors of communication arts and theater.) “It grew out of a reaction to the New Deal [and] came to prominence with [President Ronald] Reagan. All of our administrations since Reagan have been very neoliberal, [both] Republican and Democrat. ... They are about steering the nation towards global competition and the markets, versus the older idea that the state should be there to provide basic safety nets that were public. We’re supposed to take more and more personal responsibility for ourselves, regardless of what’s going on with us, in order to compete in the market.”

Like Nancy, my own mother stayed home while I was small, and like Nancy, I have some desire to do the same. However, I have long been acutely aware that the numbers don’t add up. Taking on the cost of raising a child ($233,610, not counting college, according to a 2017 CNN Money article) seems irresponsible without a plan for how I’ll make that money over the next 17 years.

The knowledge that neoliberalism makes economic insecurity indivisible from motherhood today is central to the book. After Nancy’s husband, Jeff, loses his job, for instance, it adds an immense amount of pressure to her family. But many mothers in the book recoil instinctively from the idea of public assistance. “We’re all subject to the general precariousness of life itself,” Wilson says. “What neoliberalism does is subject everyone to precarity in a structural sense, because it says you’re responsible for yourself, you have to manage risks, you have to take personal responsibility for the conditions of your life. That no one’s gonna be here for you.”

To gain security in a world where mothers’ labor is unpaid, but paid labor and participation in the market are a financial and moral imperative, many mothers enter the “mamasphere,” finding important financial and emotional support online. This finding surprised the authors. “We expected to hear more about television shows,” Wilson tells me. “It really became more about how the internet undergirds their lives, which are overloaded because of economic insecurity.”

“We were trying to think about [how] media and mother’s labor is working together,” Yochim adds. “Pushing beyond the mommy-wars stuff you hear … like working moms versus stay-at-home moms.” Those ideas are mostly disingenuous, and support the neoliberal agenda of family life being a private sphere. I, for one, am glad to know that online at least, there’s a village.