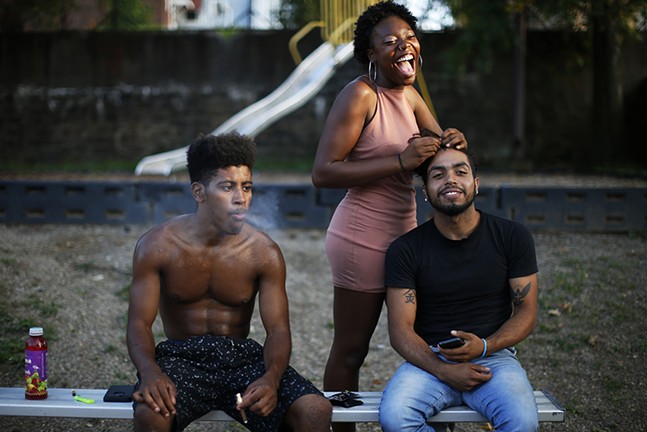 CP photo: Jared Wickerham
Keara Jordan does the hair of Angel Rodriguez while friends look on and play basketball at Sullivan Playground.

If your experiences in Homestead don't extend much farther than the shopping centers of the Waterfront, it's time to expand your horizons and embrace all that this historic neighborhood has to offer.

Beyond the Homestead Grays Bridge is a tight-knit community, many of whose members have been living there their entire lives. The same goes for the establishments. Tucked in the hills, just barely qualifying as Munhall, lies Pearl’s — a neighborhood watering hole for everyone — morning, afternoon, and night. Photographs of Pittsburgh, old and new, line the walls of the bar that has been in the area since 1971. Nelenna Hines, a resident of Homestead, considers it a staple. She would know: She's worked there for 10 years. To Hines, it’s a place where everyone can come together.

“I would raise my daughter here. It’s my home.”

William McDonald, or “Uncle Bill,” agrees that the neighborly atmosphere of Pearl’s represents the tight-knit community of Homestead. “Everyone here knows each other. There are good people here.”

Down the hill from Pearl’s, sitting on Eighth Avenue directly across from the Homestead Grays Bridge, is another family-owned staple. Duke’s Upper Deck Cafe is a restaurant and bar that has as many locally brewed beers as it does “out-of-town stuff,” as the owner, Joe Ducar, frames it.

The restaurant has been in Ducar’s family since 1988, and now it's home to neighboring storefront owners on 8th Ave., like Screaming Crow Tattoo and Piercing. “Brett comes in, he works the tattoo shop down the street ... this is like his office ... everyone from Screaming Crow comes in and meets their clients,” said Ducar. Duke’s also has an outdoor patio with a view of the Waterfront.

And then there’s Rainbow Kitchen, located on East Ninth Avenue, right in Duke’s backyard. Founded in 1984, Rainbow Kitchen was created to provide food and support for low-income families when the steel mills closed. “It was kind of a grassroots thing, people got together ... collected clothing and hot meals ... we’ve evolved over time to meet the needs of the people in the community,” says Donna Little, Director of Rainbow Kitchen Community Services.

“You grow up sometimes and you have no idea … I was not aware of how different some people’s lives were than mine.” So, she started working at the food bank, before eventually moving to the assistant director position at Rainbow Kitchen. “Before this, I never kept any job for more than four or five years, and I’ve been here now since ‘99.” The program serves six different communities, including Homestead, Whitaker, West Homestead, Munhall, West Mifflin, and Duquesne. While food assistance is at the crux of what Rainbow Kitchen does for the community, they also have a case management program.

“People come here for a lot of reasons ... people have problems, it could be anything ... any kind of problem that a person who is not making enough money can face. People come to us and let us know what they need,” says Little. Rainbow Kitchen now serves approximately 80 people a day, with two in-house pantries, the Kids' Cafe, and a morning meal Monday through Friday. They also serve food to the doorstep of low-income apartment buildings in the Homestead area.

“We do a lot of collaborations with other organizations. We have people coming in for food, we have people coming in on a regular basis to all of the food programs to share information or to get people signed up if they need it for supplemental health insurance...veteran’s things, drug and alcohol problems, financial management,” says Little. “Our goal is just to help improve the quality of life for low-income people here in the Homestead area, and just the larger community around us.”

Rainbow Kitchen does a coat distribution drive every year, and they are currently accepting new and gently used coats or any form of winter wear for donations. According to Little, Rainbow Kitchen has served over one thousand people every year with the coat drive alone. Donations can be made to Rainbow Kitchen between now through the end of the third week of October.

Little said it best: “This community has a lot of deep roots.” Homestead represents Pittsburgh in that way – its people may come and go, but a good portion of them come back. The Homestead community has built itself up from a steel mill borough to a growing town to hang in which to hang out. Its people are developing new businesses to draw you in while still cultivating the older establishments, maintaining and remembering its roots.


Best described as “a community center with a library in it,” said Carol Shrieve, Director of Administration. Along with the full library comes the beautiful music hall that showcases national touring acts year-round. It is complete with a gym, batting cages, and a swimming pool.

An aesthetic, local brewery with seasonal and year-round beer selections. Prepare yourself for the floor-to-ceiling artwork. They have garage doors and yes, they have games.

Ace is a BYOB axe throwing facility in a renovated old bank directly on East Eighth Avenue. It’s a larger version of darts, or so they say. The owner, Joe Deasy, said Ace brings in about 40,000 people every year between Axe Throwing and ...

Located beneath and under the same management as Ace Axe Throwing is Escape Room Pittsburgh, complete with five different games, or rooms, to enjoy. The facility is handicap-accessible, and they designed every room they have from scratch - which they are proud of it.