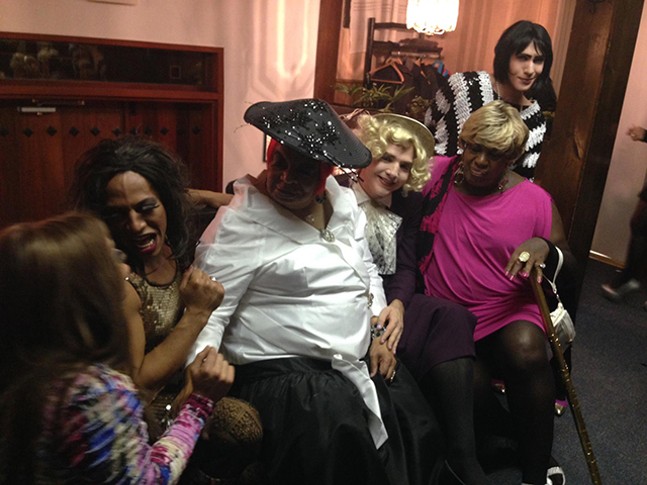 Pittsburgh Queer History Project has a great website. The items in its archive, ranging from drag posters to t-shirts from 30 years of queer culture in Pittsburgh, are meticulously organized and easy to engage with. But it's missing something. There are certain aspects of the materials that get lost when viewed on a screen — the smell and crunch of old paper, the woozy look of 30-year-old videotape. To really connect with the power of the project, you need to go analog.

Earlier this month, the project's founder, Harrison Apple, did just that with the release of a new print magazine called PQHP Magazine. It highlights items from the archives, but goes far beyond that. There's a page dedicated to videos of drag performances, organized like coupons in a Pennysaver, which can be activated and viewed on your phone through a QR code. There's an architectural rendering of the defunct Downtown gay bar Pegasus, complete with paper dolls that can be cut out and used to act out a "Pegasus fantasy." There's also a coloring book.

Apple wanted the magazine to be something readers would "play with without having to be burdened by the archival environment."

"The magazine — and I think this stands for what we think about the project in general — it's about pleasure and tactility," says Apple.

PQHP was founded by Apple in 2012 while they were a student at Carnegie Mellon University, as "an oral history and media archive, focusing on LGBT nightlife in Pittsburgh, Pa., from 1960 to 1990." The idea came when Apple was helping VIA co-founder Lauren Goshinski clean up the space at 6119 Penn Avenue in preparation for its reopening. They discovered a treasure trove of items left behind from the space's past life as an afterhours queer bar. This led them to dig into Pittsburgh's queer history and search for more materials, which was difficult since so many of the stories took place in underground, off the grid clubs (Apple points out that there was a state police raid of an East Liberty gay bar as recently as 1988).

Their collection was shown at Future Tenant Gallery in 2014 with the exhibit Lucky After Dark, named for gay club owner Robert "Lucky" Johns. The exhibit was only up for a month, but Apple — along with PQHP co-director and CMU professor Tim Haggerty, and archivist Dani Stutchel — kept the project going. The website was launched both as an archive of its collections and as a resource for people who wanted to submit items of their own. As of this month, Apple estimates that they've "received, collected, and created tens of thousands of items both physical and digital over the past six years."

In addition to the website, PQHP published a print catalogue for Lucky After Dark to keep the collection accessible after its closing. So Apple already had the skills, experience, and motivation to do another print product when the opportunity arose in the fall of 2018.

After being awarded a Lift Grant from the Greater Pittsburgh Arts Council, Jimmy Riordan and Nina Friedman approached Apple and PQHP to collaborate on a Risograph print version of the project. In addition to highlighting PQHP's archives, Apple saw the magazine as an opportunity to have fun with the collection and celebrate the lives it highlights in a fun way.

"It should be something that you’re not too precious with, which is why you cut it up to make paper dolls or color in it, or take out one piece and throw the rest, or use it for a litter box," says Apple. "I don’t care. The point is that you pick it up and maybe those videos get to do something again."

As of May 28, there were 150 requests and 200 copies had been mailed all over the country. Copies of the magazine have been distributed all over the city and you can request one through a Google form linked on PQHP's Facebook page, or see some of the collection in person during People's Pride. You can also request to submit your own items at pittsburghqueerhistory.com.