Among the past century's major film artists, Kenneth Anger surely has one of the strangest relationships with Hollywood. He grew up in Beverly Hills, took childhood dance classes with Shirley Temple, watched at least as many classic-Hollywood movies as any other kid born in 1927, and has long claimed to have appeared in the famed 1935 film A Midsummer Night's Dream.

The last is a résumé item some dispute. What's beyond contention is that Anger (born Kenneth Wilbur Anglemyer) rejected the Hollywood aesthetic to become a leading avant-garde filmmaker ... whose visionary work helped remake Hollywood style in his own image. And then there's Hollywood Babylon, his infamous book (later sequelled) of scandalous gossip about Tinseltown's golden age.

Anger also has a relationship -- somewhat less strange -- with Pittsburgh. In the 1970s, drawn by that era's burgeoning experimental-film scene, he visited several times to screen work and shoot footage. On Nov. 15, courtesy of the Three Rivers Film Festival, he's scheduled to return for the first time in at least a decade, and to present four of his classic films (all in restored 35 mm prints) plus three new videos, some of his first new work in years.

The Nov. 15 program includes "Fireworks" (1947), a trance-like film which arguably launched modern queer cinema by depicting, with both lyricism and camp humor, a young man (Anger himself) dreaming a violent sexual encounter with a bunch of sailors. ("Fireworks" also convinced Jean Cocteau to invite young Anger to Paris, where he lived for years.)

Also screening are a version of the gorgeous if much-revised "Rabbit's Moon" (1950-79) and "Kustom Kar Kommandos" (1965), Anger's famed, meticulously photographed, candy-colored short in which a stud in skintight trousers polishes his (hot)rod with a huge powderpuff.

But besides Anger's own typically irascible presence, the evening's centerpiece is 1963's "Scorpio Rising." The 30-minute avant-garde touchstone, shot in black-and-white, follows a motorcycle gang through a bacchanalia and a deadly race, wickedly incorporating Nazi symbology, a church desecration and footage from a Sunday-school Jesus movie. "Scorpio" invokes Anger's occultism (which blossomed in such later films as "Lucifer Rising") as it builds toward its ecstatically fatal climax. Alongside its masterful editing, the film's formal innovations include, especially, its soundtrack: 13 contemporary pop song, one for each scene, including "Heat Wave," "He's a Rebel" and -- to a montage of bikers leathering up -- "Blue Velvet." The weirdly evocative, often thrillingly ironic technique prefigured both modern film soundtracks (Martin Scorsese has acknowledged the debt) and music videos ... which influenced almost everything else since.

The three newer products of Anger to be screened Nov. 15 include: "Mouse Heaven," an excavation of Mickey Mouse mythology that screened at last year's Whitney Biennial; "Elliot's Suicide," a 16-minute video about the death of singer-songwriter Elliot Smith; and something titled, promisingly, "My Surfing Lucifer." 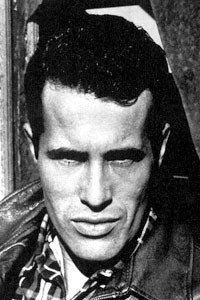 Kenneth Anger, in his youth