Ridley Scott's Moses epic has some fun spectacle, but too much broody wannabe drama

It's a story you'll remember from your Bible or The Ten Commandments: Moses, who lived among the Egyptian royals, is banished into the desert, where he receives a message from God that he is to lead the enslaved Hebrews out of Egypt and into the Promised Land. So, it's not fresh narrative that's the draw of Ridley Scott's Exodus: Gods and Kings (spoiler alert: and locusts!), but whether this journey is depicted interestingly.

From the beginning, Scott casts one aspect of the epic as a broken bromance between best buds Moses (Christian Bale) and Ramses (Joel Edgerton), the soon-to-be pharaoh. They save each others' lives, but their relationship cannot be sustained over the larger struggle each leader embodies. Ramses (Joel Edgerton) draws strength from tangible powers, such as wealth, institutions and armies, and for his own gain, while Moses is fueled solely by faith and hope in service of such community ideals as freedom and homeland.

Coming between the men is God, played here by a small English boy (Isaac Andrews). Despite his winsome looks, the little lad is straight-up Old Testament: He's openly derisive of Moses, and smites an unholy number of Egyptians.

Continuing the duality, Scott too splits the difference between semi-serious drama and spectacle, and the film's two halves are frequently at odds with each other. Bale's Moses is broody and sincere, even when kee-razy supernatural things are happening. (In an unintentionally funny line, Ramses pooh-poohs the rain of amphibians in his bedroom: "It's just frogs.")

The film is more enjoyable when it opts to just be entertaining: It opens with a huge battle; doubles down on kitschy Egyptian décor and fashion (no expense spared in the guyliner and man-wig budget); and the re-creation of the plagues is a million times more interesting than Moses fretting about his place in the world.

The digital effects are obviously so, but they also deliver the most fun scenes in Exodus. Armies swarming over vast landscapes like bugs. The various plagues (hailstones, fish kills, actual bugs). A spectacular chariot traffic jam on a mountain road. 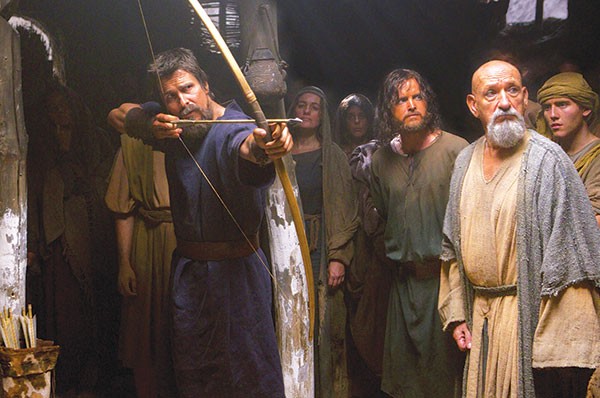 However, I'm sorry to say that the much-anticipated Red Sea scenes are disappointing: The parting is merely an ebbing, and when the water rushes back in, it assumes the form of a single wall-like wave. I envision Scott at the counter of SFX-R-Us, while a clerk shrugs and says, "Christopher Nolan bought all the really spectacular waves for Interstellar, and all I have left is this one kind of boring wave. But I can put some giant tornados on top of it ..."