The air you breathe. The way the government treats incarcerated people. How taxes are assessed. The very borders and links that bind – and divide – the county.

The next Allegheny County executive will have an array of weighty issues on their plate when they take office just over one year from now. Next year, voters will choose a new course for county government for the first time in 12 years; County Executive Rich Fitzgerald is term-limited, clearing the way for the first wide-open contest for the office since 2011.

Mayors, governors and presidents have come and gone since Fitzgerald was elected that year. Pittsburgh and Allegheny County have fundamentally changed since then, as has the region’s political environment. The campaign to choose his successor likely won’t resemble any past contest for county executive.

County government
Allegheny County adopted a home rule charter in 2000, which set up a legislative branch (the 15-member county council) and an executive branch (the county executive). The executive chooses directors for the county’s administrative departments and appoints people to boards and commissions, while council must approve new laws, annual budgets and some appointments.

Issues that weren’t part of the region’s political lexicon in 2011 are now central to many conversations about governance.

“I didn’t think as much about equity early on,” Fitzgerald said of the beginning of his tenure, “which I do now over the last five or six years.”

The region’s political climate has changed drastically since 2011, with a progressive shift emanating from Pittsburgh moving numerous elected offices to the left. A movement for racial and economic justice built during the Trump years and picked up even more speed during the 2020 George Floyd demonstrations.

Fitzgerald said he thinks “equity will be a big part of [the campaign]” to replace him. “How do we bridge the gap between the haves and the have nots?”

Unlike municipal governments that are responsible for local staples like paving, waste management, fire and police, county government focuses on forces that cross the region with no regard for municipal borders: Air quality, public health, criminal justice and human services are under the county’s purview. Its annual operating budget is more than $1 billion, and that figure doesn’t include all of the state and federal dollars that flow through its agencies.

PublicSource asked readers, advocates and potential candidates what issues they think will define the campaign in 2023.

The days of big steel and “Hell with the lid off” Pittsburgh may be long gone, but Allegheny County still has some of the worst air quality in the country. Just this October, there were two Air Quality Action Alerts, when pollution was so heavy for multiple days in a row that vulnerable populations were urged to stay indoors.

“I think the county executive race is going to be a huge opportunity to educate the candidates and the public about the county’s role in protecting the environment and protecting public health,” said Ashleigh Deemer, deputy director of PennEnvironment. Noting the county’s record of poor air quality, she said, “The county has some power over whether that continues.”

She said the county could beef up its Clean Air Act enforcement against major polluters, strengthen pollution limits on certain facilities and look into expanding the rule that requires polluters to ease up when air quality is particularly poor.

Patrick Campbell, the executive director of the Group Against Smog and Pollution [GASP], said on top of exercising those formal powers, he hopes the next executive engages more with community groups.

“They should be hearing directly from residents about concerns related to air quality,” Campbell said, noting the community groups like GASP, academic experts and monitoring networks that exist in the region.

Deemer acknowledged that the health department has made significant strides recently in assessing fines against polluters. The county fined U.S. Steel $4.5 million this year for pollution rule violations at its Clairton plant.

Sara Innamorato, a state lawmaker who told PublicSource she is considering a run for county executive, said “environmental justice” should be a top priority for the county’s next leader.

“We have an unprecedented amount of money coming from the federal government,” said Innamorato, a progressive Democrat from Lawrenceville. “It will be important to use those monies to grow the green economy and green manufacturing, and invest in job creators that could take root in our county.” 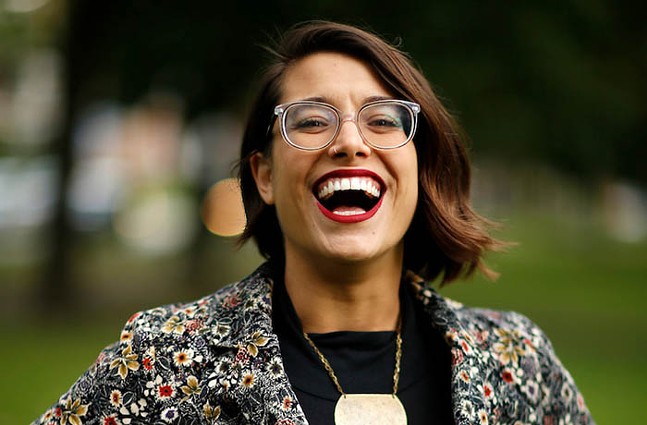 Reader priority: “The next candidate should commit to changing the jail culture that has allowed inhumane conditions to exist for years.”

The Allegheny County Jail has been the subject of relentless negative attention in recent years. Incarcerated people have decried inedible food, inhospitable temperatures and inadequate medical care. The warden caused an uproar, and a rare rebuke from the Jail Oversight Board, when he contracted with a controversial training provider last year. And most somber of all, there has been a string of deaths in the jail, raising alarm in the community and leading the Fitzgerald administration to hire a contractor to conduct a “historical review” of fatalities.

The next executive will inherit an understaffed jail and a warden whose removal has become a goal of advocates and the correctional officers’ union.

The executive by statute has a seat on the Jail Oversight Board. Both jail critics and the correctional officers’ union leader concurred that they want the next executive to end Fitzgerald’s practice of sending a proxy to the board’s meetings in his stead.

Tanisha Long, an organizer with the Abolitionist Law Center, said, “The first step, and this is such a low bar, is showing up. We need somebody who shows up and listens to the families … If we start there, we can start getting somewhere.”

“What we would like to see is [the next executive] to take their duties and responsibilities seriously,” said Brian Englert, the president of the correctional officers’ union.

Erin McClelland, a county human services contractor who is the only person so far to formally announce a campaign for executive, said she would “be at every jail board meeting, having conversations,” and she would strive for an environment where incarcerated people would suffer “zero harm.”

“We will build a culture where hurting our constituents is not appropriate. It will not be part of who we are anymore,” McClelland said.

Englert said a top concern for future leaders should be bolstering the number of correctional officers, which has been in decline in recent years and has resulted in Englert’s union members working forced overtime frequently.

The Fitzgerald administration has undertaken some initiatives to broadly reshape criminal justice in the county, but without much tangible outcome as yet.

The next executive “will need to focus on rethinking the structure based on providing public safety and not just putting people [in the jail] because they’re poor and they can’t afford to pay bail,” Innamorato said.


Dave Fawcett, an attorney and former county councilor who is considering a run for executive, said the county should focus on reducing the jail population and diverting people who need treatment.


“We’re cycling addicts and mentally ill people through the jail,” Fawcett said. “It’s not right. It makes no sense.”

The Fitzgerald administration awarded a contract this year aimed at designing a jail with a lower capacity. But it’s unclear how the county plans to reduce the jail’s population or if the administration expects the plan to proceed before the next executive takes over. 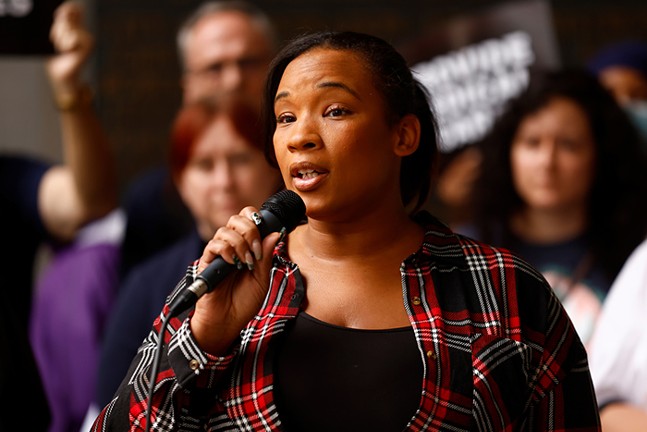 ‘Conflict of interest’ with property taxes

Fitzgerald’s tenure has been bookended by property tax-related controversies. He almost ran afoul of a court in 2012 when he tried to avoid conducting a countywide property reassessment and then later tried to throw out reassessment data.

In 2022, the county is the defendant in a lawsuit alleging that it systematically overcharged property taxpayers whose assessments were appealed, which may well lead to government revenues being slashed and mass refunds coming due from school districts and municipalities.

The next executive will have to address what appears now to be a broken system.

“Blow it up,” suggested Michael Suley, a real estate consultant who led the county’s Office of Property Assessments from 2006 through 2012. (Suley is working with the plaintiff’s lawyers in the suit against the county.)

Suley said the assessment office, whose determinations affect county revenues, must be insulated from the executive branch, whose budget stands to benefit from assessments rising.

“If the county is a taxing body and an assessor, there’s a conflict of interest there,” Suley said.

Values have not been reassessed across the board since 2013, but owners or taxing bodies can appeal for spot reassessments of individual properties. School districts file appeals when homes are sold, raising the tax rate on the unsuspecting buyer, in what Suley calls a “newcomer tax.”

Suley said while he doubts a politician would favor a mass reassessment for fear of political blowback, the perception that reassessment would lead to higher taxes is a wrong one. By law, if assessed value in the county goes up, the millage rate must decrease. “The majority of people will not see their taxes go up,” he said.

In 2008, then-County Executive Dan Onorato and Mayor Luke Ravenstahl agreed to push for city-county merger. It went nowhere and since then, proposals to address the region’s famous fragmentation have been much less ambitious.

Pittsburgh Controller Michael Lamb, who told PublicSource he is considering running to succeed Fitzgerald, said the next county executive will need to be a facilitator between municipalities, many of which struggle to provide services to shrinking populations.

“We are going to over the next 10 years have serious discussions about how we provide various services to our citizens,” he said. He pointed to the patchwork of hundreds of emergency service providers in the county. “These are things that any reasonable person looks at and realizes, something’s got to be done.”

Lamb was an early supporter of the initiative to annex Wilkinsburg into Pittsburgh, and said there should be broad discussions around consolidation among the county’s 130 municipalities. But the Wilkinsburg effort, spurred largely by a community development group, devolved into a polarized, bitter fight, rather than illuminating a path for other struggling towns to cure their ills.

“Any of this change has to bubble up from the citizens themselves,” Lamb said. “It can’t be the next county executive coming out and saying, ‘OK, we’re going to merge this, we’re going to do this.’ It’s got to be organic. … I think part of the job of county government is to start to facilitate that discussion.”

Chris Briem, a University of Pittsburgh demographer who has studied local government, said Pennsylvania goes further than other states in assigning responsibilities to municipalities. That makes things more difficult in Allegheny County, where many municipalities struggle financially. He said there is precedent, though, for the county taking on functions — like health and human services — that formerly rested with cities.

“As issues have become broader geographically and broader generally, the county evolved to provide those services,” he said. He later added, “If there was going to be fundamental change, it would only happen with the strong support of the county executive.”

The county government has no formal power to merge municipalities or their services. Observers agreed that the post is an intermediary between governments, a unique facilitator between municipal governments and a conduit from local leaders to Harrisburg and Washington, D.C.

“The authority of the office is the ability to bring everybody to the table,” Fitzgerald said.

Parties will nominate candidates for the office in primary elections to be held on May 16, 2023.

This article was originally published by PublicSource, a nonprofit newsroom serving the Pittsburgh region. Read PublicSource's coverage of this race here.


Charlie Wolfson is PublicSource’s local government reporter and a Report for America corps member. He can be reached at charlie@publicsource.org or on Twitter @chwolfson.

This story was fact-checked by Jack Troy.