Executive Decision: Race to replace Onorato heating up on both sides of the ballot | News | Pittsburgh | Pittsburgh City Paper

Executive Decision: Race to replace Onorato heating up on both sides of the ballot

When Allegheny County Chief Executive Dan Onorato ran for re-election in 2007, he faced only token opposition. The person aiming to be his successor, however, won't be so lucky. The primary election may be three months away, but the field to replace him seems to be getting more crowded by the day.

For the Democrats, County Controller Mark Patrick Flaherty, of Mount Lebanon, will be squaring off against County Council President Rich Fitzgerald, of Squirrel Hill. On the Republican side, former county Tea Party leader Patti Weaver, of Fox Chapel, will be matched against At-Large County Councilor Chuck McCullough, of Upper St. Clair.

Anyone who attended Rich Fitzgerald's Jan. 28 campaign announcement might have likely tagged him the front-runner against Flaherty, the two-term county controller. Fitzgerald packed his event with Democratic heavyweights like U.S. Rep. Mike Doyle and state Rep. Dan Frankel, while circulating a list of 66 endorsements -- from elected officials to unions and ward chairs.

Democratic officials "usually wait until the endorsement is done or until after the nomination before endorsing anyone," says Fitzgerald. This year, the party endorsement won't come until March 6, but Fitzgerald contends that "these are people that I have worked with out in the community. I'm not just some guy from the courthouse. ... I think that's really a distinction."

But veteran political analyst Bill Green says it's too soon to count Flaherty out.

"Who's the early favorite here?" asks Green. "A guy [Flaherty] who's won county-wide office twice and has 100 percent name recognition thanks to himself and his family? Or a guy [Fitzgerald] who has won a single district ... and probably doesn't have the name recognition that he thinks he has?"

Fitzgerald, who has served four terms on county council, has just more than $728,000 on hand, according to campaign-finance reports. The lion's share of that money, however, is a $500,000 personal loan from Fitzgerald to his own campaign, leaving him with some $228,000 from other sources.

Flaherty, meanwhile, has booked $220,000 in cash, including several major gifts. Among them: $15,000 from the campaign fund of former state treasurer and auditor general Barbara Hafer; a total of $12,000 from attorneys Girard and Gregory Evashavik; and $11,000 from Jeff Zell, owner of a Strip District construction-management and civil-engineering enterprise.

Flaherty boasts that his experience sets him apart from Fitzgerald. Flaherty says he has spent the past two terms conducting audits of the county, such as an audit on the massive amounts of overtime paid at the Allegheny County Jail. If elected county executive, he says, "I will be able to act upon performance-audit proposals that save tax dollars and improve services." He also says being elected twice in county-wide elections gives him "a broader perspective" on county issues than Fitzgerald has.

One of the biggest issues facing the incoming county executive will be dealing with the issue of Marcellus Shale drilling, particularly when it comes to county-owned land.

For his part, Fitzgerald says he wants Allegheny County to become "the energy capital of the world," thanks in part to the extraction of natural gas. He calls Marcellus Shale drilling a "great opportunity" that will create jobs for county residents. (His campaign has, not surprisingly, received $2,000 from political committees tied to natural-gas companies.)

Flaherty strikes a more cautious note. Although the Marcellus Shale can be a valuable resource, he says, "We need to make sure that if we are going to do it, it is done safely [and] cleanly. We have to ensure that our waterways -- one of our other most valuable resources -- are protected."

"The GOP didn't run anyone against Onorato last time and they wait for four years before getting a candidate this time around," says Green, the political analyst. "This will be a much more local election than 2010 was."

Green also notes that GOP candidates have yet to emerge for other countywide races, including controller, treasurer and district attorney. "That fact alone means this election is not taking on the flavor of 2010," Green says.

But there's no shortage of interest in the top job. A third potential contender, Mount Lebanon Commissioner Dakshinamuthy Raja, is also mulling a run. (When contacted by City Paper, he said he had not yet made a decision.) And although he introduced Weaver at her Feb. 10 campaign announcement, county GOP chairman and former county executive Jim Roddey says he wants to see how the debate plays out.

"I think sometimes primaries can be helpful," says Roddey. "It can help sharpen the candidates and get them familiar with the issues and develop a voter base.

"If I had a choice, I would not have a primary, but I'm not troubled by it."

If Raja does not run, however, GOP voters could have a tough choice.

On the one hand, the Tea Party has been a polarizing movement. And while no longer a Tea Party member -- she stepped down to campaign as a Republican -- Weaver stresses what she calls "the basic Tea Party principles of fiscal responsibility, a constitutionally limited government and free markets."

She says she has already begun working on a "business-friendly tax law ... creating parity with other states." And that on the local level, she favors "reduced spending and reduced regulations" to make the county more inviting to corporations looking to open in the county.

Roddey says Weaver "doesn't fit the profile of the portrayal of the Tea Party people by the mainstream media. She's from Lehigh College, Harvard MBA and a Fox Chapel resident. ... I think if people listen to that, they'll be able to overcome any prejudices they might have about a Tea Party person."

If they don't, Republicans can always get behind McCullough, who has problems of his own. The attorney is currently under indictment on charges that he embezzled funds from an elderly client -- and allegedly directed some of that money to the coffers of GOP candidates.

McCullough says his pending trial won't interfere with a campaign. "I am innocent of those charges," he says, and predicts the case could be tossed by a judge before trial. He has a motion to dismiss the charges pending.

And on the issues, McCullough says he's an ideal GOP candidate. He favors privatizing county assets like the Pittsburgh International Airport to raise revenues while lowering taxes. He's also sought a reduction in the drink tax, and sued to stop property tax reassessments -- sure to be a hot-button issue.

"I've already been doing things as a councilman that I think Tea Party members will think is right up their alley," says McCullough. "But I can hit the ground running and I've shown that I am willing to do whatever it takes to fight for the citizens of this county." 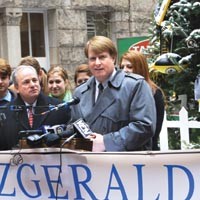 Charlie Deitch
Rich Fitzgerald is just one of four candidates so far planning to run for Allegheny County Executive.