“It is such a sweet structure.” 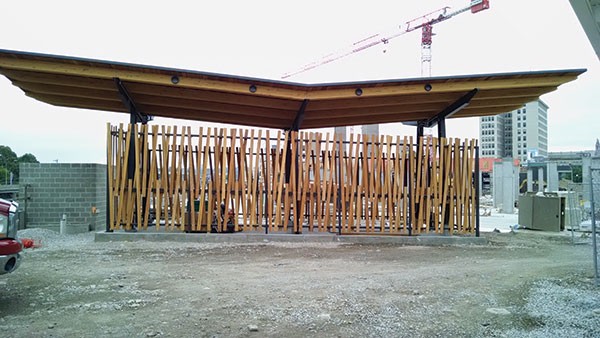 The word garage is typically associated with one other word: car. That’s not the case in East Liberty anymore.

By the end of September, a garage built exclusively to house bicycles will be up and running as part of the revamped East Liberty Transit Center, which sits at the corner of Shady and Penn avenues, straddling the MLK Busway.

According to Rebecca Schenck, project specialist at the Urban Redevelopment Authority, the garage will hold up to 80 bicycles behind locked gates. The bikes can be accessed using an electronic key fob and the garage will charge a still-undetermined annual membership fee. Fees for bike garages typically range from $100-150 per year. There will also be free bike racks just outside the garage for commuter use.

“I think it is super great, and it is something that I would use,” says Anne Marie Toccket of the Highland Park/East Liberty Bike-Ped Committee. “I live in Highland Park, a bit more than a mile to the busway, which is just a bit too far to walk.”

Bike Pittsburgh’s Dan Yablonsky says the advocacy group acted as a cheerleader and consultant for the garage. He is excited for the pneumatic and spring-loaded double-decker racks that offer minimal lifting and save space since bikes will be stacked.

“It is such a sweet structure,” says Yablonsky. “And as the city becomes more dense, space is at such a premium.”

Though bike garages are an increasingly trendy idea for cities, the East Liberty garage will actually be the third of its kind in the Pittsburgh. The first were two green shipping containers on Seventh Street in the Cultural District that offer 26 spaces for bike commuters, and are owned and managed by the adjacent Century Building. The other bike-parking facility is located in Pittsburgh Parking Authority's Third Avenue Garage and has secure spaces for 24 bikes.

But unlike these other bike garages, says URA chair and Mayor Bill Peduto’s chief of staff Kevin Acklin, the East Liberty garage is meant to encourage people to ride their bikes in conjunction with using public transportation, particularly the busway.

“The concept of riding from home to link to a bus to Downtown is a whole new idea for the city,” says Acklin. “This can unlock the whole epicenter of East Liberty.”

But only if riders feel safe getting to the transit center in the first place.

Currently, bicycle routes with heavy bike-friendly infrastructure fall short of connecting all the way to the East Liberty Transit Center. The Beechwood Boulevard bike lane (the main route from Squirrel Hill) currently connects to paths in nearby Mellon Park and Bakery Living apartments, but these end more than half a mile from the garage.

Schenck says there are plans to build bike-friendly infrastructure along Aurelia Street and Shady Avenue that will eventually connect the transit center to the paths in Mellon Park. Construction is slated for spring 2016, with hopes that it will be completed by the end of summer 2016.

Safe passage from the north might be a little farther off, however.

North Highland Avenue is a designated bike-friendly road with sharrows (painted road signs reminding drivers that bikes often use the route) that start at Highland Park, and run south through East Liberty, but end two blocks short of the garage. “I think the biggest gap is East Liberty,” says Toccket. “People use that busway everyday. I think it is really difficult to access that busway where it is right now.” 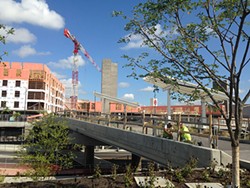 Photo by Ryan Deto
Work on the pedestrian and bicycle bridge at the East Liberty Transit Center is almost completed.

Toccket says the intersection of Penn and Highland avenues (where the sharrows end) is one of the most dangerous in the city, and that the area is not really safe for the crowd who would ride “dressed in their work clothes.”

When asked if there were plans to make the East Liberty connection to the transit center safer, Schenck says, “Nothing set in stone right now, but we are currently working on the redesign to change Penn Circle and looking to make room for bikes in that area.”

But Schenck, who has been managing the project since the URA got the funding in 2013, is hopeful that the East Liberty bike garage will increase ridership in the area and lead to more bike-commuting projects.

“I hope that people will support the bike garage, and hopefully that will give us opportunities to do this other places in the city,” she says.