“If you can cook, then it’s usually the one thing you can go and get a job anywhere.”

The late, great Anthony Bourdain compared kitchen life to a pirate ship: employees are the crew, bonded by companionship born of a nightly trial-by-fire nature. Yet there’s also a meticulously choreographed dance that makes up the workings of meal service. Restaurant work is a fast-paced, on-the-go profession that requires creativity, flexibility and constant adaptation in order to succeed.

Creative people of all types are drawn to work in restaurants, sometimes for the hours or the pay. Regardless of the reason, it’s likely many of the people in the industry have some sort of creative venture they are supporting through restaurant work. For the music issue, CP examines the intersections of being a musician and working in the restaurant industry.

Jonathan Ahn, 34, has been playing bass and singing for his band, edhochuli, for the last 10 years. Around four years ago, he joined CALYX (which joyfully refers to itself as a "hard pop pizza punk band" on social media). Both bands tour fairly frequently and much of Ahn’s time is dedicated to making music and being on the road. That’s part of the reason he works at Spak Brothers Pizza in Garfield.

“It’s perfect. It pays really well, and I can pretty much go on tour whenever I want to,” says Ahn.

When he first interviewed with the owner, Ahn’s only condition was that he needed time off to tour.

“The first year I worked at Spak, I probably worked all together four months because I was on tour so much,” he says.

Other than occasionally feeling a little guilty for taking off for a few weeks or months, he says Spak Brothers has wholly supported his pursuit of music.

“If you can cook, then it’s usually the one thing you can go and get a job anywhere,” says Ahn. 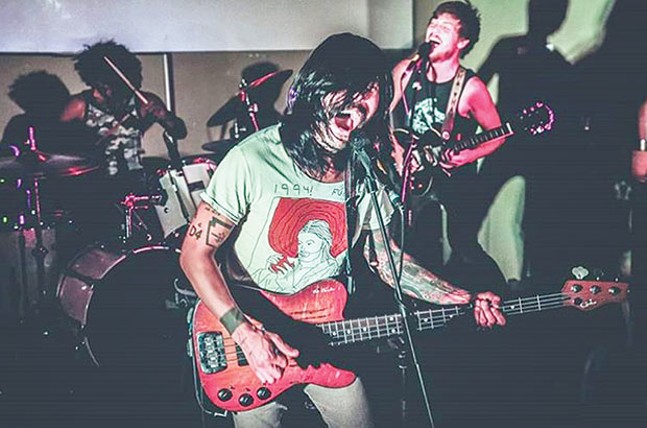 Because Spak is his main source of income, when Ahn is home in Pittsburgh, he feels it’s important to be a reliable part of the team that runs the restaurant. He’s transferred a lot of that camaraderie and work ethic from his music career.

“Doing music has allowed me and my bandmates to meet all these amazing people and see the world because I picked up a guitar,” says Ahn.

Devan Mercurio, 25, has been studying opera since she was 18. She’s been using her job as a server at Mad Mex to support herself all along. Although she interns at Quantum Theater and teaches voice lessons, she says Mad Mex is her main source of income.

Mercurio credits her job at Mad Mex with allowing her the flexibility in her schedule to perform and travel to study opera. Last year she spent three months in Paris studying and said that she received support not only from her bosses who held her job, but also from her regulars, who often show up to performances or tip her a little extra when they know she’s planning to travel.

“You have security, even though the creative path you’ve chosen doesn’t have a lot of security,” she says.

Working in the service industry has also helped Mercurio become less shy, sneak in vocal practice while she waits tables and gives her the time for meetings and practice in the mornings. However, she also tries to maintain a balance.

“Your body is your instrument,” she says.

To keep hers working, Mercurio avoids alcohol before performances and schedules her sleep so she can be fully rested.

Mercurio is also trying to make opportunities for young singers in her field.

“With [people in the field of] opera, they say ‘You have to age [your voice] like a cheese or a wine and then we’ll let you perform,’” she says.

She’s currently involved in Opera on Tap, a group that performs at Allegheny Wine Mixer every third Tuesday.

Even though they come from two radically different music backgrounds, Mercurio and Ahn agree that part of balancing their jobs and musical lives, it's something they take very seriously. Both practice and tour but try to maintain a manageable balance that allows them to do what they love.

“I gotta make a paycheck, so I can buy a van and hit the road,” says Ahn.

Listen before you go: DLTSGDOM! and The Grey Estates celebrate their birthdays with a joint concert this weekend

Drinking sake with a state representative: My Waterworks bar crawl