Michael Telek referred to Brady as a cheater in a KDKA chyron, was told he would be reprimanded, but was then fired. 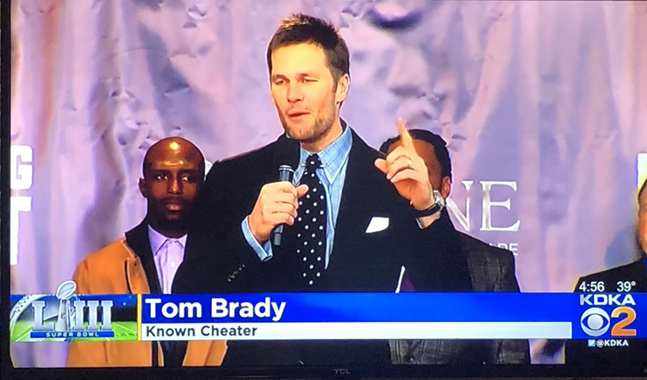 Screenshot of KDKA broadcast
Most Pittsburghers loathe New England Patriots quarterback Tom Brady; he has broken the hearts of too many Steelers fans too many times.

But there are more reasons to dislike Brady. He was suspended four games for violating NFL rules for a scandal involving deflating footballs, aka Deflategate. His team also got in trouble for recording other teams' practices, presumably to get an edge in games, aka Spygate.

To most people, this is called cheating.

Michael Telek, a KDKA producer up until about 24 hours ago, thought similarly and decided to have a little fun with a chyron (the bar that includes text in TV news programs). During a Monday segment on the Patriots' appearance at the Super Bowl this weekend, a chyron appeared for two seconds while Brady was seen saying “we are not quite at the end yet, we have one more to go.

Social media caught wind of the chyron and it quickly went viral.


The local news in Pittsburgh is not holding back today 😂


Telek acknowledges that the chyron didn’t fit the mold of objective reporting, but says “it was a simple joke” that was one of the last segments of the broadcast.

“It was something light,” says Telek. “Everyone in Pittsburgh hates Tom Brady.”

Telek says he didn't bring up the idea to use the "Known Cheater" graphic with anyone at the station beforehand. He believes being fired was a severe response to his indiscretion.

KDKA also recently shared a news story about a Kentucky boy who won a science fair for proving that Brady was a cheater.


DID YOU SEE THIS? A 10-year-old from Kentucky took down @Patriots QB Tom Brady in his winning science fair project, setting out to prove that deflated footballs give players an advantage. https://t.co/13cRQcDW4J

Telek says that on Monday, when the station noticed the chyron, he was sent an email from management saying that his action was a “PR nightmare” and he would be reprimanded. But instead, the next day he was fired after a meeting where an internal investigation deemed his actions “intentional.”

Telek believes he was fired because the story went viral. National media sites like Sports Illustrated, Yahoo Sports, Barstool Sports, and others covered the story. Several tweets showing the chyron were shared hundreds of times.

KDKA did not respond to comment on claims that Telek was fired because they story gained so much attention. But the station did submit this comment for the story: “While fans are entitled to have personal opinions, we have a journalistic responsibility to provide unbiased reporting. The graphic that appeared Monday violated our news standards. The individual who created the graphic no longer works for KDKA-TV.”

Telek says he doesn’t hold hard feelings toward KDKA, and would take his job back if the station offered it. Pittsburgh is his hometown and he says he worked at TV stations in Dayton and Steubenville, Ohio before working his way up to his position at KDKA. He has worked for KDKA since June of 2018, and he recently purchased a house in the Pittsburgh area.

Hi there, I got fired for this joke. I just bought a house so that is putting a pinch on things. Once I land a job there will be a GOAT Giveaway where I will donate the money to charity in Tom Brady's name.https://t.co/KzXhpbuOpF


A GoFundMe crowdfunding campaign has been created for him after he lost his job, but Telek says he won’t use the money earned there for himself, and instead donate the money to a worthy local charity in the name of Tom Brady.

“Andy Warhol says everyone gets their 15 minutes of fame,” says Telek. “I guess this is mine.”