There are a lot of reasons I disliked the Point Park University production of Andrew Lloyd Webber's Evita. Maybe the biggest is, I find myself having to stick up for Lloyd Webber, a man I believe has the talent of lichen. So yeah, I hate him, but still I'm left slackjawed by what's been done to his work.

This musical about the rise and death of Evita Peron, wife of Argentine fascist Juan Peron, isn't a great work. Performed a particular way, however, it can be an effective evening of theater.

But this production, directed by John Shepard, is almost a showcase of unfortunate choices. The role of Evita has been split into two and the role of Che is now being played by four people. I guess they wanted to cast as many students as possible ... but believe me, this disjointed, distracted and disastrous production isn't doing anybody any favors, least of all the student. (And certainly not the audience.)

Nobody gets to play a wholly formed character, and the journey we're meant to take with Evita, from hardscrabble beginning to dazzling height, never materializes.

And the splintering of Che is even worse. Instead of functioning as a moral counterpoint to Evita, he's become a wandering quartet with no fixed identity. The "role" is now given all the incidental lines, so now a character based on Che Guevara contemptuously complains, "Things have reached a pretty pass / When someone pretty lower class / can be accepted and admired." Love or hate Guevara, he did spend his life trying to bring acceptance and admiration to the lower classes. So who the hell's this guy on stage supposed to be?

There is only one successful choice made the entire night -- filling these roles with this selection of outstanding singers. Jason Lee Garrett, Julia Warner, Courtney Bassett and Jaclyn McSpadden lift their numbers heavenward. The four playing Che -- Justin Lonesome, Tyler Scherer, Adam Soniak and Zuri Washington -- leave you wishing each could have the entire role alone. And Kevin O'Leary's singing of Peron is, quite easily, the best I've ever heard.

They're bright spots in a painfully unfortunate evening. 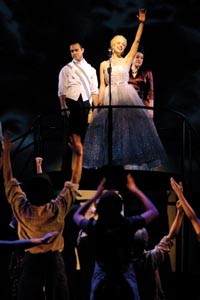