Toothless takedowns and the 2016 election

Back in April 2013, WWE ran a promo for Monday Night Raw in which The Undertaker promised to eviscerate his opponent, CM Punk. Sounds like pretty standard wrestling talk to me, but I don't really know what standard wrestling talk sounds like (I know it involves a great deal of pointing). But as Bleacher Report wrote in the days following the promo, "choosing 'eviscerate' was a misreading of the WWE audience and of the meaning of the word" (kinda condescending, but hey). Eviscerate actually means to physically disembowel a body; disembowel means to remove the internal organs; organs are self-contained parts of organisms that perform vital functions, from the Greek organon, meaning tool or instrument; Greece is a country in Europe known for developing cool words. 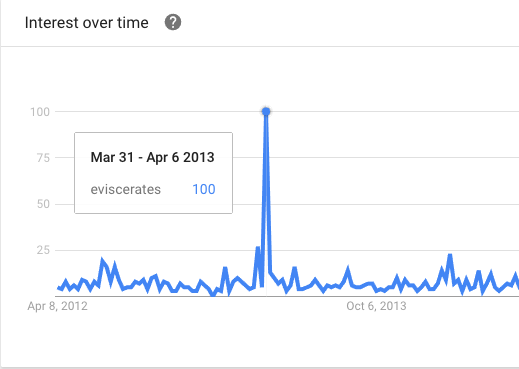 WWE commentator Michael Cole clarified that The Undertaker meant the word metaphorically, that he was going to "verbally eviscerate" the dude. Thank goodness.

Over the course of the 2016 presidential election, I noticed that Trump was being eviscerated on a regular basis by a rotating cast of pundits, comedians and political commentators including John Oliver, Samantha Bee, Rachel Maddow, Trevor Noah, Dan Rather, Charles Blow, and many others. Sometimes he was being destroyed and other times obliterated, but the message was clear: Donald Trump was metaphorically dead. Very very dead.

And then he won.

It turns out those eviscerations, even in the metaphorical/verbal sense, weren't the knockout punches headline writers thought they were. I'm not interested in another "this is why he won" story, but this mismatch in rhetoric and reality feels like a crystal clear example of the political echo chambers that led to such a surprising result in November. (It's also worth noting that Trump supporters and the right had plenty of eviscerations in the 2016 campaign, so is this what having your guts ripped out feels like?)

Going through the frequency of "evisceration" searches on Google show that The Undertaker's threat in 2013 caused the biggest spike, but most of the other high points took place during the 2016 election. Since Trump announced his candidacy on June 15, 2015, here are the top five related terms searched alongside "evisceration:"

Much has been written about the superfluous use of the word and the dangerous, blind self-congratulation in these headlines. Two good stories on that: "Our Gutless Eviscerators" from Slate; "The Limits of the Late-Night Comedy Takedown" from The Atlantic.

But since this blog started with a WWE reference, I thought it'd be more fun to rank the top five eviscerations of the presidential election. These are the top five weeks that saw spikes in searches for defining the word.

1. The Eviscerator: Rachel Maddow
The Eviscerated: Donald Trump
Date: December 20-26, 2015
Success?: No, not really. He's the president. He says crazy shit nonstop, acts as impulsive and childish as he can muster, and many of his supporters stand by him just the same. Doing this research, I found that Maddow is one of the most prolific eviscerators of all time. If there's a voice Trump supporters associate with smug, coastal, intellectual elitism, it's probably her's. And given the fact that this is from Dec. '15, the failure of this evisceration stings pretty bad.
Read/watch here.

2. The Eviscerator(s): John Oliver and Trevor Noah
The Eviscerated: Headlines with "eviscerated" in them
Date: February 26 - March 4, 2017
Success? Oh hell yeah. I know people have mixed thoughts on both of these guys, but I'm a fan of both. The difference between them, though, is that Last Week Tonight executes publicity stunts that have real-life consequences, even if they're minor. The big joke of "evisceration" is that such a violent act is in practice a thoroughly toothless act. Nice to see some self-awareness and modesty, because the eviscerated seem to be doing just fine. Watch below.

3. The Eviscerator: Barack Obama
The Eviscerated: Donald Trump
Date: June 12-18, 2016
Success? No, not really, once again. Though Obama's rebukes throughout the years are almost always stronger than left wing pundits or comedians, possibly because the constraints of decency required him to make his oh-snap moments subtle and nuanced and tricky to confirm. In this instance, Obama doesn't use Trump's name, which is often the most effective way of pissing the dude off. There may be a lesson there.
Video in story.

4. The Eviscerator: Keith Law
The Eviscerated: Tim Tebow
Date: October 9 - 16, 2016
Success? This was a big week for spilled viscera. Other eviscerators from headlines that week include Hillary Clinton, Kellyanne Conway and Roger Waters. And it makes sense. The election was heating up, Trump's Billy Bush video had just been released, but most importantly, a guy named Tim Tebow wanted to play baseball. Some quotes from Keith Law's takedown:

"The Mets’ decision to sign Tebow for $100,000 as, essentially, an undrafted 29-year-old free agent, where any other player would be lucky to get $1,000 and a plane ticket, was a craven, mercenary move befitting an independent-league team desperate for the added revenue from ticket sales ..."

"Tim Tebow is in the Arizona Fall League. He might be better suited to playing in an Arizona high school league. His presence here is a farce, and he looks like an imposter pretending to have talent he does not possess."

5. The Eviscerator: Los Angeles Times
The Eviscerated: Donald Trump
Date: April 2 - 8, 2017 (i.e. this week)
Success? Ehh. It's an infuriating, anxiety-inducing piece of writing, which is kind of just what life is like now. But it is a step above previous attempts to take him down. It's thorough, concise and feels like it's the beginning of a mission or something, which is encouraging. All of these eviscerations and destructions and scathing takedowns feel pointless, but it's possible that they're chipping away at his seemingly impenetrable facade.
Read it here.

It's a good idea to keep hammering him, calling him on his lies and manipulation, and verbally eviscerating him when possible. Maybe we should just stop calling it "evisceration" and "destruction," because while they might be helping, they're certainly not the knockout punches that echo-chamber clickbait headlines tout them as. You can click on it, feel good about the takedown, but it's important to ask yourself if it's really as oh-snap, truly as blistering, as scathing as they say it is. You gotta go with your gut(s).