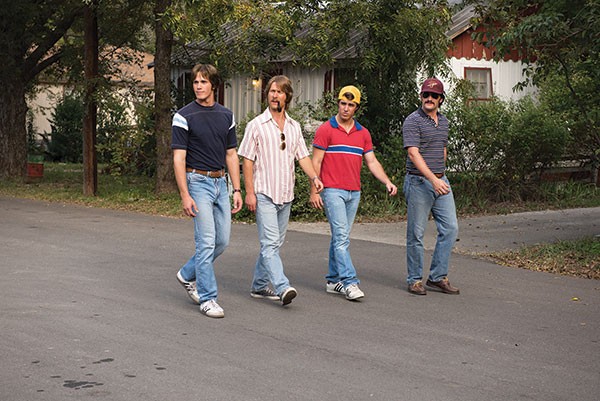 The dudes of Everybody Wants Some!! out walkin’ and talkin’

There was a time when you could unironically make your entrance in an Olds 442 blasting “My Sharona,” before stepping out of that ride and hoisting a milk crate of vinyl records onto the hip of your high-waisted jeans. That time was 1980, and one kinda-lazy, kinda-busy weekend of that year is the focus of Richard Linklater’s ensemble comedy Everybody Wants Some!!

Jake (Blake Jenner) is a freshman at Southeast Texas University, and makes his aforementioned arrival on the Friday before school starts. He moves into one of two adjacent houses set aside for members of the school’s baseball team. He’s more or less our guide in this loose-limbed tale. We meet the rest of the guys (so many that you’ll be distinguishing them by moustache style); take in a few dances; mack on girls; competitively engage in all manner of sports (from baseball to table tennis to mud-wrestling); drink and smoke; and thoroughly enjoy a carefree interlude between adolescence and adulthood.

Like its spiritual ancestor Dazed and Confused, Linklater’s ode to 1970s high school good times, most of Everybody’s pleasures are in just hanging out: the guys play records, play pranks and banter, argue and stoner-philosophize. (The importance of really listening to rock is “finding yourself in the space between the notes they’re offering.”)

Through the secret male-bonding language of insults and fart jokes, they also form friendships. These could even be of the life-long or life-changing variety, but who knows: The first day of college is rife with possibilities of who and what is to come.

Once again, Linklater is focused on time and its passages, themes he explored in the everyday non-time of Slacker, the precise windows of Before Sunrise and Before Sunset, and the 12-year chronology Boyhood. Everybody sports the joke of a countdown clock, marking the minutes left until school begins. (The story also ends at a beginning, the first class.) The guys in the houses are an assortment of ages; if they stood still long enough, you could plot them on a continuum of early manhood from boyish noob to almost adult.

Like most college films, this one is all about the dudes, and it reputedly draws its inspiration from Linklater’s own experiences. There’s a rosy nostalgia to it, a halcyon weekend before personal disappointments, terrifying school exams and the various crises of the 1980s settle in. These baseball bros are funnier, looser and less entitled jerks than one would expect (or remember from one’s own life), but the trade-off in verisimilitude makes them far more enjoyable to hang out with.