The group formed in the 1970s, when the youngest current member hadn't been born yet. 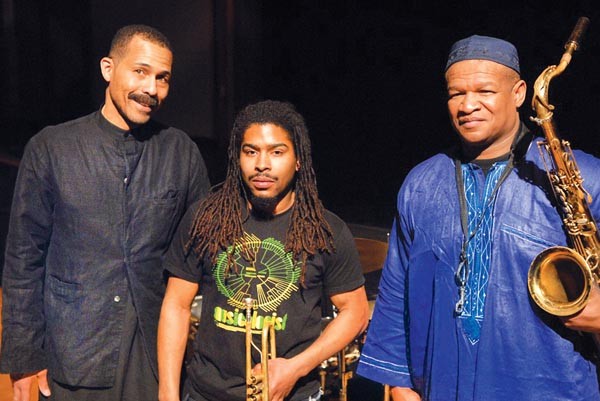 When Kahil El'Zabar started the Ethnic Heritage Ensemble, he had a specific idea in mind: just percussion and horns. "If you don't have a bass or piano and you have rhythm, your horn players are going to become more rhythmic," he explains, "because they're going to hold the bottom with the tonic. But at the same time, it's going to be more open melodically in terms of the inventions because there is no chordal constraint."

The origins of the band date back to the mid-'70s. El'Zabar had played with members of the Art Ensemble of Chicago, whose credo of "Great Black music from the Ancient to the Future" incorporated everything from traditional jazz to shrieking horn solos. He also has experience playing with Stevie Wonder, Cannonball Adderley and Nina Simone. "I've been really lucky in terms of mentorship," he says. "I do a lot of different genres, because that's what my mentors taught me."

El'Zabar has been the one constant since the Ensemble's inception. Current tenor saxophonist Ernest Dawkins joined in 1997, already a leader of his own groups, and an established player who balances grooves and a sense of free adventure. Trumpter Corey Wilkes, born a few years after the band was founded, also has wide-ranging experience as a leader who can straddle funk and free jazz. The best example of his versatile skills came when he was asked to fill the big shoes of the late Lester Bowie in the Art Ensemble.

In previous visits to Pittsburgh, the trio proved that even with a spare lineup, everyone fills out the sound. When Dawkins or Wilkes plays a solo, the other player might accompany to keep the foundation of the tune in check. El'Zabar's contributions aren't limited to the trap kit either. He often wears ankle bells to provide a pulse while he taps out a groove on the mbira (finger piano), which sounds hypnotic enough to sustain itself for upward of 10 minutes. He also plays hand drums and, when he gets behind the drum kit, can unleash an exciting free-flowing pulse.

The Ethnic Heritage Ensemble has the potential to impress fans of straight-ahead jazz and those into more avant-garde adventures. This balance between tradition and innovation seems to be a major quality of the band's home base. "One thing I really like about Chicago now is the camaraderie that we've grown from," El'Zabar says, referring to Art Ensemble members Bowie and Malachi Favors, adding that current twenty-somethings perpetuate that same feeling. "It's different from New York because we're able to maintain interpersonal relationships above our income incentives. We eat and hang out, we bowl. We don't have that same economic pressure at such an intensity. We can focus not only on making money with music but making a life with it."

He looks forward to uniting jazz fans of different stripes with his upcoming appearance. "I hope we all get beyond those [stylistic] factions and get into the creative ritual of sharing," he says.