“People coming should be prepared to be interacted with." 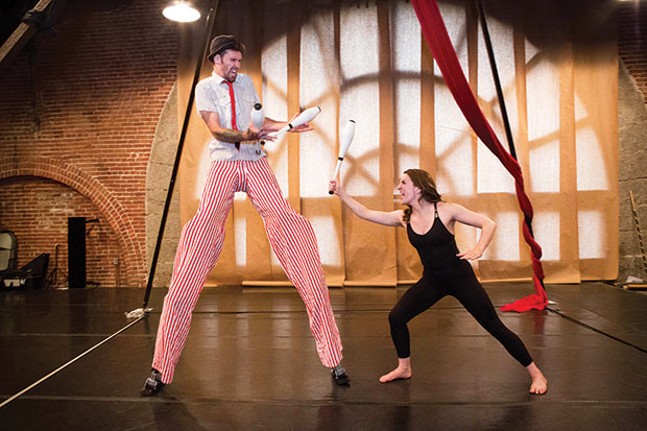 Have you seen the movie about a group of artsy high-school friends reuniting years later to put on a show? Double Blind Productions’ Escape Velocity is a lot like it.

“During high school, a few of us spent a lot of time late at night at Eat’n Park reading tarot together,” says Moriah Ella Mason, a collaborator with Double Blind.

Those glory days inspired Mason, along with Mandy and Jack Hackman, to create a deck of circus-themed tarot cards in 2015. Inspiration struck again for the creation of their joint production, Escape Velocity.

Featuring an interdisciplinary performance collective comprised mostly of Penn-Trafford High School graduates, Escape Velocity is a semi-immersive, multimedia work being staged at New Hazlett Theatre on May 31. Part of the CSA Performance Series, it is billed as a “circus arcana” that features a blend of dance, music and circus arts such as juggling, stilts, clowning, aerial skills and lyra.

Mason, the director, guides a narrative established by Angela Whalen, the story and script coordinator. It is derived from characters seen in the Hackman’s tarot deck.

Double Blind’s creative team was interested in using a circus motif from a historical perspective. The circus helped form American popular culture in the 19th and 20th centuries, and the team sees circus culture as a metaphor for societal power structures and spectacle. Escape Velocity plays into those themes as it follows a group of performers led by a controlling ringmaster (Miles Wilder) and a group of eight characters trapped in a circus.

A 90-minute production, it is performed to original, pre-recorded and live music by played Wilder. Featured performers are from Pittsburgh, Colorado, and New York, and include O’Ryan “the O’Mazing” Arrowroot, Roberta Guido and the Bombyx Collective.

Audience participation is an integral part of the show.

“The key thing to know is that there is more than one ending to the show and which ending will occur depends on a drawing from the tarot deck done with audience and choices the audience makes throughout the performance,” says Mason.

“People coming should be prepared to be interacted with, and those interactions are really meaningful to the outcome of the show.”