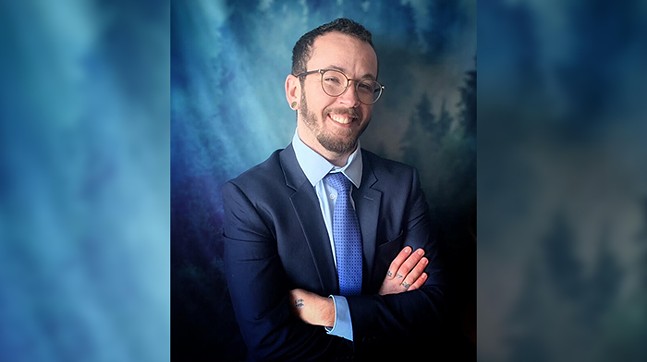 Photo: courtesy the campaign
Tyler Titus
With a win in the Erie County Democratic primary election on Tuesday night, Tyler Titus could become the first openly transgender person in the United States to serve as a county executive.

Titus, a mental health professional and small business owner, emerged victorious with 32% of the vote in the four-way race, according to unofficial results — which show a 208-vote margin.

“This victory belongs to the people of Erie County who know we need new leadership to build a prosperous future for all of us,” Titus said in a statement. “From investing in our schools and infrastructure to expanding broadband access and creating good-paying jobs across the county, it’s time to unite and deliver results for families across Erie County.”

Titus previously made history when they were elected to the Erie School Board in 2017; they serve as president.

Titus said they know what it’s like to struggle and “to be failed by government.” They have worked at the Erie County Office of Children and Youth as a full-time therapist for foster children and campaigned on a promise to deliver quality education for kids and create a safe community.

“That’s what our campaign has been about since day one and will be through the General Election, and those are the priorities I will deliver on as Erie County executive,” they said.

They congratulated candidates Carl Anderson, Rita Bishop and Dylanna Grasinger on their campaigns and added that they look forward to working with them on community issues.

“As a small business owner and as president of the Erie County School Board, I’ve seen how investing in our small businesses and our local schools are the key to our economic future. It’s imperative that we build back from this pandemic in a way that puts our families and communities first.”

Titus will face Republican Brenton Davis in the November General Election.
Marley Parish is a reporter with the Pennsylvania Capital-Star where this story first appeared.