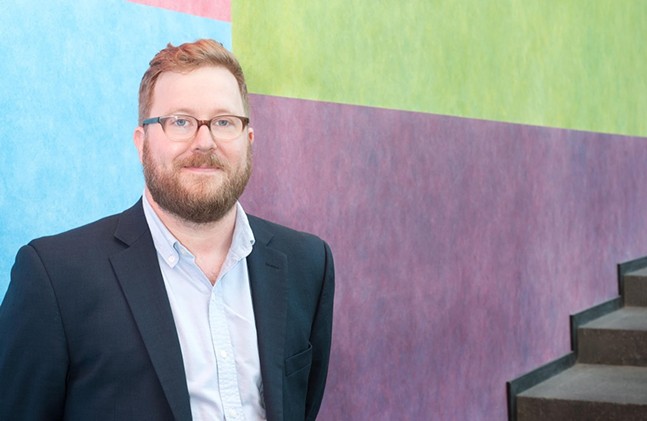 The Carnegie Museums of Pittsburgh made the announcement on Thursday, adding that Crosby will officially assume his role as director starting March 1. Crosby was the Richard Armstrong Senior Curator of Modern and Contemporary at CMOA and became the museum’s acting director in January 2019.

“Eric has a deep commitment to the mission of Carnegie Museums and a clear understanding of what it will take to build on the distinctive strengths of Carnegie Museum of Art,” says Steve Knapp, president and CEO of Carnegie Museums of Pittsburgh, in a press release. “He was widely recognized as a creative and insightful curator before becoming acting director, and over the past year, he has proven his ability to lead the museum’s talented staff as they lay the groundwork for the museum’s future. I look forward to supporting his efforts and benefiting from his advice in the months and years to come.”

Crosby came to CMOA in 2015 after serving as the associate curator of visual arts at the Walker Art Center in Minneapolis, Minn. Over time, he organized the collaborative exhibition 20/20: The Studio Museum in Harlem and Carnegie Museum of Art and managed the museum’s Forum series, which presented a number of emerging and established artists like abstract painter Ruth Root. His curatorial work added a series of acquisitions to the museum’s collection, such as Kerry James Marshall’s Untitled (Gallery) (2016), Joan Brown’s The Room, Part 1 (1975), and major works from the 2018 Carnegie International, 57th Edition by the British painter Lynette Yiadom-Boakye, the interdisciplinary collective  Postcommodity, and Pittsburgh sculptor Thaddeus Mosley.

Prior to the opening of Carnegie International, Crosby also oversaw a complete transformation of the museum’s postwar and contemporary galleries, Crossroads: 1945 to Now.

“Eric has such passion for the museum, the city of Pittsburgh, and the greater arts community,” said Ellen Kessler, a Carnegie Museums life trustee and chair of the CMOA advisory board. “He has proven to be an inspiring and engaging leader, and our advisory board is excited to continue working with and supporting Eric and his team as they lead the museum forward.”

The move comes just over a month after CMOA announced four new additions to the museum’s senior leadership team in anticipation of its 125th-anniversary celebration later this year and its 2022 Carnegie International.

Crosby was described as being “instrumental in reimagining the museum’s artistic program, in particular as the museum prepares for the next iteration of the Carnegie International, which will launch in 2022.”

Crosby says he is “deeply honored” to take on his new role, adding, “For nearly 125 years, the museum has presented significant artworks from across the globe and inspired visitors through its exhibitions and collections as well as through the
Carnegie International, the oldest and most prestigious survey of contemporary art in the United States. In this new chapter, I will continue to champion curatorial projects and educational initiatives that provoke critical conversations about our world and respond to the key social issues of our time, driving forward our team’s desire to redefine the role of art museums in the 21st century.”

Speaking of Carnegie Museum Of Art