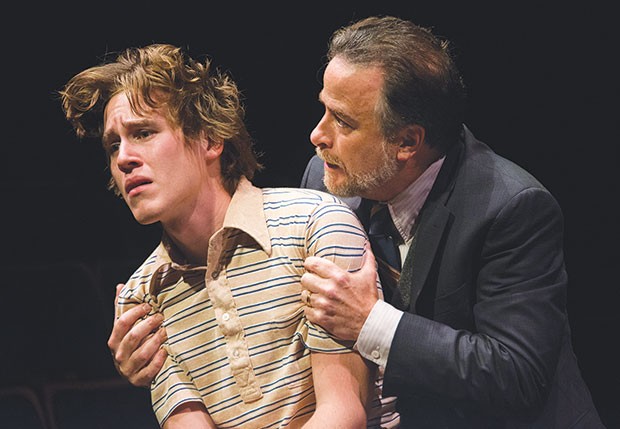 Forty-four years after its sensational debut, Peter Shaffer’s Equus has become antiquated and turgid, an old war horse of theatrics with a once-provocative denouement that can’t redeem it any more.

At least, not in the largely unmoving production at Pittsburgh Public Theater. The residual power of the play’s better moments never overcome the clichés of story and character, and Ted Pappas directs his actors to go big and loud when they can hope to absorb us only with an introspective whisper.

Set in mid-1970s England, with the accents to remind us, Equus chronicles the efforts of an effete middle-aged psychiatrist (Daniel Krell) to help a 17-year-old boy (Spencer T. Hamp) who has a fascination with horses, but who blinded six of them one night with a metal spike. Why did he do it? What painful secret is he hiding? If therapy, hypnosis and a little white pill can’t figure it out, then the poor lad is doomed. (Spoiler alert: He is anyway).

This may all have been startling to audiences in 1973, and it’s not hard to read homoeroticism into a play where a confused boy strokes the chest of his strapping co-star (Ben Blazer) and then mounts his back. But today, Equus feels like Freudian recidivism — the magical ability of psychiatry to save ordinary people. The boy’s father is a working-class atheist, his mother an educated believer. No wonder he mixes up God and horses. And his doctor — in a sexless marriage to a dentist (why do people laugh at the mention of that profession?) — has an exceedingly low sperm count, which I think may be a metaphor for something (someone get back to me on that).

The horses, of course, are legendarily portrayed by strutting actors outfitted with metal-frame heads and hooves, and even post-Lion King, that spectacle still provides some pleasure. But the play has no second act, except for its nudity-and-blinding scene: There’s nothing left to say as it thunders to a close, and yet, the doctor keeps talking until the blackout. Hamp, who’s beginning his career, shows promise when he’s allowed to go deep. He just needs to take on a more nuanced contemporary role that lets him be for real.

An Act of God at Pittsburgh Public Theater