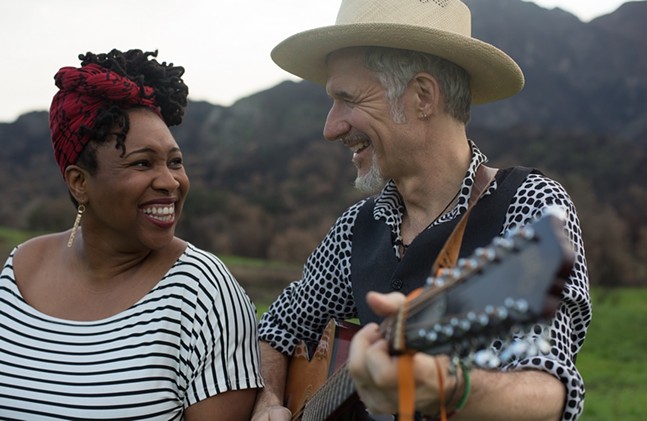 Photo: Lucy Friedman-Bell/Courtesy of the Pittsburgh Cultural Trust
EQT Children's Theater Festival performers Dan and Claudia Zanes
There are only so many episodes of PAW Patrol your homebound kid can watch before boredom sets in. Thankfully, the Pittsburgh Cultural Trust has another option this weekend with the latest online edition of the annual EQT Children's Theater Festival.

The digital festival will run from May 14-17, with a lineup of fun shows, interactive activities, and more. The popular event was moved online after the Trust announced it would cancel it due to concerns surrounding the COVID-19 outbreak. As opposed to taking place on the streets and in the performance spaces of Downtown Pittsburgh, the festival will unfold at the Trust's PGH Kids website.

“These are unprecedented times for our region, and a time when bringing meaningful and engaging arts experiences into the home are needed more than ever,” says Ellen Rossi, president of the EQT Foundation, which provides underwriting support for the event. “We applaud the Pittsburgh Cultural Trust for their innovation and resourcefulness to bring aspects of the annual Festival to our homes.”

Now in its 34th year, the festival will kick off with a special performance by Grammy Award-winning artists Dan and Claudia Zanes. From there, families will find over 40 free activities by local nonprofits and arts organizations, as well as free interactive shows and workshops with Arcade Comedy Theater, Sunburst School of Music, and more. Among the highlights is the virtual Frogstop Scavenger Hunt @ Home, an event that kicked off in late April and challenges participants to complete and document a number of online activities for a chance to win free milkshakes from The Milkshake Factory.

Also included are virtual experiences, such as storytimes with Citiparks Alphabet Trail & Tales and the Carnegie Library of Pittsburgh, exhibit tours at Heinz History Center, and sing-alongs with members of the Pittsburgh CLO Academy. Much like in previous years, the festival will feature sensory-friendly performances for children with autism or other sensitivities, including the interactive 360-degree video Up and Away by Trusty Sidekick Theater Company and several offerings from Jumping Jack Theater.

Families can also register for a limited number of free access codes to the New York International Children's Film Festival's Kids Flicks program, a showcase of kid-friendly short films from around the globe.

In an official letter, Pam Komar, director of the EQT Children’s Theater Festival, says that while the decision to cancel the physical festival was difficult, the Trust is still committed to bringing the arts to area families.

"Every year when designing the Festival, the team and I remain dedicated to continuing the tradition of world-class theater for children and this year is no different," says Komar. "In the past, the Festival has offered live performances from professional, international artists that engage children of all ages from different cultures and perspectives, showing them different ways to express ideas. This year’s Festival may not physically be the same but the importance of exposing children to the magic of arts and theater remains."