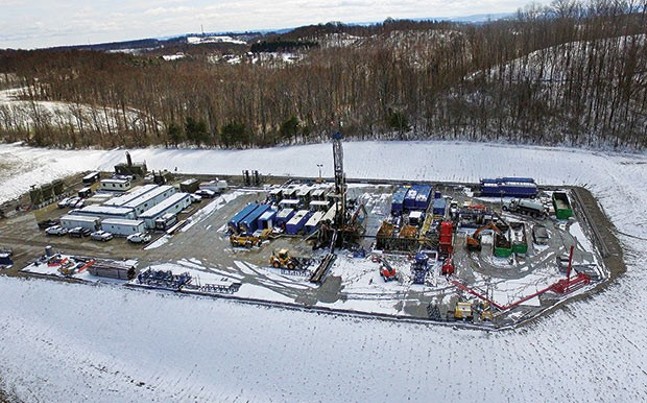 CP drone photo by Jake Mysliwczyk
A natural-gas well pad in Westmoreland County
In May, the Southwestern Pennsylvania Commission (SPC), which is responsible for funneling federal funds to address regional infrastructure needs, released a 25-year plan for the Pittsburgh area.

The plan, called “SmartMoves for a Changing Region,” included more money and bold visions for public transit, and mentioned how infrastructure changes could have a big impact in combating the effects of climate change.

But the SPC’s plan also supports the creation of an Appalachian Storage Hub (ASH) for natural gases and other petrochemical products, and environmental and anti-fossil fuel groups weren’t pleased. A collection of environmental groups announced Monday that they would stand together in disapproval of the SPC’s inclusion of these hubs in the proposal.

Twenty regional environmental groups, including the Breathe Project, the Group Against Smog and Pollution (GASP), and PennFuture, signed onto a critical letter addressed to the SPC. Matt Mehalik, the executive director of the Breathe Project, said in a news release that the existence of a storage hub would exacerbate climate change and have a harmful effect on public health.

“The ASH concept is a direct threat to our region’s ability to meet climate change goals, putting our community at risk and giving us a reputation as a destructive, world-wide climate polluter,” Mehalik said.

Currently, natural-gas drilling, or fracking, produces gas in the region that must be moved to established hubs in Texas and Canada for storage. Southwestern Pennsylvania is currently producing so much natural-gas that frackers must export large amounts of it, though the investment and financial results of that are still unclear. The plans say the ASH would support a pipeline, allowing the region’s natural gas to be kept at the storage hub and then processed at an ethane cracker plant like the one currently being built in Beaver County, where it will be turned into plastics.

A 2018 U.S. Department of Energy study recommended the construction of a plant in the eastern United States to support the region’s natural gas industry, which is expected to grow rapidly over the next 30 years. While the Gulf Coast has historically dominated the country’s natural gas industry, the east, and Appalachia in particular, is projected to emerge as another hub.

The storage hubs and other facilities they would support have been projected to bring thousands of permanent jobs to the area, and is supported by SPC representatives in rural counties and the Allegheny Conference, a coalition of pro-business groups for the Pittsburgh region. But GASP program manager Sue Seppi said its long-term effects would keep the region stuck in the past.

"Support for the Appalachian Storage Hub, infrastructure, and associated facilities, is not a smart move in the long run," Seppi said. "It is a step backward, holding us in a less sustainable place than what could have been."

Natural-gas drilling produces large emissions of methane, a greenhouse gas that warms the planet 86 times as much as carbon dioxide, according to the Intergovernmental Panel on Climate Change.

Bike Pittsburgh executive director Scott Bricker sits on the SPC Board and was part of a group of members that criticized the ASH inclusion at the board meeting on Monday. He says he supports most of the SPC plan, but that all the environmental benefits of the plan will be wiped out if there is also institutional support to up natural-gas production and related industrial facilities in the area.

“All the headway we are making in cutting pollution in the transportation sector would be completely eliminated by building these plants,” says Bricker. “There were a lot of impassioned pleas to remove that part of the plan.”

Rachel Belloma, spokesperson for state Rep. Sara Innamorato (D-Lawrenceville), spoke at the SPC meeting on behalf of the representative alleging the ASH was contradicting the climate-change coals of the overall plan.

“You cannot address climate change and court petrochemical investment simultaneously," said Belloma. "These are inherently contradictory goals. At a time when the United Nation’s Intergovernmental Panel on Climate Change is warning that we have only 12 years to address our climate crisis, this strategy supported by the SPC would move our region in precisely the wrong direction.”


Passionate testimony given 2nite by ppl repping 25+ enviroorgs & @RepInnamorato at @spcregion commission meeting–lauding the MPO for addressing climate change, air/water quality, transit/bike/walk, but panning the LRP for advocating for our region to America's next PetroChem Hub.


Bricker says he understands the dilemma of providing well-paying jobs in rural areas of the region, but long-term, he wants to see cleaner industries supply those, through wind power or tourism. He cites the economic success of some towns along the Great Allegheny Passage bike trail. He says those industries can provide a better vision for the region, one with less pollution.

“There needs to be hope and well-paying jobs,” says Bricker. “I am not trying to dictate what they can and can't do, I’m just trying to offer a more hopeful vision for our region.”

Bricker brought up an amendment to strike the ASH proposal from the SPC plan, but it only received four votes when it needed 16 to pass. In the end, he wished there was a bit more debate about the ASH proposal before he was decided by a final vote at the SPC meeting.

“I think we had a pretty good process for this long-range plan,” says Bricker, reference the “SmartMoves for a Changing Region” plan as a whole. “But we weren’t having long-range discussions on everything that was going in, like the natural-gas hub. We should be debating these things not at the time of the final vote.”