"We decided to stay right there in Wilkinsburg and set up shop." 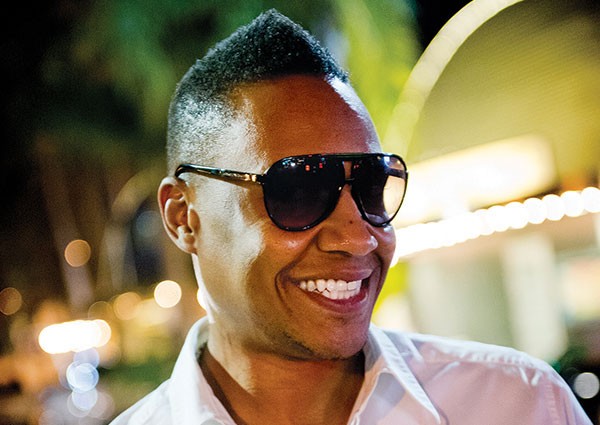 THE ENGLISH BEAT with THE HEAD.

For over a decade, Antonee First Class has toured with classic English ska band The English Beat as the group's toaster — but before that, the London-born artist spent much of the 1990s living in and around Pittsburgh. The budding solo artist — who recently released a full-length, Who You Are — talked with CP about his time here running a record store and label with his father, Jamaican-born musician Militant Barry.

How did you end up in Pittsburgh?

After I left school, England was going through a phase, which I figure my mum and dad could see, and they were going to leave. With me just leaving school, I'm a big grown man, mum and dad leaving England, I'm about to take my music all the way now. It took them about a year for the paperwork to go through, and I was ripping and running, doing the usual young-guy stuff. Then I said to myself, "You know what? I can get a free vacation to America! Why don't I go for three months? I've seen it on TV and all." So I decided, I'm going. Stopped in New York: Everybody is there, got people 20 years ahead of me there. My grandma, etc., are in Pittsburgh; my mum and dad decided to go to Pittsburgh and I followed them. I was around 18 or 19 — 1989, '90, around there. That's where it all started.

And you ran a record shop?

Me and my dad. My dad's a musician, a reggae artist, producer. Everything I have, I've gotta give him the credit. We were first working with a guy in Wilkinsburg who had a shop called Slate, then he moved on and we decided to stay right there in Wilkinsburg and set up shop, open a record store, DJ with a big full sound system, promotion of concerts. It was me and him that did the store together. That was about 10 years straight.

What was the atmosphere here like for that kind of music?

When I first came to Pittsburgh, it was like, more the live instruments, roots, versus the dance hall. They had a few Pittsburgh bands, like Chill Factor and The Flow Band: I used to go wherever they'd play, and we'd go up and toast, MC, rap with them. At that time, there were two kinds of reggae people: There was the people who knew reggae from Bob Marley, and there was the guys from the so-called "'hood," who heard reggae but didn't know it that well. And those guys liked the DJs. We came with the Jamaican sound system: two turntables, big speaker, amplifier, whatever. And we used to just play music off that, to the urban crowd. And at the same time, we was rapping and toasting over the instrumentals on the records we was playing. You still got that, even with the DJ.

There's a Jamaican community in Pittsburgh. A lot of it is underground. That's where we mainly stayed. There was restaurants, record stores at the time, there's DJs, everything.

Was your dad out touring a lot when you were young?

Oh yeah. And besides his music, he was road-managing for a lot of touring artists. He was out as much as I'm out.

And you knew from a young age that this was the life for you.

Oh yeah. My house in England — it was like what Bob Marley had in Jamaica. Musicians in and out; my closet in my own bedroom was filled with records that was being sold.

Are you parents still around Pittsburgh?

Yeah, we frequent the area. Mum and Dad are in and out. You'll probably see my dad; he's a big, 6-foot-tall Rasta man. You'll see him somewhere in Pittsburgh. I've got many family in Pittsburgh. Of all the places I get to, Pittsburgh is my home away from home.

When did you hook in with Dave Wakeling and The English Beat?

It was probably about the middle of 2000. He had a show in New York, and I was living there at that point. But you know what? Before that — Dave had a show in Pittsburgh, and it was called "The English Beat" — it was at the one next to Metropol back in those days. But in England they were called The Beat. So I saw it in the City Paper and I thought, "What kind of band is this? They've got the same logo, this ain't the band!" So I didn't even go to the show. Then while in New York, I seen a flier again, same logo, and I thought, "I gotta go see this band. They're not the real thing, they're making a run for it." So I went to the show, then after I seen Dave Wakeling singing, I said, "What?" But he didn't have a toaster at the time. And I knew all of those guys, Ranking Roger and them, from a kid growing up in England. I went and spoke to Dave: I said, "Dave, you're doing your thing, but you know you need your toaster up there." Plus my dad had contacted him before, I believe. But that's how it happened — a couple weeks later, he was playing in New Jersey, he threw me on stage. After that, we was on tour.