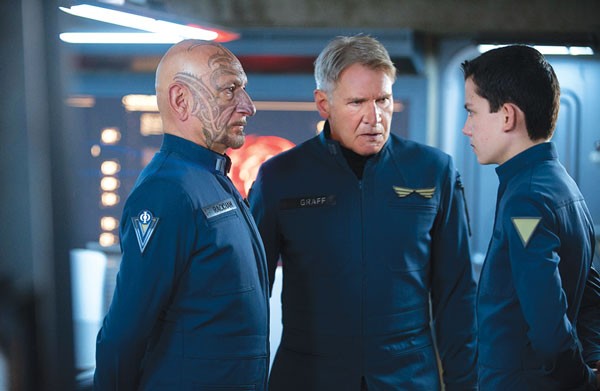 Gavin Hood directs this effects-heavy adaptation of Orson Scott Card's science-fiction adventure, in which children are trained to fight insect-like invaders. Most of the story focuses on Ender (Asa Butterfield), a tween with a gift for military strategy, and his somewhat bumpy education. His primary tutor is a gruff, no-nonsense sort (Harrison Ford), but he has trickier lessons to learn from a mysterious military hero (Ben Kingsley).

The grooming of child soldiers is a provocative premise that isn't explored as deeply as I'd prefer (unless that happens in the sequel, which this film sets up). Sure, kids might be better at videogaming, but leadership and strategy aren't exactly the strong suit of adolescents. Just look at all the petty (typically teen-age) bullshit going on in the dorms! Even more than when the novel was written in 1985, the ethics of fighting a war by remote control is very much worth exploring in the Age of Drones. But mostly Ender's Game just fires a lot of weapons and clichés at the issue.