Encounters at the End of the World

Filmmaker Werner Herzog finds ice, and not much else, in Antarctica

Werner Herzog will not be happy unless he dies in front of the camera, making one of his own films. He's scaled volcanoes, then apologized when they didn't erupt onto him. He's hauled a boat over a mountain. He's threatened an actor with a gun that had two bullets, one for each of them.

Now, he's gone to the Antarctic to make Encounters at the End of the World, a documentary that at times feels like a parody of his canon.

His film opens with a scene of a diver under the ice, an image -- shot by a friend of his -- that made him want to make this film. The music on the soundtrack is a chant that's almost a dirge. "Who are the people I was going to meet in Antarctica at the end of the world?" he asks in his lugubrious voiceover narration. "What are their dreams?"

Well, no mystery on point one: They're scientists, because so far, no one has built a resort on Earth's southern chunk of ice. (Who would want to, now that we have Dubai?) As for their dreams, I suppose that going to the edge of nowhere would make anyone a philosopher, although becoming one doesn't require you to go there. ("Merci dieu!" -- A. Camus.) Why, Herzog ponders, do people put on masks (insert image of The Lone Ranger)? Why don't chimps ride goats? Welcome to an artist's enquiring mind.

This is bad writing, and it gets worse: "We flew into the unknown, a seemingly endless void." Unknown? Maybe to him. Scientists have explored Antarctica for decades, and it's pretty thoroughly mapped. A few years ago a friend of mine spent 10 days there. He came home uninjured, and now he lives in Spanish Harlem. I'll have to ask him which is less hospitable.

As Encounters goes on, there are tidbits of information and ample beauty -- call it National Geographic Lite -- but nothing to mute Herzog's bloated observations and ridiculous queries. His talking heads share anecdotes, and Herzog tries desperately to make them sound as perilous as possible. Throughout his career, he has reveled in stories -- like his superb previous documentary, Grizzly Man -- about horrible ways to live and die. He seeks extremists, and he more or less preordains that the act of going to Antarctica makes you one.

"Is this a great moment?" Herzog asks when a scientist reports that he's found three new species. The scientist is quizzically silent for a moment before giving Herzog the answer that he's already telegraphed.

Of course, Herzog has a message: He wants to globally warm our hearts. Antarctica is "a living being producing change that it's broadcasting to the world," a glaciologist says, "possibly in response to what the world is broadcasting down to Antarctica." And a Latino descendant of Aztec royalty, with the oddly shaped fingers to prove it, tells us: "Be aware of global warming. It's real. I'm a green person."

There are some baby seals in Encounters, along with some penguins, and Herzog is clearly disappointed when a scientist can't confirm the presence of either homosexuality or insanity among them. He's much happier when one disoriented penguin wanders off from the pack to certain death. Unfortunately, no human dies for Herzog. Sorry to ruin the ending -- and, from Herzog's point of view, probably his film. 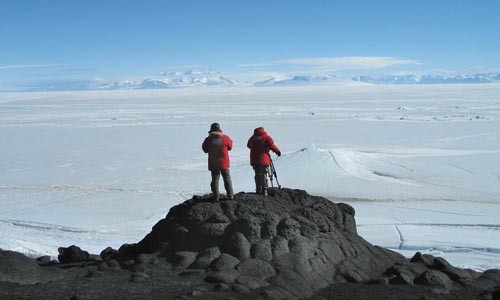 At the top of the bottom of the world: Director Werner Herzog and cinematographer Peter Zeitlinger survey Antarctica.