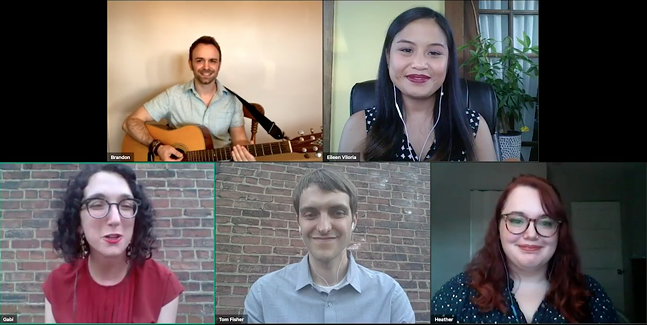 Screenshot of the UMW virtual rally announcing the union
On Monday, around 500 museum workers from all four Carnegie museums in Pittsburgh announced they are beginning efforts to form a union as the United Museum Workers (UMW). The workers from the Carnegie Museum of Art, Carnegie Museum of Natural History, Carnegie Science Center, and The Andy Warhol Museum announced plans to organize with the United Steelworkers (USW) at a virtual rally on Monday evening.

The announcement came the same day that the Carnegie museums reopened to the public. In mid-March, when the pandemic hit, Carnegie museums announced they would be closing, and around 550 staff members would be furloughed.

Employees of the Carnegie museums began working to unionize about eight months ago. During the virtual rally, members of the organizing committee explained why they wanted to improve their workplace conditions and ensure a better future for their jobs.

"Although working at a prestigious, mission-driven nonprofit is often a labor of love, many of us struggle to make ends meet while the organization relies on our dedication, long hours, and other sacrifices," said Gabie DiDonna, assistant registrar for loans and exhibitions at Carnegie Museums of Pittsburgh, during the rally. "Museum and cultural workers deserve a sustainable way to make a living."

Eileen Viloria, a youth programs coordinator at the Warhol Museum, spoke about how as a full-time, grant-funded employee, she had to take on a heavier workload as many of her coworkers were furloughed, but she didn't receive more pay. Tom Fisher, a multimedia producer at Carnegie Museum of Art, recalled how on his way out of the building after closures were announced, he ran into an employee from Carnegie Library of Pittsburgh and asked her about their union.

In video compilations, museum employees signed their UMW cards while stating why they wanted to join a union. There were also videos of other Pittsburghers, from USW members to students, voicing their support for the union. The New Museum in New York, whose workers unionized in 2019, offered a statement of support.

Heather Nilson, operations coordinator at Carnegie Science Center, came on board with the union's organizing as the museums were closing. She was furloughed and says that within the museums, "decisions were made while staff were furloughed that directly affect the furloughed staff without us having a voice in the decision making process."

She says one of the reasons she joined the organizing committee was because she felt there was a lack of communication and transparency at her workplace, and that she wanted to make sure workers were safe as the museum reopens while cases continue to rise in Allegheny County. Multiple employees brought up the museum's future amid the continued pandemic during the rally.

"It is critical that institutions prioritize and protect those who are most vulnerable while centering accessibility and equity while making decisions about resuming operations," said DiDonna during the rally.

Right now, organizers are gathering union cards and a union hasn't been formed. If they receive enough signed union cards, then the bargaining unit can vote on whether or not to form a union.