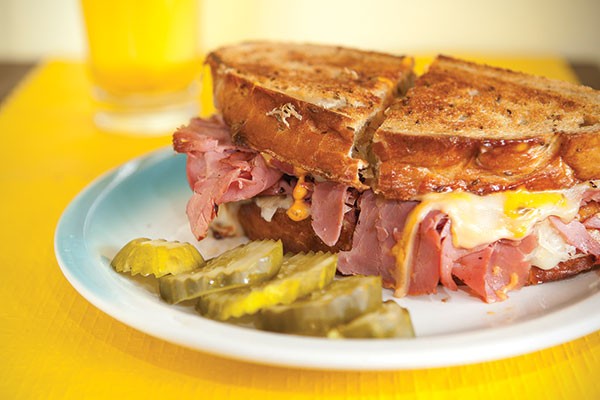 We've all heard tales of Pittsburgh's heyday, when the mills cranked out steel all day and local businesses prospered on the paychecks of the workers who made such productivity possible. Some may have their own memories of that time; the rest of us have Emil's.

Emil's — named after its founder, Emil Luzaich, who ran the restaurant from his seat at the bar from the 1950s till his death in 2009 — is located in the first floor of a two-story building in Rankin. Windowless and nondescript indoors and out, it's reminiscent of any number of local bars found throughout the Mon Valley: Regulars no doubt anticipate the warm camaraderie waiting within, but to outsiders, its inscrutable facade suggests a private clubhouse.

But Emil's isn't a smoky bar to while away the hours until closing time — or, if it were, you'd still get home in time for Wheel of Fortune. With operating hours that only stretch past 7 p.m. once a week (that would be 8 p.m. on Fridays), if you want to partake of Emil's old-school experience, you may have to leave work a little early.

Inside Emil's, two little dining rooms flank a big, asymmetrical bar, and decor consists of some paneling, mirrors and a few seasonal tchotchkes. Plastic picnic tablecloths and paper placemats, too, were in seasonal earth tones. The bright lighting conspired with the limited decor to suggest a family night out, rather than a working man's local.

The menu, split between diner-style sandwiches and surf and/or turf entrees, is another relic from a bygone era. Emil's daughter, Krissy Kochis, who now runs the restaurant, calls it "hunky" food, meaning meals that would satisfy a hungry laborer: steak, calf liver, steamed shrimp. On Fridays, there's prime rib, and Thursday — Italian night — means spaghetti or rigatoni with meatballs or hot sausage, meatball or sausage hoagies, and chicken "parm."

The chicken parm certainly sounded enticing to us. Our server warned us that the portion was big, and she wasn't kidding. Instead of a cutlet, or even a couple of cutlets, here were two enormous breasts of chicken, their breading overwhelmed by the meat and a thick blanket of melted cheese, plus enough sauce to hold the flavors together. Jason, our resident parm partisan, missed a good crust, but the chicken was tender and juicy, and it was hard to argue with all that melted cheese. A side bowl of rigatoni in a dark red sauce was forgettable, however.

On the sandwich side, Emil's is especially proud of its fried fish and reuben. No one in our party was up for a pound of fried cod, but Jason ordered the reuben, which appeared to contain about a pound of corned beef. Texas-toast-size slices of marble rye, nicely browned, were sufficient to the task, but the bottom piece quickly grew soggy beneath the meat, sauerkraut, dressing and gooey floes of molten Swiss. The corned beef was round cut, rather than the more finely grained brisket, but, despite relatively thick slicing, it was tender. We would have liked more kraut to balance things out.

Since prime rib was not available on a Thursday, we tried instead to get our beef fix from a New York strip. The slab of meat we were served was easily a few inches thick. It was only a touch less than the medium rare we ordered, but while the top was a lovely brown, the too-brief cooking came at the expense of an adequate crust on the other side. The lack of char led directly to a lack of flavor. We ameliorated this somewhat with salt at the table, but we wished it had been properly seasoned by the kitchen. 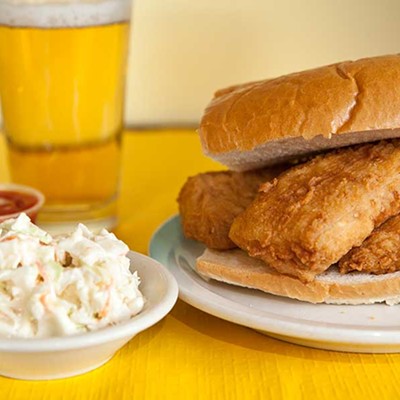 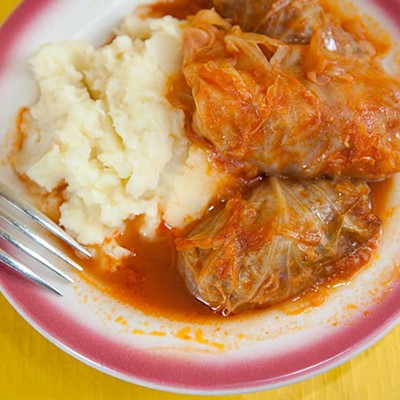 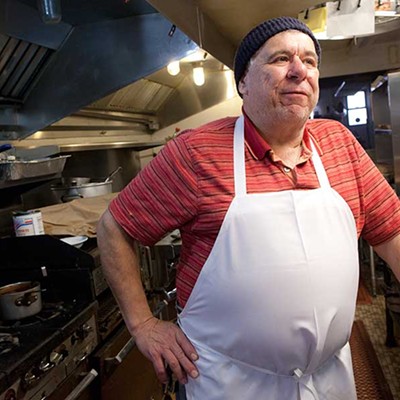 Onion rings were well above average, great big slabs of juicy onion coated not in batter, but in a light breading. Breaded rings tend to trade big crunch for satisfying onion, but Emil's provided both. Jason found the fries unexceptional, but Angelique thought they, too, had good, crispy crusts outside and nicely contrasting, creamy interiors.

A similar description applied to the crab patties. These were not the same as crab cakes, but more like croquettes, with a crispy fried coating on the outside and a mashed-potato-like filling inside. Though lacking much crab flavor, they were mildly pleasant to eat.

Ultimately, though the flavors at Emil's weren't exciting, that wasn't the most important thing about the place. What impressed us most was the connection to a disappearing part of local culture, when a hearty life demanded a hearty meal.