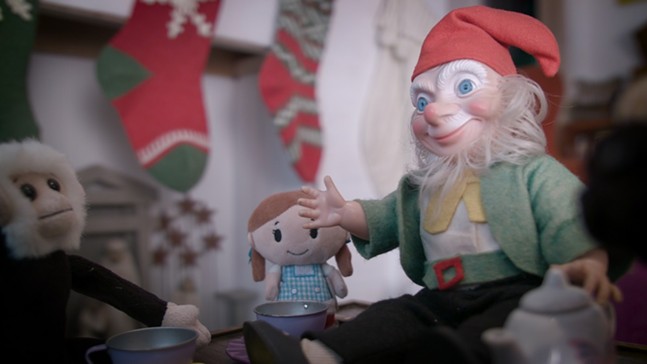 Proof of concept doll for The Elf in the Room
As if Elf on the Shelf wasn’t disturbing enough, with its sly permanent smile and unblinking gaze, a team of Pittsburgh filmmakers intends on making it even weirder.

The upcoming horror short The Elf in the Room puts a creepy spin on the already questionable holiday tradition of convincing children they are constantly under the surveillance of a dead-eyed toy. Described as a “twisted but cautionary psychological thriller,” the film wonders what would happen if the elf really was watching and had the ability to teach naughty kids a lesson.

Created by director Darin DiNapoli, writer Jonathan Joseph, and producer Amanda Williams, The Elf in the Room also plays with the folklore of its diminutive magical subject.

To ramp up the creep factor, the team brought on Pittsburgh-based doll maker Rafael Nuri to design and craft the movie’s elf doll. DiNapoli says the doll will have “five distinct heads that will feature different looks which will change subtly throughout the film.”

The Elf in the Room doll in progress
A fairly new tradition, the trademarked Elf on the Shelf dates back to 2005 when author Carol Aebersold caused a sensation with the story of an elf sent by Santa to report on children's behavior. The now-famous toy elf sold with her book has taken up residence in thousands of homes along with a set of strict, totally normal rules.

If, for example, a child should touch the elf, which is forbidden, the child has to partake in a set of rituals, including writing an apology to Santa for touching his elf and sprinkling cinnamon on the elf. (No joke, this is on the Elf on the Shelf website).

The team launched an Indiegogo crowdfunding campaign to raise $10,000 for the film, which is set to be shot and produced in Pittsburgh. If all goes well, The Elf in the Room is slated to release fall of 2019.