Electrelane performs at the Warhol 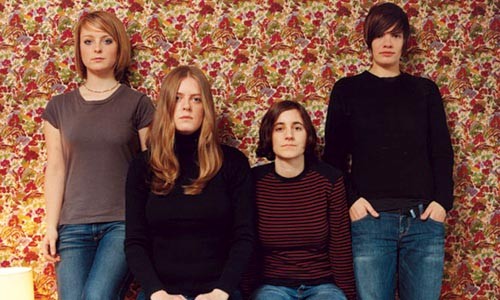 No calls, please: Electrelane
The ladies are taking over. More specifically, a lady-rock tour headlined by Electrelane, an indie-pop quartet from Brighton, England who have reaped quite a bounty of critical acclaim.

Some have anointed Electrelane as natural heirs to Sleater-Kinney's throne, although it doesn't really sound that similar. Where S-K mined tinny post-punk like Wire and Mission of Burma, Electrelane is more akin to krautrock and its successor, Stereolab. This is due to the insistent drumming of Electrelane's Emma Gaze and the droning Farfisa organ of Verity Susman, as well as her sweetly dueling vocals with guitarist Mia Clarke.

But like Sleater-Kinney, the members of Electrelane have been known to voice staunchly progressive political views, though more so in interviews than in song lyrics. They've also kept company with Dutch political art-punkers The Ex and feminist electro-icons Le Tigre on tour, and covered "The Partisan" (a song about the French Resistance). The women are worldly, as well: Electrelane's second album The Power Out includes lyrics in French, Spanish and German, quite a change from the band's largely instrumental debut. The new fourth album, No Shouts, No Calls, starts out with pop gems "The Greater Times" and "To the East" (which sounds suspiciously like OMD's "Telegraph"), then branches out into a mellower, melancholic vein on "In Berlin."

Electrelane appears at The Warhol this week with two K Records bands: electro-pop duo The Blow, fronted by the charismatic Khaela Maricich with expert programming by Jona Bechtolt, and Tender Forever, an emotionally gripping Bordeaux chanteuse who's been out on the road with Ted Leo.

It's definitely ladies' night out -- oh, and Verity, in case you're reading this: My mom still wants me to find a nice Jewish girl.