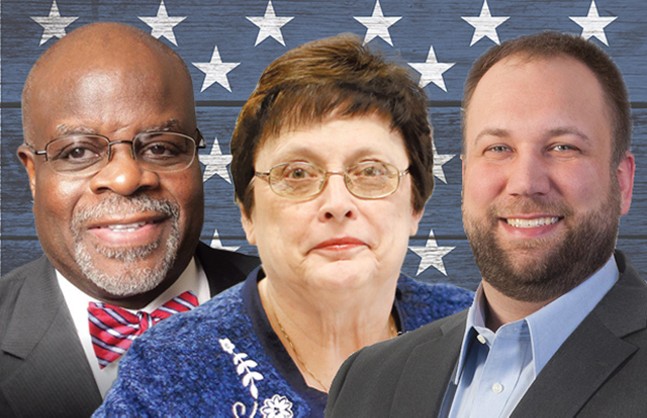 Bio: Lives in Allegheny Center and served as a Pittsburgh Public School board director for 16 years, up until 2015. Says his many years of elected office is the most important thing that voters should know about him. “I am experienced and dedicated to all tax payers in District 1.”

Development: If elected, would kick off a 90-day listening tour to hear district residents’ concerns regarding development. Says he would support new development in the district and keep the community informed but didn’t specify what kind of development.

Taxing Large Nonprofits: Says he would explore a more aggressive approach to getting nonprofits to pay their “fair share of taxes.” Pittsburgh Mayor Peduto currently supports negotiations with large nonprofits, but those negotiations have been ongoing for several years without a result.

Endorsements: Says he has received backing from his family and friends.

Bio: Longtime incumbent District 1 city councilor who unsuccessfully challenged Peduto for mayor in 2017. One of Peduto’s biggest critics, Harris has a reputation for outlandish statements and has been the center of controversies regarding bike lanes and blocking some of her constituents on Facebook. Is frequently praised for responding quickly to some constituents’ district needs.

Development: Voted against the 1 percent increase in the city’s real-estate transfer tax to fill the $10 million affordable-housing trust fund. Didn’t respond to questions about her role or future role guiding development in District 1.

Taxing Large Nonprofits: One of only two dissenting votes against UPMC’s expansion plan in 2018. Harris said UPMC's refusal to accept Highmark insurance factored into her vote. In the past was supportive of an aggressive push to get large nonprofits to pay city taxes, but didn’t respond to questions asking where she stands now.

Bio: A fifth-generation North Sider who's run for this seat two previous times. Lives in Spring Hill and works as a researcher at the University of Pittsburgh. Says raising his children in the North Side has helped him “see new opportunities for improvement and innovation to secure a strong future for all Pittsburghers.”

Development: Says he is committed to “community-led growth and revitalization that helps the North Side meet its full potential.” Wants to improve the District relationships between neighborhoods, developers, and city council to bring responsible development, especially to neighborhoods that have the greatest needs.

Taxing Large Nonprofits: Says that UPMC “must pay their fair share” and would work with council and the mayor to ensure large nonprofits give back more the Pittsburgh. Didn’t indicate if he supports the mayor’s negotiation tactics or a more aggressive approach.