"It's crazy to think about how far we've come from where we were." 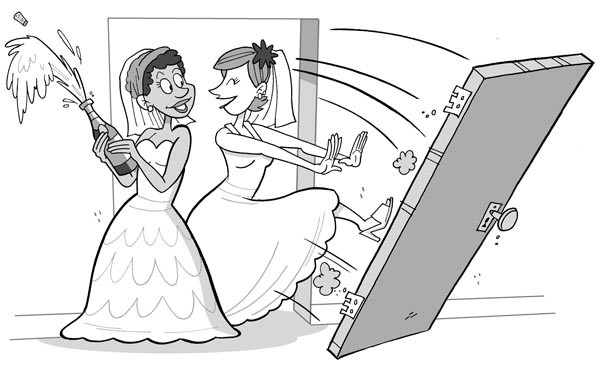 When my wife and I decided to have a wedding, my only hang-up lay with the venue we chose for the festivities. The site itself was beautiful — a lawn overlooking New York's Canandaigua Lake — but it was also in full view of the lodge's restaurant. I imagined that, as my fiancée and I pledged our lifelong commitment to each other, someone in golf pants would grab a drink at the bar, and say something. Or worse, simply stare.

But no one complained. Diners in the restaurant were watching as we exchanged vows, but the only ones who spoke to us offered their congratulations. The lodge's staff proudly informed us that ours was the first legal gay marriage they'd hosted. For weeks, my spouse and I had been dealing with fallout from relatives who could not support our wedding for religious reasons. But that response was dwarfed by the overwhelming support of family and friends who came to celebrate the day with us.

In fact, the only ill words we received all day were from a herd of golfers — and I think they were only upset because my wife and I nearly collided with their golf cart.

It was hard not be reminded of our wedding this Election Day. There had been so much struggle — for respect, for recognition — leading up to both occasions. And then, when the day finally arrived, society proved much more welcoming than we could ever have hoped.

Nov. 6 has been called a "banner day" for LGBT rights. In the four states that held referenda on same-sex marriage rights, marriage equality won each time. Voters in Wisconsin elected an openly gay senator, Tammy Baldwin. President Barack Obama — who'd expressed support for same-sex marriage during the campaign — mentioned the LGBT community in his victory speech.

"The speed [with] which people have moved has surprised even advocates," says Lanae Erickson Hatalsky, director of social policy and politics for the moderate think-tank Third Way. The organization's bipartisan Commitment Campaign seeks to persuade moderates to support gay marriage — a cause which now looks more achievable than ever.

Until Nov. 6, marriage had yet to win at the ballot box — after 32 chances. "It's crazy to think about how far we've come from where we were," Hatalsky says.

Part of this year's success stems from the way marriage-equality activists have learned to frame the issue.

In Minnesota, voters were faced with a ballot measure that, if approved, would amend the state's constitution to establish marriage as being between a man and a woman. (The state already had a law to that effect.)

"What we found in our research was that ... what resonated with [voters] was that marriage wasn't about rights," says Richard Carlbom, campaign manager for Minnesotans United for All Families. To voters, "marriage was about falling in love, making a commitment to the person you fall in love with and taking responsibility for each other."

MUFAF adopted a platform that framed the issue as being one about love, commitment and personal freedom, then a list of rights associated with it. One commercial showed photographs of gay veteran who was killed in the line of duty, with Republican legislator and veteran John Kriesel testifying before fellow lawmakers that he "cannot look at this picture and say, ‘Corporal, you were good enough to fight for your country and give your life, but you were not good enough to marry the person you love.'"

More than 700 organizations — including politicians, labor representatives and religious leaders — joined the MUFAF. The ground game there consisted of 18 months of interacting with voters at events like Pride and the Minnesota State Fair, and running TV ads. The effort raised $11 million and had 80 grassroots organizers and 14 offices around the state.

The tactics worked; voters defeated the amendment by 5 percentage points. And even though a ban on same-sex marriage is still in the statute books, preventing that ban from being enshrined in the state constitution signals a changing tide, Carlbom says. Democrats also took control of the state legislature on Nov. 6, which could open the door to future same-sex marriage laws.

"The conversation didn't end on election night," he says. "We really just began."

Advocates across the country have been using similar tactics, and observers say that may be making all the difference.

In a post-election report entitled The Big Shift, Third Way researchers found that support for same-sex marriage has risen 16 points since 2004 — and 75 percent of that growth can be attributed to people who once opposed marriage equality changing their minds. Even among conservatives, Hatalsky notes, support for marriage equality nearly doubled.

The road ahead will be long and winding, with advocates promising future battles for marriage equality at the state level. (Hatalsky says there is serious talk of putting the issue before lawmakers and/or voters in states including Rhode Island, Illinois, Oregon, Hawaii and Delaware. Pennsylvania, where polls showed only 45 percent of voters in support of marriage equality last year, is "pretty far away" she says.) And on Nov. 30, eyes will turn toward the Supreme Court, which will decide whether to hear cases challenging the constitutionality of Section 3 of the federal Defense of Marriage Act.

Passed in 1996, DOMA doesn't actually prohibit same-sex couples from marrying; that decision is left to states. But Section 3 of the law bars the federal government from recognizing such marriages for purpose of determining tax bills, health benefits or other rights and responsibilities straight couples take for granted. Another provision of the law ensures that states can't be forced to acknowledge such marriages either, even if they are consecrated just over the state line.

There are nearly a dozen cases related to DOMA floating around the legal system; two federal appeals courts have struck down the law so far. And it's not clear which of those cases, if any, the Supreme Court will hear.

Kate Paine, an attorney with Downtown firm Buchanan, Ingersoll and Rooney PC, who writes about DOMA issues for the firm's nontraditional-families blog, notes that because DOMA doesn't prevent same-sex couples from marrying, the court probably won't weigh in on whether prohibiting same-sex marriage is constitutional. Instead, she says, eyes will be trained on the level of review — or "scrutiny," in legalese — the court applies in determining Section 3's constitutionality. A stricter standard would make it very difficult for laws that discriminate against sexual orientation — at least within the context of marriage — to stand, Paine says. That could be important, she says, because it could set the tone for future court decisions.

"Yes, we want DOMA overturned," she says. "But more important in the fight to achieve marriage equality nationwide is the method the court uses to get there."

Either way, it's important for the court to speak, Paine says, as federal agencies are in limbo in states whose courts have pronounced Section 3 unconstitutional.

"The issue will not get resolved on a national level until the court speaks," Paine says. "If it doesn't decide, the momentum we're currently experiencing at the state level will likely reach a stopping point, and then you're going to have states doing completely different things."

Some LGBT activists question the amount of time and energy being spent on marriage rights, rather than on, say, anti-discrimination laws which would cover people of different sexual orientations and identities. Hatalsky says that she's often asked, "What good is it if we can be married, but we don't have protection against discrimination?"

Her answer: "It does matter what people say about marriage. For people who don't think about LGBT issues all the time, this is what they think about. If we can change their perception on that issue, it buoys the support of other civil-rights issues."

The fight for full-on acceptance of LGBT citizens is far from over. But the fact that the discussion has moved so far is something my wife and I are thankful for. Sept. 15 was the happiest day of our lives. And less than two months later, we saw much of what played out within our own homes — watching people shift their notions of what marriage really means — happen all across the nation.