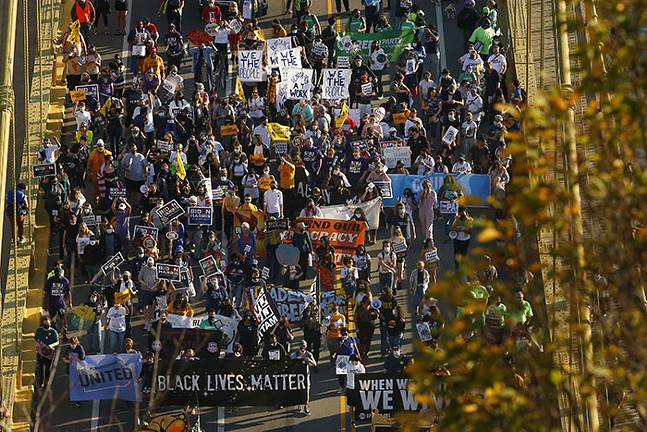 CP Photo: Jared Wickerham
Pittsburghers march across the 10th Street Bridge on their way from South Side to Downtown as part of Alliance for Police Accountability and PA United’s “Every Voice Heard, Every Voice Counted” celebration following Biden-Harris’ projected win on Sat., Nov. 7.
Allegheny County had some remarkable election results in 2020. Firstly, Joe Biden eclipsed 60% of the county’s vote, receiving a higher share of the presidential vote here than any Democrat since 1988. Allegheny County voters played a crucial role in flipping Pennsylvania away from President Donald Trump, which essentially secured Biden an Electoral College victory and the presidency.

At the same time, most Democrats down the ballot didn’t see the same success. Republicans in some statewide row offices and in local state legislative seats performed extremely well within Allegheny County. At least two Democrat-held legislative seats will flip to the Republicans, and the GOP held onto all of their closely contested state House races.

It’s unclear what exactly led to this result, but in many suburban areas where Democrats hoped to make inroads, only a few Democrats at the top of the ticket succeeded, like Biden, Pennsylvania Attorney General Josh Shapiro, and to a slightly lesser extent, U.S. Rep. Conor Lamb (D-Mt. Lebanon). All other Democrats in competitive local state House races fell short.

These are confusing times for the politically engaged, especially those in Allegheny County. Democrats are openly infighting on social media and in the news. Progressives are saying the failure to fully embrace and message around popular left-leaning policies was key to Democrats’ down-ballot failures. Moderates believe that loud slogans from progressive activists about policing, health care, and fracking kept would-be swing voters away from backing Democrats.

But no one can really say definitively. For one, most of these opinions were shared before all the votes were counted in Allegheny County and Pennsylvania. Secondly, this election had record-breaking turnout across the board; there is no actual comparison.

Lara Putnam is a University of Pittsburgh professor who studies Western Pennsylvania politics. She says people shouldn’t be making quick conclusions about this year’s election.

“The jury is absolutely still out,” says Putnam. “Everyone should be cautious of claiming victory for their own ideologies.” 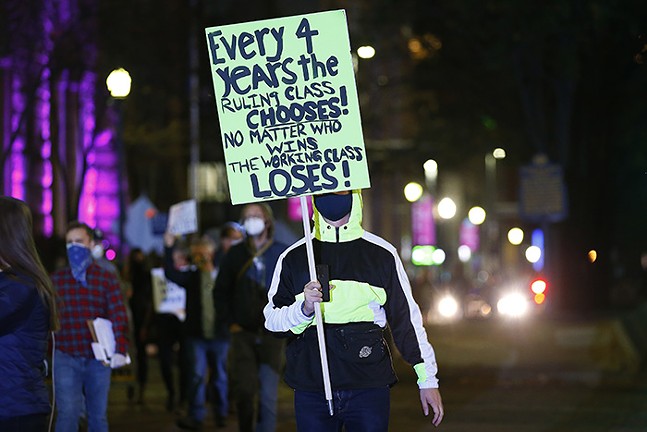 Voters in Allegheny County came out big for Joe Biden. The raw vote gains in Pennsylvania’s second largest county were near the top of any county in the state. In 2016, Hillary Clinton carried Allegheny County by about 107,000 votes. Biden carried it by more than 141,000. Biden received more than 415,000 votes in the county, and that will likely increase once the thousands of remaining ballots are finalized.

Putnam says across the state, and really across the country, Biden performed very well in wealthy suburbs that have been previously dominated by Republicans.

“At the top of the ticket, Joe Biden carried the upscale suburbs,” says Putnam.

This is true in Allegheny County, too. Biden flipped the upscale suburbs of McCandless, Franklin Park, Marshall, and Upper St. Clair. According to local election analyst Ben Forstate, this is the first time since at least 1964, and possibly ever, that Democrats have carried McCandless, Franklin Park, and Upper St. Clair in the same presidential election.

Biden also flipped Ohio Township, Ross, and Kilbuck Township. As all the remaining votes are eventually counted, there is a very good chance he flips Bethel Park and Shaler as well, according to Forstate.

It’s the suburbs that really led to this big victory for Biden. Forstate notes that thousands of provisional and late-arriving ballots still need to be counted, but as of Mon., Nov. 9, the city of Pittsburgh only increased its marginal vote share by less than half a percentage point for Biden compared to Clinton in 2016. The city’s vote still went for Biden by 78.8%, but didn’t see huge increases like many suburbs did, particularly in the North Hills.

As well as Biden did in these suburbs, those gains were not translated to other Democrats down the ballot. If they were, then Democrats would have likely picked up one or two seats in the state House and defended at least one other in the state Senate. Instead, the GOP defended their three most vulnerable state House seats, and will likely pick up a state House seat and a state Senate seat. Statewide, Republicans also won the Auditor General seat, and are ahead in the state Treasurer race. Republican Timothy DeFoor will become the first Black person ever elected to statewide row office with his Auditor General victory.

Forstate says the GOP’s down-ballot success is likely due to ticket-splitting, combined with impressive Republican turnout. (Biden might have increased the Democratic presidential margin of victory compared to 2016, but Trump actually received at least 15,000 more votes in Allegheny County in 2020 than he did in 2016.)

While Democrats' dreams of flipping the state legislature were dashed, Forstate says it is not all doom and gloom for liberals at the bottom of the ballot.

“We live in a 50-50 state, and Democrats basically held the line,” says Forstate, noting that they didn’t give up too many of their impressive gains from the 2018 cycle. Even though final votes could change things, it appears the Republicans will gain three seats in the state House to improve their majority to a 12-seat margin, and the state Senate will remain the same makeup.

“If there is any silver lining for down-ballot Democrats, it’s that they weren’t set back further in the House, and that the gains in the Philly suburbs from 2018 basically held,” says Forstate. Republicans picked up seats in Westmoreland County, Bucks County, Schuylkill County, and (very likely) the Allegheny-Kiski Valley. And Democrats flipped a seat in Montgomery County.

Additionally, while local Democratic challengers hoping to flip Republican seats came up short in Allegheny County, state House District 28 in the North Hills actually offers some positive signs for Democrats. In 2018, when Democratic turnout was high and Republican turnout was low, that district supported the Republican candidate by about a nine-point margin. This year, when both Democratic and Republican turnouts were high, HD-28 only supported the Republican by about seven points. In other local swing districts, Republicans pretty much increased their margins for state House races, but not in HD-28.

U.S. Rep. Lamb also held off a challenge from Republican Sean Parnell by about two points. His close race came as a surprise to many, and it became part of the fight between progressives and moderates about how to best message Democratic priorities. Moderates like Lamb said that the messages of left-wing activists around policing, health care, and fracking were a turnoff to swing voters in his district, while progressives said moderates’ poor performance were due to a lack of digital advertising around popular issues.

Putnam says the two sides are “talking past each other” and more analysis of election data and voter intentions are needed before any strong conclusions can be made about how to combat GOP down-ballot victories. “What are voters hearing about the candidates? And the parties?” says Putnam. “We don’t know those things yet.”

And while Lamb is slightly underperforming Biden in Allegheny County, he is slightly over-performing him in Beaver County. It’s currently too early to make any bold exclamation about why Lamb’s race was so close.

Regardless, Putnam says Pittsburgh-area Democrats have their work cut out for them.

“People here are unhappy with the state of the country,” says Putnam. “It looks like they held Donald Trump and the Democratic Party responsible.”

“Everyone should be cautious of claiming victory for their own ideologies.”

Even though Biden is getting all of the attention, the real bright spot for Pennsylvania Democrats is Josh Shapiro. The incumbent Attorney General and Democrat from Montgomery County completely dominated the electoral map, including Allegheny County. While Biden is likely to win by about one percentage point, Shapiro will likely win by about four points.

Sean Rankin is the Executive Director of the Democratic Attorneys General Association and a Shapiro booster. He says Shapiro’s focus on everyday issues is what helped propel him to an impressive victory.

“Just like in 2016, and the 2020 primary, AG Shapiro has received the most votes of anyone on the ballot,” says Rankin. “This is a testament to his bipartisan work on kitchen table issues that affect the entire Commonwealth. It’s why he did so well in Allegheny County, where his opponent is from.”

Shapiro has also taken to high-profile fights across the state and against some of Pennsylvania’s biggest private institutions. He released a grand jury report detailing decades of child abuse in Pennsylvania’s Catholic Diocese. Last year, Shapiro sued UPMC in hopes to force the health care giant to accept all insurance plans He also indicted natural-gas companies for polluting watersheds in Washington County and other parts of the state.

“AG Shapiro continues to show the people of Pennsylvania what leadership, compassion, and dedication look like in the office of Attorney General,” says Rankin. “With Josh Shapiro at the helm, Pennsylvanians have a steady, trusted leader.”

Shapiro has been criticized by some for using his elected office as a campaign tool, but voters didn’t seem to care. If anything, Shapiro might be providing a strategy for state Democrats to succeed in years when Republican turnout is high. And he did that while touching on issues like fracking and gun-control that other Democratic politicians in the state have been less likely to criticize.

“And over the past four years, AG Shapiro has been creating nearly endless opportunities to show Pennsylvanians his values and his moral code,” says Rankin. “People saw that and remembered when it came time to vote.”

Shapiro’s Allegheny County support looks a lot like Biden, except super-charged. While Biden will likely narrowly carry the once-Republican dominated Bethel Park, Shapiro won all but one district there. Shapiro also won the posh suburb of Hampton, while Biden didn’t. 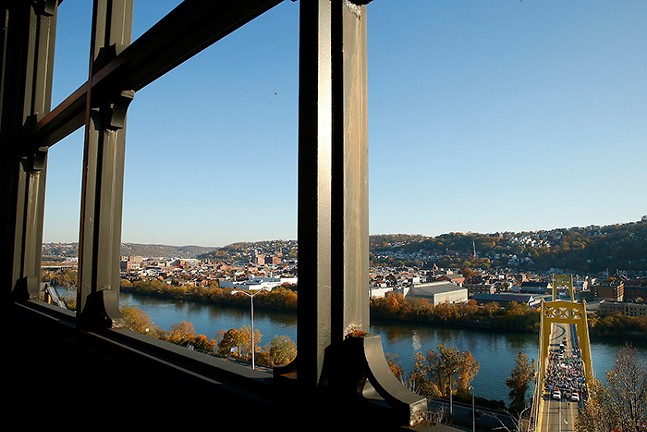 CP Photo: Jared Wickerham
Pittsburghers march across the 10th Street Bridge on their way from South Side to Downtown as part of Alliance for Police Accountability and PA United’s “Every Voice Heard, Every Voice Counted” celebration following Biden-Harris’ projected win on Sat., Nov. 7.

This year was the last time Pennsylvanians will be voting in the current state legislative and congressional districts. The districts will be redrawn, and it’s likely Southwestern Pennsylvania will lose a state House district and its state senate districts, and Lamb’s U.S. House district will likely grow and take in more conservative voters. This means some big changes to how the Democrats think about their political strategy in the region.

Even though the Republicans still control Harrisburg, the redrawing process won’t be gerrymandered thanks to the state Supreme Court decision against partisan gerrymandering in 2018. The maps have to be approved by a group of bipartisan lawmakers and officials, and since there are more Democrats than Republicans on the state Supreme Court, Democrats hold the tie-breaking vote in that process.

Also, there could be a silver lining to some of Western Pennsylvania Democrats losing this cycle. With two long-time Democratic lawmakers likely losing (House Minority Leader Frank Dermody and state Rep. Joe Petrarca), Democratic map makers no longer have to worry about including those representatives into their maps. And since both those officials represent areas where Republicans are gaining ground, Democrats can instead focus on drawing districts in the suburbs. And with Democrats now clustering more in cities and suburbs, these districts likely could be more compact and sensical than previous districts.