"You form relationships over music; that's a way to get close to someone." 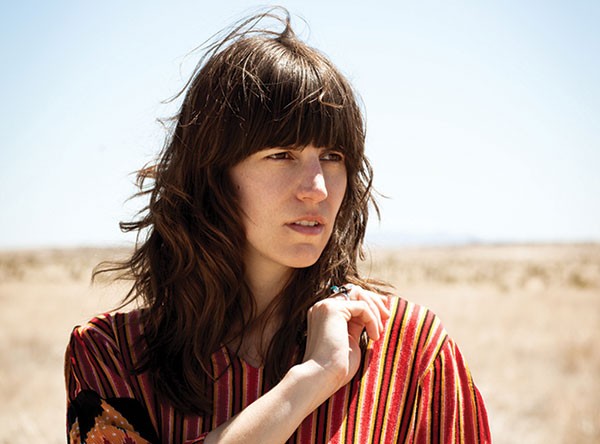 Photo courtesy of Roger Kisby
Out of the Furnaces, for now: Eleanor Friedberger

After releasing eight albums in six years, it made sense that The Fiery Furnaces would take a break. Siblings Matthew and Eleanor Friedberger often wrote complex pieces that would insert an entirely different tune or mood in places where most musicians would simply change chords. So it could be argued that their output was at least double that of most bands of the same tenure anyway.

At the start of their hiatus, Matthew stayed on the esoteric path. He recorded six albums that each utilized just one instrument, plus another album inspired by silent-film soundtracks. Eleanor, who handled most of the singing and occasionally played guitar for the band, maintained her vivid lyrical knack but took the music in a more straightforward pop direction on 2009's Last Summer. Earlier this month, she returned with Personal Record, which ventures even further toward classic pop without sacrificing any of the idiosyncrasies of her work with her brother.

One thing that shaped the sound of Personal Record relates to the fact that Friedberger collaborated with novelist Wesley Stace on all the songs. If Stace's name doesn't ring a bell, his nom de musique might: John Wesley Harding. The two met at a Bob Dylan tribute show, hit it off and began turning each other on to different music. Stace set her onto obscure British songwriters like Duncan Browne and Patto. She sent him "crackly reggae covers" and songs by Donovan. "We never said, ‘Hey, do you want to write some songs together,'" Friedberger says, from her home in New York. "He wrote me something and then I turned it into a song and recorded it and sent it back. And it kept going from there.

"We worked the 21st-century way, via email," Friedberger says. "I would send him demos. And he sent me his demos back. It was a kind of back-and-forth process that happened over the course of a few months, really. ... If it hadn't happened easily and naturally, I can't imagine trying to force something like that to happen." (Stace, who has also collaborated with Pittsburgh expatriate rocker Ed Masley, plans to release his take on a few of the songs with his next album.)

Friedberger's songs have always been marked by storylines that combine the everyday with a somewhat absurd worldview. While they have a feeling that would indicate pre-planned story ideas or scenarios, Friedberger says her approach starts at a more basic level. "I think it's more about emotion — whether it's longing or anger or disappointment," she explains. "And then you think of specific details to describe that. With my last album I was remembering and describing very specific events. I didn't have to make up a story. Those were real stories."

Personal Record is, in fact, another set of personal stories, but this time they incorporate the experiences of both Friedberger and Stace. Things aren't cut-and-dried either. "These songs are specific details that are very true, some are about me, some are about him," she says. "It wasn't the point to recount stories of our lives. It was more to create these narratives that anybody could insert themselves into."

Nor is the subject matter completely clear. "Echo or Encore" could be a love song to a significant other, but it could also be a love letter to a recording studio. The shared affection for things like music is part of what sparked the collaboration. "That was the way that Wes and I started working together, and it's one of the magical things — forgive me for saying it that way — about making music," she says. "You do form these relationships with people over music. And that's a way to get close to someone. People who play music know that very well. People who don't play music know that very well, too. It's just that it's easy to relay. It's fun to try and describe that. Which is what we were trying to do."

Friedberger played a few solo shows, armed with just a guitar, when Last Summer was released, but prefers the comfort of a full band, which she'll have with her on the current tour. "There is kind of a sick thrill to standing onstage alone with a guitar. But to me, it's not musical," she says. "It's almost like I think of it as giving a speech or doing a talk instead of performing music. But it's fun, it's just something ... different."

By the time of the Fiery Furnaces' most recent album — I'm Going Away (2009) — the band had moved closer to hard rock, but it continued to rearrange songs in concert that sometimes varied drastically from the studio versions. After all that complexity and scores of lyrics to remember, Friedberger considers her own performances to be more relaxed. "The Fiery Furnaces shows felt like a race to me. It was very physical, which I liked and kind of got off on. These shows of mine don't feel that way to me. It's so much more about me — being on display," she says with a laugh. "That's kind of how it feels sometimes."

She and her brother Matthew have no immediate plans to reconvene, but she insists it will happen sometime. "As I like to say, it's a relationship. The band will last until the relationship ends, and that relationship will end when we die," she says.